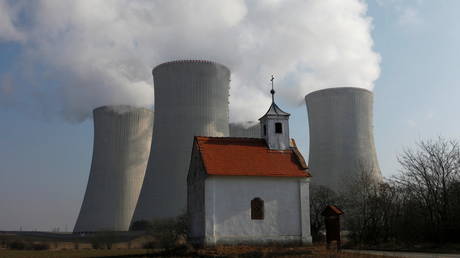 Russiaâ€™s nuclear energy corporation Rosatom wonâ€™t be invited for a security assessment as a bidder vying to renovate the Dukovany nuclear power plant, the Czech industry minister said, amid the diplomatic spat initiated by Prague.

The Czech government has approved a resolution effectively excluding the Russian company from the $7-billion project, the nationâ€™s industry and trade minister Karel Havlicek confirmed on Monday.

The construction projectâ€™s investor, the majority state-controlled Czech utility company CEZ, will now only send a security assessment questionnaire to the remaining three contenders by April 30. The companies vetted by Prague include Franceâ€™s EDF, South Korean Hydro & Nuclear Power as well as the American-Canadian firm Westinghouse.

â€œWe make it clear that this is an assessment of three eligible suppliers of nuclear technology,â€ Havlicek told the Czech media, adding that suppliers of critical technologies and materials can only be â€œan entity from a European Union or a NATO country,â€ meaning that Rosatom could not enter the project in collaboration with another company or as a subcontractor.

The decision was taken amid an ongoing diplomatic row between Prague and Moscow that followed the Czech governmentâ€™s decision to expel 18 Russian diplomats on Saturday. Prague claims Russian intelligence officers were involved in an incident at a munitions depot in the village of Vrbetice, some 330 kilometers southeast of Prague, back in 2014.

The depot was rocked by a series of explosions that killed two employees of a private company renting the facility from the military. The Czech authorities said that the embassy staff might also have had a role in the incident, while Moscow denounced all the accusations as absurd. Russia also expelled 20 Czech diplomats in a reciprocal measure.

Also on rt.com
Czech PM says Russia did NOT attack country, alleged blowing up of munition depot was â€˜not act of state terrorismâ€™

â€œI can’t imagine being contacted by Rosatom as part of a security assessment after the last incidents,â€ Havlicek said earlier on Monday. He added that â€œnone ofâ€¦ the candidatesâ€ would pass the assessment with â€œa supplier from Rosatom.â€

Previously, Prague already barred Chinaâ€™s General Nuclear from participating in pre-tender activities. Russia, however, was called a â€œkey energy partnerâ€ by Havlicek only in March. Some media reports suggested that NATO and EU security services, as well as Washington, repeatedly called on the Czech government to drop Russiaâ€™s bid, citing security issues.

Launched in 1985, the Dukovany nuclear power plant covers around a fifth of the electricity consumption in the Czech Republic. Under the refurbishment project, estimated to cost more than seven billion dollars, the plant will receive a new 1,200 megawatt-strong power unit.