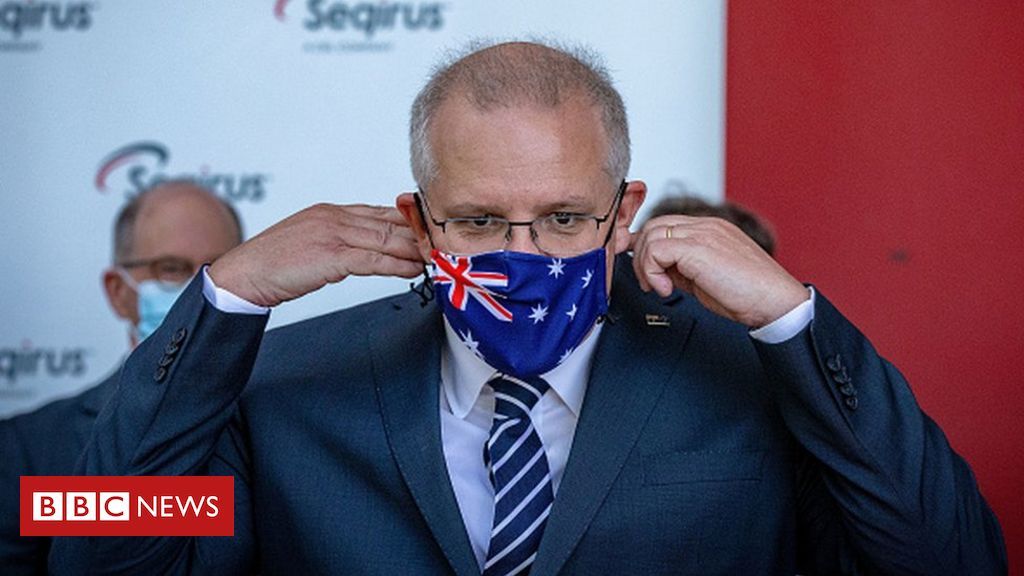 So far, Australia has been widely praised for its handling of the coronavirus.

But when it comes to vaccinations, it has fallen far behind other nations and has failed to meet its own goals.

Under fire, Prime Minister Scott Morrison has blamed the delay on the European Union’s block of some AstraZeneca vaccine shipments.

“[It] has been a supply problem. It is pure and simple,” he said at a press conference on Tuesday. “There were over three million doses from overseas that never came.”

The EU, however, says that only one shipment has been stopped so far and that AstraZeneca production and supply is a “global issue”.

But is this really the reason Australia’s vaccination programme has fallen so far behind?

Australia’s initial efforts in securing vaccines appeared promising. It was among the first to announce an order with AstraZeneca, and also trumpeted its local manufacturing capacity with medical firm CSL.

Australia is using a mix of vaccines, including the Pfizer and potential Novavax products, to immunise its population of 25 million people.

It is most reliant on the AstraZeneca vaccine. Last year it placed an order for 54 million doses – 3.8 million of which were to be made overseas. Those doses were due to delivered by February.

However in January, as European authorities faced third waves in their own countries, they issued an export ban on some vaccine orders. Reacting to that, AstraZeneca warned Australia that it would only be able to supply about a third of the initial 3.8 million order.

Acting on this advice, in February, Australia applied for the release of a much smaller batch. But in March, the European Commission blocked the shipment of 250,000 doses to Australia. It argued Australia had very low local infection rates and there was a greater need for the vaccine in Europe.

At the time, the Australian government downplayed the move. Health Minister Greg Hunt said “one shipment” wouldn’t affect Australia’s rollout plans. The 250,000 doses had not even been factored into the first phase, he added.

Mr Hunt also highlighted Australia’s local capacity. CSL would soon be producing about one million doses a week, he claimed. Domestic production began in late March but that target has not yet been met.

How has Australia’s rollout progressed?

Australia is up to stage two of its four-phase rollout. Doses are currently being offered to people over 70, those in aged care homes, frontline health workers, emergency services workers, Aboriginal and Torres Strait Islander people over 55, and people with underlying health conditions.

Still, fewer than one million people have so far received a vaccine. Falling so short of its March target has escalated concerns among the public.

Mr Morrison said Australia had only received 700,000 doses of its original AstraZeneca order and was missing 3.1 million doses.

In response, the European Commission on Tuesday denied holding up any further applications from Australia, adding that it had not blocked any further shipments apart from the 250,000 doses.

But the numbers are contradictory. The EU says one figure. Australia says another.

At a press conference on Wednesday, Mr Morrison claimed the situation was “straightforward maths”.

“3.1 million out of 3.8 million doses did not come to Australia. That obviously had a very significant impact on the early rollout of the vaccination programme.

“Now, I am pleased to hear that the European Union overnight has indicated that they are not seeking to restrict these vaccines to Australia,” he said. He added that Australia would again request the full amount of doses.

He also stressed that Australia on 17 March had applied for one million doses to be released to be donated to Papua New Guinea as part of a humanitarian effort. The neighbouring nation, historically reliant on Australian aid, has been battling a rampant virus outbreak.

“We do not comment on the contacts that exist between the European Commission and various actors,” the European body responded on Wednesday.

However, a spokesman for the European Commission denied that the problem was unique to Europe: “We’re not the only region in the world producing AstraZeneca vaccines. And therefore this is a global issue.

“It is definitely not simply a bilateral issue between one country and the European Union.”

So, who is to blame?

Australia’s contradictory statements on the impact of the European block on AstraZeneca supplies have left many confused.

Questions have also been raised over why the government failed to make contingency plans when it was warned about supply issues in January.

Experts say it has also been hard to assess Australia’s vaccine progress given the lack of public information.

For example, Australians are given daily updates on how many people have received a shot. But there are no details on how many doses exist in the country, or the rate of local production at CSL.

The government said this week it would look at providing better public data.

Still, critics note that the government had previously dismissed or failed to respond to concerns from people on the front line since the programme began.

Doctors administering the vaccine at clinics have spoken out about shortages, for instance, while the nation’s GP union had also raised concerns.

Two state governments – New South Wales and Queensland – have accused the federal government of failing to provide certainty over how many vaccines would be delivered. This, in turn, slowed down scheduling appointments.

“We are so far behind every single commitment Scott Morrison and Greg Hunt has given to the Australian people,” Labor opposition health minister Mark Butler said on Wednesday. “Surely, they must admit this is not going well.”

Mr Morrison has said that once the vaccine is offered to the wider population around mid-year, the pace will accelerate.

But the targets now have been adjusted too. Instead of having all Australians fully vaccinated by October, the government is now aiming for everyone to just have had their first shot.