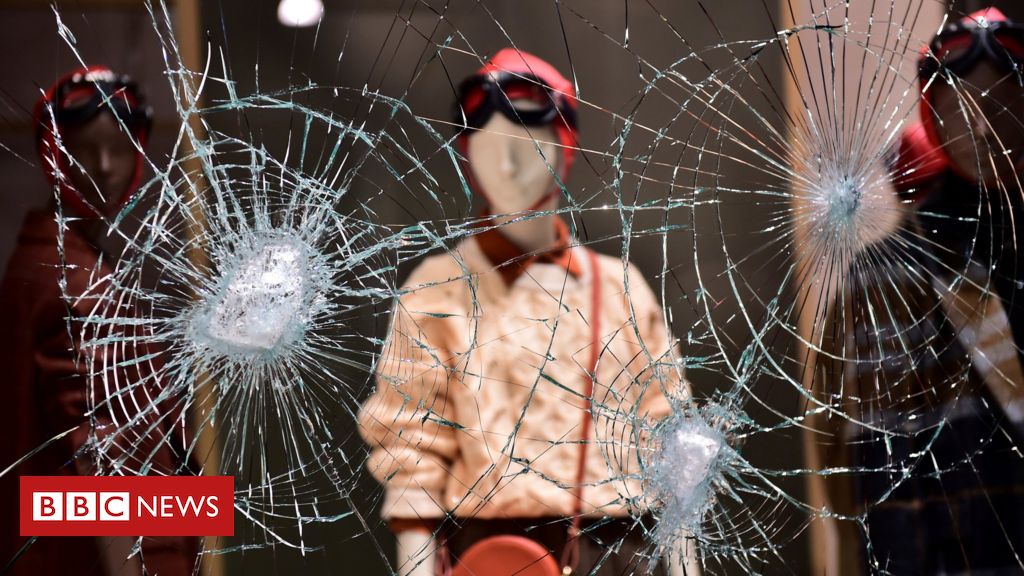 Protests took place across Italy on Monday over new restrictions to curb the country’s second wave of Covid.

Clashes were reported in the northern cities of Milan and Turin, where petrol bombs were thrown at officers.

In Milan tear gas was used to disperse protesters, and thousands of people gathered in the centre of Naples.

The demonstrations began soon after the national government’s order to close restaurants, bars, gyms and cinemas came into effect at 18:00 local time.

Many regions have also imposed night-time curfews – including Lombardy, where Milan is, and Piedmont, where Turin is. The violence was blamed on extremist agitators and police said 28 people had been arrested in Milan alone.

Protests took place in about a dozen other cities, including Rome, Genoa, Palermo and Trieste. Taxi drivers occupied a central square in Turin while restaurant owners beat pots and pans in the centre of Cremona.

In Naples, a big crowd gathered in the central Piazza del Plebiscito, many calling on the regional governor to resign.

While an initial national lockdown earlier this year was complied with little resistance, the announcement of renewed measures has been met with immediate pushback.

Small businesses argue that they are still recovering from that first lockdown, and that more restrictions could bankrupt them.

A number of luxury stores in central Turin, including a Gucci boutique, were ransacked by crowds that spilled into the streets after the rules came into force.

Demonstrators let off firecrackers and lit flares, while police in riot gear responded with tear gas.

In Milan, crowds chanted “Freedom, freedom, freedom!” as they clashed with police in the city centre. The city is the capital of Lombardy, which has been particularly hard hit by the virus.

What measures has Italy introduced?

Restaurants, bars and cafes must stop table service at 18:00 and offer only take-away until midnight. Contact sports are prohibited but shops and most businesses will remain open.

The new restrictions, which are in force until 24 November, will also see 75% of classes at Italy’s high schools and universities conducted online instead of in a classroom.

Regional governments had asked for all classes to be conducted via distance learning, Italian media reported, but the move was opposed by Education Minister Lucia Azzolina.

The government is also urging people not to travel outside their home towns or cities unless absolutely necessary and to avoid using public transport if possible.

“We think that we will suffer a bit this month but by gritting our teeth with these restrictions, we’ll be able to breathe again in December,” Prime Minister Giuseppe Conte told a news conference on Sunday.

Gyms and pools have also closed in the Belgian capital Brussels, and shops must shut at 20:00. Masks are now compulsory in public spaces. These rules will remain in force until 19 November.

Meanwhile doctors in the Belgian city of Liège have been asked to keep working, even if they have coronavirus. The head of the Belgian Association of Medical Unions told the BBC they had no choice if they were to prevent the hospital system collapsing within days.

In the UK, people aged 16 to 25 are more than twice as likely as older workers to have lost their job during the pandemic, BBC Panorama has found. Research seen by the programme also suggests the education gap between privileged and disadvantaged young people has widened further.

In France, health experts have warned that the number of new Covid-19 cases per day could be about 100,000 – twice the official figure.

Prof Jean-François Delfraissy, the head of France’s scientific council which advises the government on the pandemic, said the estimated figure included undiagnosed and asymptomatic cases.

He told RTL radio he was surprised by the “brutality” of the second wave which he expected to be much worse than the first, adding: “Many of our fellow citizens have not yet realised what awaits us.”

France has already imposed night-time curfews on major cities, including Paris. The country has recorded more than 1.1 million cases in total and 34,780 deaths.

The Czech Republic has also introduced a night-time curfew, which came into effect on Tuesday at midnight for a week. Nobody will be allowed to leave their homes between 21:00 and 04:59 each night except to travel to and from work, for medical reasons or a few other exceptions. All shops will be shut on Sundays and will close at 20:00 on other days.

Spain has declared a national state of emergency and imposed a night-time curfew amid a new spike in Covid-19 infections.

Prime Minister Pedro Sánchez said the curfew, which came into force on Sunday night, would be in place between the hours of 23:00 and 06:00.

Under the measures, local authorities can also ban travel between regions. Spain has seen more than one million cases and 34,750 deaths.

Russia has registered a record 17,347 new daily coronavirus cases, officials said on Monday. Total reported cases have surpassed 1.5 million – but the mayor of the worst-hit city, Moscow, said that while “there is still growth… it is slower”.