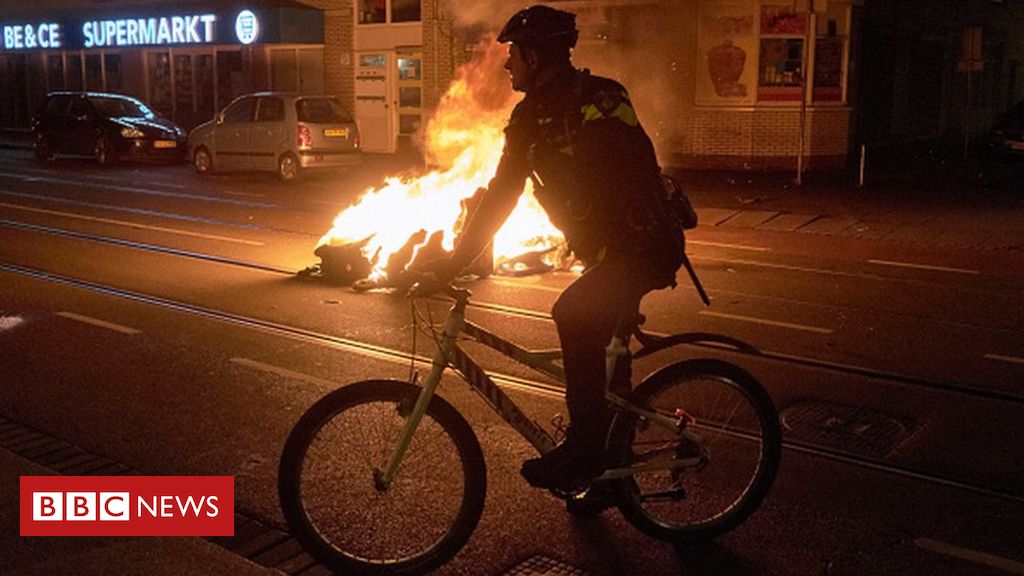 More than 180 people were arrested in 10 Dutch cities as protesters defying a curfew clashed with riot police for a third night running.

The Dutch chief of police said the riots no longer had “anything to do with the basic right to demonstrate”.

The Netherlands has had nearly one million confirmed Covid cases since the start of the outbreak, with more than 13,500 deaths, according to Johns Hopkins University in the US, which is tracking the pandemic.

What happened on Monday night

There were further violent scenes in many towns and cities. Riot police clashed with protesters in Rotterdam and Amsterdam, as well as Amersfoort, Den Bosch, Alphen and Helmond.

Some of the worst disturbances were in the south of Rotterdam where police said 10 officers were hurt. Across the country 184 people were arrested. Amsterdam’s mayor appealed to parents to keep young people indoors.

Fires were lit on the streets of The Hague, where police on bicycles attempted to move small clusters of men who threw stones and fireworks. There was violence in the southern city of Den Bosch, where rioters set off fireworks, broke windows, looted a supermarket and overturned cars.

A woman living near Den Bosch train station told Dutch radio that masked youths had left a trail of destruction in the city centre. “I saw windows smashed and fireworks going off. Really crazy, just like a war zone,” the woman said. Roads into the city were closed to stop people joining the rioters and Mayor Jack Mikkers imposed an emergency order banning gatherings on Tuesday.

What’s behind the riots?

The ignition of discontent has rocked the core of Dutch society.

In the absence of any legitimate way to socialise, is this simply an outlet for young men to feel part of something, their masks concealing their identities and enabling them to violently channel their frustrations?

There are more sinister influences at play. Messages on social media, overt and covert, have whipped up anger. Misinformation has even been spread by some politicians.

Some feared a curfew would be a tipping point, as Dutch restrictions tighten while some neighbouring countries relax their rules. The vast majority of people in the Netherlands are peacefully observing the curfew.

The unrest was initially seen as a response to the first “stay-at-home” order imposed since Nazi occupation during World War Two. That notion has been dismissed by Prime Minister Mark Rutte, who said the rioters were simply criminals and would be treated as such.

But there are simmering anxieties in Dutch towns and cities, and with less than two months before a general election, voters are vulnerable and the streets volatile.

How Netherlands has reacted

There has been widespread shock at the violence. In Rotterdam, where police used water cannon during clashes with rioters, Mayor Ahmed Aboutaleb signed an emergency decree, giving police broader powers of arrest. He reacted furiously to shops being looted in the south of the city, condemning “shameless thieves, I can’t call it anything else”.

The prime minister said the police had the government’s full support: “The riots have nothing to do with protesting or fighting for freedom.”

Rotterdam shop-owner Emrah Köker said he had no words for what he had seen. “How can this happen in the Netherlands?” he asked Dutch daily newspaper Algemeen Dagblad. Justice Minister Ferd Grapperhuis challenged anyone to explain what looting a shop had to do with coronavirus.

The mayor of Den Bosch said police had struggled to respond to the violence because they were needed in other nearby towns.

Football fans of the Willem II club took to the streets of Tilburg to “protect their city” against rioters, news site Brabants Dagblad reports.

Mayors in several cities have vowed to introduce emergency measures in an effort to prevent more disturbances.