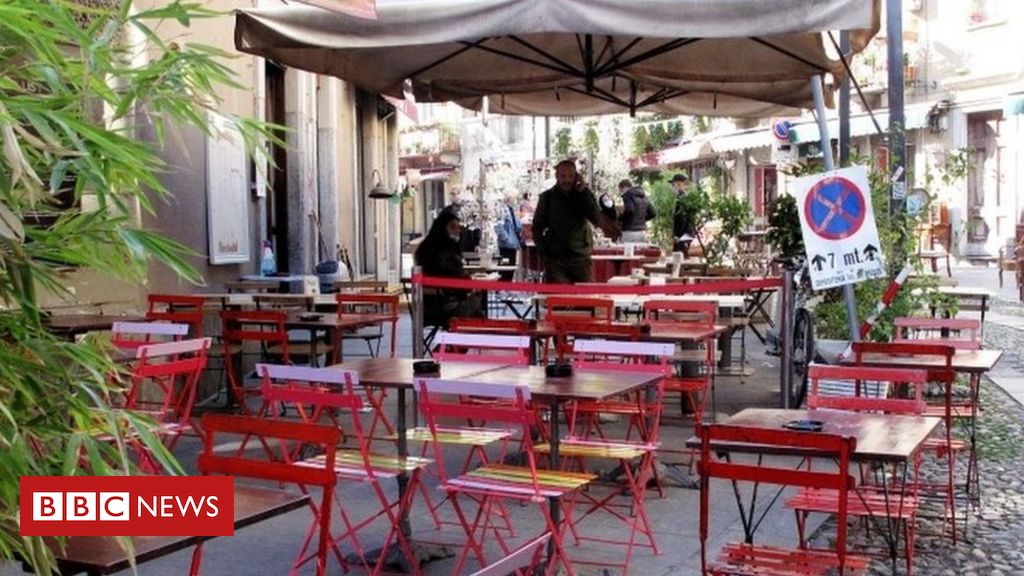 Italy has announced a new raft of measures to tighten restrictions amid a surge in coronavirus cases.

A mask-wearing PM Giuseppe Conte said the measures were needed “to avoid a new lockdown”.

Mayors will get powers to close public areas after 21:00 and the opening times of restaurants and the size of groups allowed will tighten.

The moves came as Italy recorded its highest daily infection rate for the second day in a row.

Another 11,705 new cases were announced on Sunday, beating the previous record, which came a day earlier on Saturday, of 10,925.

Italy was the European nation hardest hit at the start of the pandemic. It has now recorded 414,000 confirmed coronavirus cases. Its 36,500 deaths place it second to only the UK in Europe.

What did Mr Conte say?

The prime minister said in a televised address on Sunday evening: “We cannot waste time, we must put in place measures to avoid a generalised lockdown, which could severely compromise the economy.

“The government is here but everyone has to do their part.”

He added: “The most effective measures remain the basic precautions: mask, distance and hand hygiene. We must pay attention to situations where we let our guard down – with relatives and friends. In these situations, the maximum precaution is required.”

What are the other Italian measures?

How is Europe coping with a surge in cases?

A number of nations have strengthened their approach to coronavirus as the so-called “second wave” of infections continues to increase.

France saw a record number of new cases on Saturday at 32,427 and there was close to another 30,000 on Sunday.

However, the rise in confirmed cases in Europe has to be set against the vastly increased testing that is now taking place compared to the first big wave back in March.

From Monday, all bars and restaurants in Belgium will be closed for four weeks, and a curfew will be in force from 00:00-05:00. with the sale of alcohol banned afer 20:00.

“I am fully aware that those measures are very, very severe,” said Belgian Prime Minister Alexander De Croo. “The coming weeks will be very difficult but we must take those measures to avoid the worse.”

Switzerland on Sunday reacted to a sharp increase in infections by making the wearing of face-coverings in indoor public spaces compulsory from Monday. Gatherings of more than 15 people in public are also banned.

The Czech Republic said on Sunday it would wait two weeks before deciding on whether a full lockdown was needed. The country currently has the highest coronavirus infection rate in Europe and has closed most of the hospitality sector and moved schools to distance-learning.

Ireland is set to announce tighter restrictions on Monday. A minister said a localised policy had not been sufficient and implied the cabinet was looking at a “level four” approach that would close all non-essential businesses.

Germany hit a daily record of new infections on Saturday and Chancellor Angela Merkel urged people to stay at home and avoid travel where possible.

In the Netherlands, PM Mark Rutte admitted he should have given better advice to the royal family after they cut short a trip to Greece amid public anger that they were holidaying shortly after the government had introduced a partial lockdown.