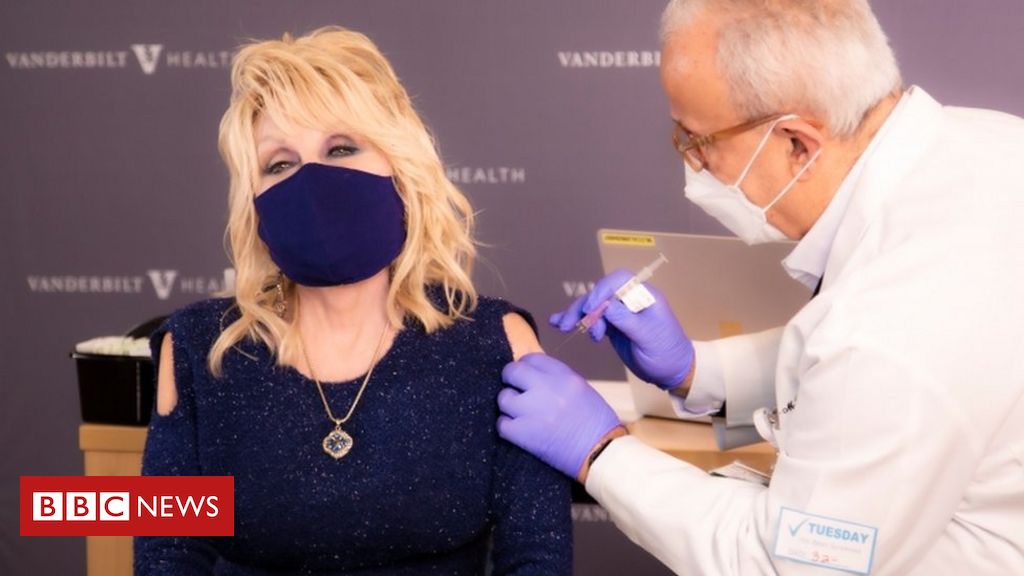 Country star Dolly Parton has been given a Covid-19 vaccine dose, after urging others to follow her example by reimagining one of her hit songs.

Parton, 75, sang an adapted version of Jolene before receiving the shot at Vanderbilt University Medical Center in Nashville, Tennessee on Tuesday.

She was injected with a vaccine developed by Moderna.

The Grammy-winning musician said she had been “waiting a while” for her vaccination.

Last month Parton told the Associated Press she wanted to wait until vaccines were more widely available because “I don’t want it to look like I’m jumping the line”.

Now vaccine supply has increased – in the US at least – Parton said she “wanted to encourage everybody” to get theirs.

“I just want to say to all of you cowards out there – don’t be such a chicken squat. Get out there and get your shot,” she said.

The 9 to 5 singer is the latest star to promote coronavirus vaccinations.

Other celebrities who have had a Covid-19 vaccine include:

The naturalist and broadcaster, 94, received the Covid-19 jab in January, months after speaking of the “immense suffering” caused by the pandemic.

The Academy Award-winning actress, 83, shared the news of her jab in an Instagram post in February, posting: “It doesn’t hurt”.

The veteran actor, 81, was vaccinated at Queen Mary’s University Hospital in London, saying afterwards that he felt “euphoric”.

The former politician and action hero, 73, had his jab in January in Los Angeles and nodded to one of his best-known movie lines when he said: “Come with me if you want to live.”

The Broadway singer and actress, 75, announced she got the Pfizer vaccine on US talk show Jimmy Kimmel Live in February.

The pair urged the public to get vaccinated against coronavirus in an National Health Service (NHS) advert released in February.