Home World USA Couple Who Defaced $400,000 Painting in South Korea Thought It Was a... 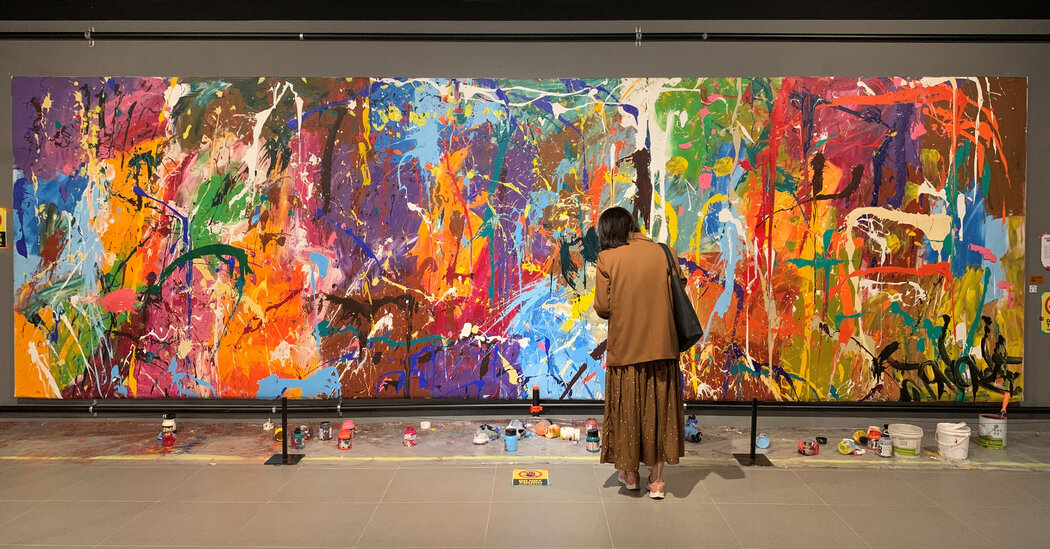 Asia Pacific|Couple Who Defaced $400,000 Painting Thought It Was a Public Art Project

SEOUL — The couple saw brushes and paint cans in front of a paint-splattered canvas at a gallery in a Seoul shopping mall. So they added a few brush strokes, assuming it was a participatory mural.

Not quite: The painting was a finished work by an American artist whose abstract aesthetic riffs on street art. The piece is worth more than $400,000, according to the organizers of the exhibition that featured the painting.

Either way, the piece, “Untitled,” by John Andrew Perello, the graffiti artist known as JonOne, is now a magnet for selfies. And on social media, South Koreans are debating what the vandalism illustrates about art, authorship and authenticity.

The artwork is displayed with paint cans, brushes and shoes that the artist used when he worked on it, one of the exhibition’s organizers, Kang Wook, said in an interview. He added, “There were guidelines and a notice, but the couple did not pay attention.”

Some social media users have echoed Mr. Kang’s reasoning. Others say the sign was confusing and the couple should not be blamed.

A few suggest that the incident itself was a form of contemporary art, or that the couple’s abstract brush strokes — three dark-green blotches covering an area about 35 inches by 11 inches — have improved the piece.

The debate is notable in part because the crime was not intentional and the painting can be restored, said Ken Kim, an art restoration expert in Seoul who has seen the vandalized work.

The painting is part of “Street Noise,” an exhibition that opened at Lotte World Mall in Seoul in February and features about 130 artworks by an international group of more than a dozen graffiti artists. Mr. Kang said the staff at the mall noticed on March 28 that the painting had been vandalized, and identified the couple by checking security footage.

The couple were arrested but released after the police determined that the vandalism was accidental, the local news media reported. Mr. Kang said the couple told the police that they had thought the artwork was open to public participation.

The couple have not been identified and could not be reached for comment.

The artist, JonOne, said in an interview on Wednesday that he was disappointed and angry that his work had been “defaced,” although some people have said the publicity could work in his favor.

“Art should be religious,” he said. “You don’t paint on a church.”

JonOne said the vandalism of his work in Seoul reminded him of growing up in New York City and the feeling that his talent was not appreciated.

As a teenager, he would sign his graffiti with the tag “JonOne.” His style later became more abstract, although he continued to use graffiti lettering as the foundation for his work. Now 57 and living in Paris, he has described his aesthetic as “abstract expressionist graffiti,” a nod to Jackson Pollock and other American artists who redefined modern painting in the years after World War II.

Julien Kolly, a gallerist in Zurich who specializes in graffiti art and has exhibited JonOne paintings over the years, said that they often prompted strong reactions from viewers.

“Some are full of praise and others think that a child could do better,” he said. “Of course, I am in the first category.”

Mr. Kolly said that he wondered why the couple who vandalized “Untitled” in Seoul thought they could “intervene” in an artwork that was hanging in a gallery — but also that he did not think they intended to “destroy” it.

“I can understand that people may have thought that they could, at the very least, do better than the artist by participating in this work,” he added.

Mr. Kang said a decision about whether to restore “Untitled” would be made before the exhibition ends on June 13. The restoration could cost about $9,000, he added, and the insurance company may find the couple partially liable for the cost.

“But we are concerned,” he added, “because there are many comments saying that the artwork should not be restored, and remain as it is.”