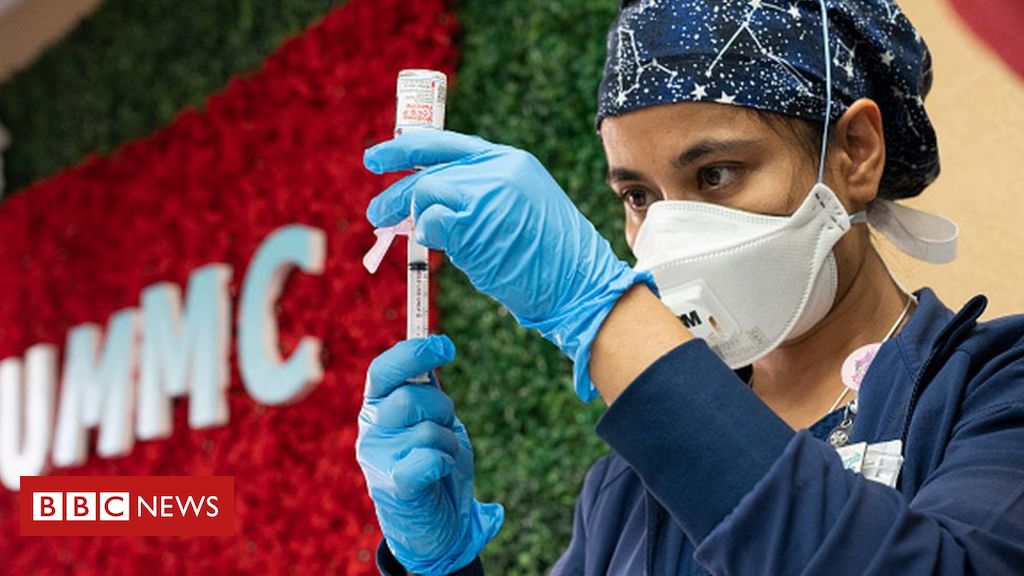 Texas will lift its mask requirement and allow businesses to reopen at full capacity next week, Governor Greg Abbott has announced.

“It is now time to open Texas 100%,” the Republican said on Tuesday.

Texas is the largest US state to end its mask mandate. Mr Abbott has faced criticism from his party over the measure, which was imposed last July.

But the administration of US President Joe Biden has made it clear coronavirus restrictions are still necessary.

The announcement in Texas came as similar rules were lifted in other states, including Michigan, Louisiana, and Mississippi, which also ended its mask mandate.

The roll-out of vaccinations against Covid-19 has boosted confidence in a return to pre-pandemic life in the US.

On Tuesday, President Biden said the US was on track to have enough vaccines for every adult in the country by the end of May.

Yet the wave of reopenings has put states at odds with the Biden administration and its senior health officials, who have reacted with dismay to the relaxation of coronavirus measures at a precarious time in the pandemic.

On Monday the director of the US Centers for Disease Control and Prevention (CDC) warned of a “potential fourth surge of cases” if the country lapsed into complacency.

Covid-19 data shows that, while infections and deaths have declined in recent weeks, they are still at high levels relative to other countries.

In total, the US has recorded more than 28 million infections and 516,000 deaths related to Covid-19, according to data collated by Johns Hopkins University.

What did the Texas governor announce?

Mr Abbott issued an executive order that rescinded most of the coronavirus measures he imposed earlier in the pandemic.

The new executive order, which is to take effect on 10 March, lifts all mask requirements and forbids local authorities from penalising residents who do not wear a face covering.

It removes all restrictions on businesses in counties without a high number of Covid-19 patients in hospital.

“Too many Texans have been sidelined from employment opportunities,” Mr Abbott said in a speech at the Chamber of Commerce in the city of Lubbock. “Too many small business owners have struggled to pay their bills. This must end.”

He said that with increased vaccinations and improved treatment for Covid-19, the state was “in a far better position now”.

But, he added, “Covid has not suddenly disappeared”. Following weeks of decline, coronavirus infections and related deaths are creeping up again in Texas, data from the Covid Tracking Project showed.

Texas has recorded more than 43,000 deaths related to Covid-19, the third-highest state toll in the US.

Governor Abbott’s announcement was no surprise to Texans. After all, the state’s pandemic response has been political from the start.

It was control of the disease vs control of the economy. Mask requirements vs maintaining personal liberties. And when the surges came, state politicians were more reactive than proactive.

A year later, not much has changed. The state’s death toll and current case rate are still among the highest in the US. That’s why critics say Governor Abbott’s decision does not follow the science.

So the decision will be a test to the state – but also to Mr Abbott’s relationship with President Biden, who has addressed the pandemic with more urgency than his predecessor.

What about other US states?

Individual states are in charge of public health policy in the US. At the start of the coronavirus pandemic, most introduced restrictions on businesses and travel.

About 35 required face coverings to be worn in public places – either or outdoor – although enforcement of these mask mandates has been patchy.

With cases and deaths falling sharply in recent weeks, several states have begun easing the restrictions.

Shortly after Mr Abbott’s announcement, Mississippi Governor Tate Reeves said he would do the same in an even shorter time frame.

“Starting tomorrow, we are lifting all of our county mask mandates and businesses will be able to operate at full capacity without any state-imposed rules,” Mr Reeves said.

Health experts have warned that the pandemic was far from over and cases could pick up if curbs were lifted too soon.

President Biden – in contrast with his predecessor Mr Trump – has made fighting the virus a priority for his administration.

On Tuesday, Mr Biden said he was upbeat about reaching his goal of delivering 100 million Covid-19 vaccine doses in his first 100 days in office, but urged Americans to remain vigilant in wearing masks and observing social distancing.

“Today’s announcements are a huge step in our effort to beat this pandemic,” Biden said in a televised statement from the White House. “But I have to be honest with you. This fight is far from over.”

How has Covid affected the US?