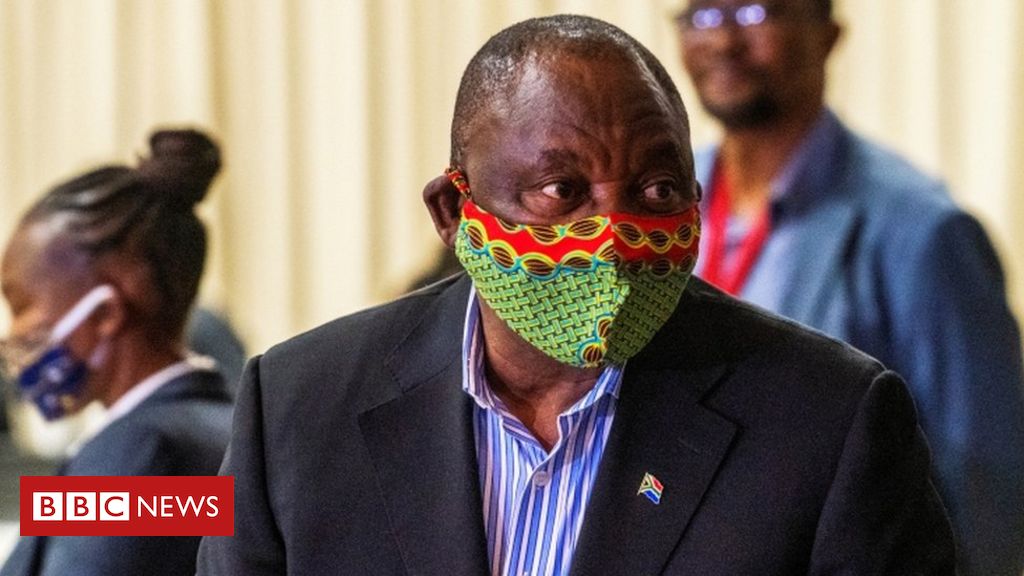 South Africa’s President Cyril Ramaphosa is self-quarantining after a guest at a dinner he attended later tested positive for Covid-19.

The president is not showing symptoms and will perform his duties remotely, his office said in a statement.

Mr Ramaphosa is the latest world leader forced to self-quarantine.

US President Donald Trump and UK Prime Minister Boris Johnson are among leaders who have contracted Covid-19.

In March, Mr Ramaphosa had imposed one of the strictest lockdowns in the world to curb the spread of the virus, but later eased restrictions.

Mr Ramaphosa would be tested “should symptoms manifest”, and was currently in self-quarantine, his office said.

The president attended a fundraising dinner hosted by the Adopt-a-School Foundation at a hotel in the commercial hub of Johannesburg on Saturday.

Mr Ramaphosa set up the foundation in 2002 to improve schooling for children from disadvantaged backgrounds.

His office said the dinner was attended by 35 guests – one of whom showed symptoms the following day and test results received on Tuesday confirmed he had Covid-19.

“The event adhered stringently to Covid-19 protocols and directives on screening, social distancing and the wearing of masks.

“The president himself removed his mask only when dining and addressing the guests,” the president’s office said.

The statement did not say where Mr Ramaphosa is quarantining, but South Africans are required to do so at home for 14 days.

A maximum of 250 people are currently allowed to gather indoors, but the number must not exceed 50% of the normal capacity of a venue.

Could there be a return to stricter rules?

On Tuesday, Mr Ramaphosa said he would update the nation next week after studying the latest reports from health experts.

He ruled out the possibility of a return to a hard lockdown, but said he was concerned about people becoming “super spreaders” of the virus because of a lack of adherence to guidelines.

“We’ve been reading about reports of how groups of people have gone to various manifestations, it could be meetings, it could be parties, where infections have been reported, where people having gathered together have become super spreaders,” Mr Ramaphosa said.

Questions about why dinner party held

South Africans have reacted with mixed views to the news of the president’s possible exposure to Covid-19.

While some have expressed concern, others have questioned why the dinner party was held in the middle of the pandemic.

They argue that the guests could have simply made a financial donation to charity and limited the risk of infection.

Officials here have repeatedly warned South Africans about unnecessary public gatherings – this fund-raising event may be seen by some as a contradiction of official advice.

Is there a spike in cases?

Daily reported numbers have been stable after falling for about three months although there have been some spikes in some provinces, according to BBC Reality Check.

Health Minister Zwelini Mkhize has warned that the country could be experiencing a rise in positive cases in some provinces.

The Western Cape province – where Cape Town is located – recorded a 42% increase in cases during the seven days ending on 21 October.

One of the cluster of cases reported was linked to a “super-spreader” event at a bar in Cape Town.

“We define this significant spike in new cases in the Western Cape as a resurgence,” the minister says.

On Sunday, the premier of KwaZulu-Natal province also raised concern about a spike.

“Looking at the statistics we can now safely that we are definitely going back into a hard lockdown, if there is no urgent and drastic change in behaviour,” said Sihle Zikalala