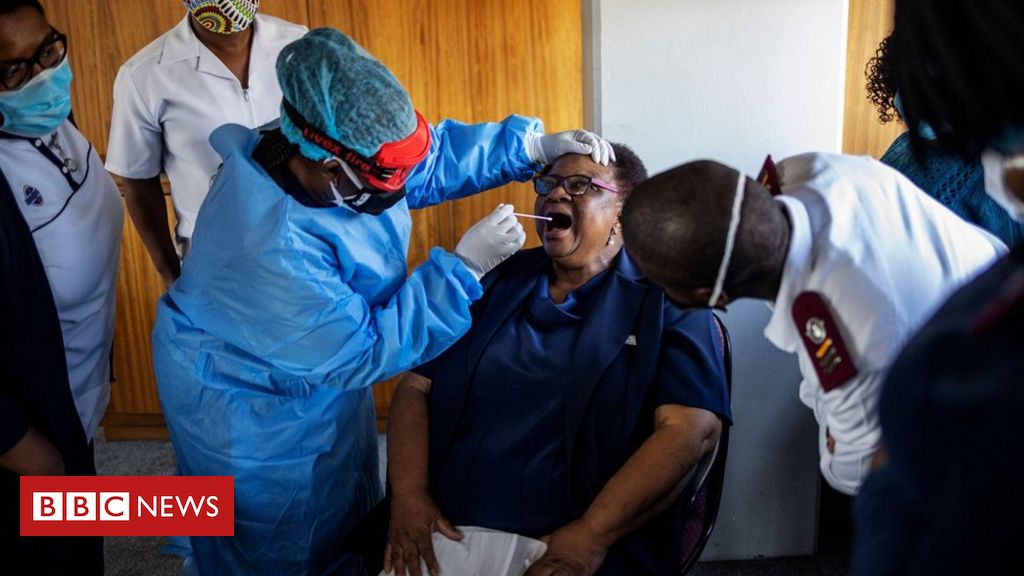 South African researchers say the number of deaths from coronavirus could be far higher than the official toll.

Professor Debbie Bradshaw, one of the authors, said it revealed a “huge discrepancy” in the numbers.

On Thursday the country said there had been a record 572 deaths in the last 24 hours.

South Africa currently has the fifth highest number of confirmed cases worldwide with more than 400,000 infections and a death toll of 5,940.

This is a far lower death toll than in other countries that have fewer confirmed cases, for example the UK.

In a televised address on Thursday, President Cyril Ramaphosa ordered the closure of public schools for four weeks amid the sharply rising case numbers.

What does the report say?

SAMRC released the Report on Weekly Deaths in South Africa late on Wednesday.

It shows that between 6 May and 14 July this year there were 17,090 excess natural deaths – far higher than in past years and higher than researchers had forecasted.

That number suggests there have been 11,000 unexplained deaths.

Prof Bradshaw said these reports “have revealed a huge discrepancy between the country’s confirmed Covid-19 deaths and number of excess natural deaths”.

Early on in the pandemic, South Africa recorded 9% fewer deaths on average compared to previous years, which has been attributed to a ban on alcohol and the national lockdown.

It is not clear if the higher number of deaths being recorded more recently is purely down to the pandemic, but researchers think this could be a factor. There are also concerns people are dying because they are staying away from hospitals, for fear of becoming infected or because of a lack of space.

SAMRC President Prof Glenda Gray said the rise “may be attributed to both Covid-19 deaths as well non-Covid-19 due to other diseases such as TB, HIV and non-communicable diseases, as health services are re-orientated to support this health crisis”.

On Thursday, Health Minister Zweli Mkhize told parliament by video link that the SAMRC figures were “comparable to countries like India and Russia, but significantly lower than the UK or Spain.”

How has South Africa been handling the pandemic?

South Africa is the worst affected nation on the continent.

President Ramaphosa imposed a strict lockdown in the country at the end of March, even banning the sale of cigarettes and alcohol in a bid to ease pressure on health workers.

The restrictions were enforced by soldiers on the streets in a bid to bring the outbreak under control. Authorities later lifted the alcohol ban as business reopened and people returned to work.

But infection numbers have soared in recent weeks. President Ramaphosa reintroduced the alcohol ban in July as the country grappled with a chronic shortage of hospital beds and state hospitals – on which 80% of the population depend – faced unprecedented strain.

Confirmed cases are now rising by more than 10,000 a day.

What about other African countries?

Overall, there are now more than 770,000 confirmed cases throughout Africa.

At the start of the month, the World Health Organization said five countries – Algeria, Egypt, Ghana, Nigeria and South Africa – account for more than 70% of all cases on the continent.

But there has also been a worrying rise in cases in countries like Kenya and Namibia in recent weeks.

Confirmed cases around the world

Please upgrade your browser to see the full interactive


Note: Data for Egypt can be found by selecting the Middle East region from the drop-down menu in both the map and country table below.