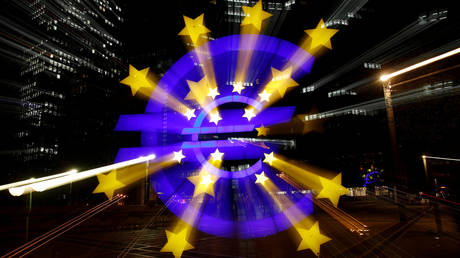 The 19 euro-area countries experienced the biggest GDP drop on record during the height of the coronavirus pandemic. The eurozone economy shrank 12.1 percent, while the EU economy as a whole contracted 11.9 percent.

The second-quarter preliminary reading is the lowest since records by the region’s statistics office Eurostat began in 1995.

The 19-member bloc that shares the euro currency had experienced a fall of 3.6 percent in GDP during the first quarter of 2020.

The German economy’s 10.1 percent contraction was its largest drop in GDP since the country began keeping quarterly records in 1970. Germany’s GDP fell by 5.7 percent in the aftermath of the 2009 crisis.


Senior economist at the Frankfurt-based ING bank Bert Colijn told the AFP news agency that the drop “doesn’t tell us that much about the general state of the economy” due to the unusual circumstances. “It is a shocking drop, but completely understandable as the economy was shut down for a considerable period during the quarter,” he said, adding: “The hard part of this recovery is set to start about now.”