Home World Coronavirus in South Asia: Is a lack of testing hiding scale of... 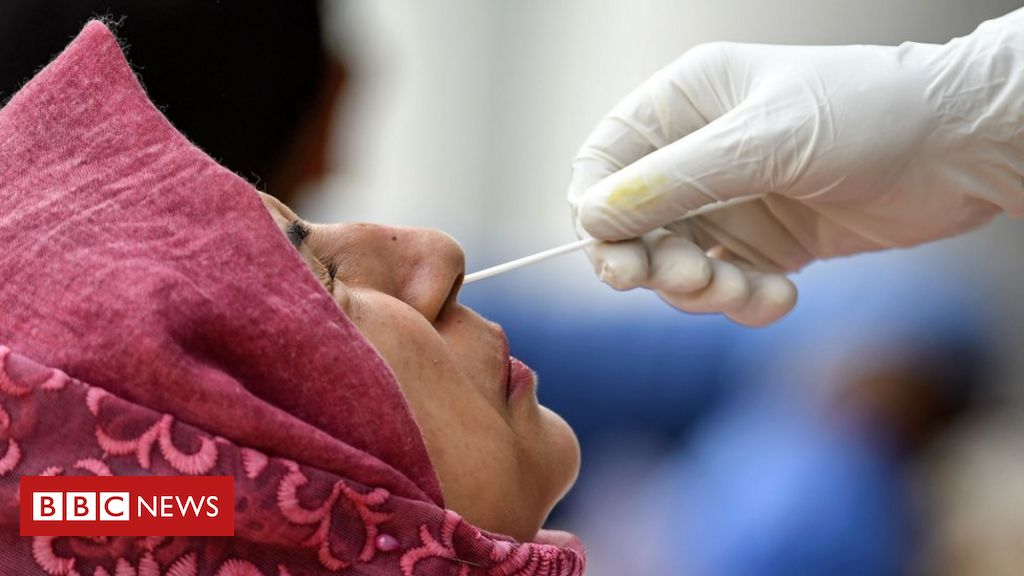 India has now crossed the million mark and has the third largest number of coronavirus cases in the world after the US and Brazil.

That’s not surprising given its huge population, but its smaller neighbours have also been hit hard by the virus.

With cases doubling every 20 days, India is now a global hotspot for coronavirus. The numbers are still rising fast.

However, the number of daily cases elsewhere in the region has followed a different trajectory, with confirmed infections showing a downward trend in most countries, after steep increases in May and June.

In Pakistan, with the second-highest number of total cases in the region, there is cautious optimism about the downward direction of the infection curve.

From a peak in mid-June of almost 6,000 new infections each day, that figure has fallen to less than 2,000 by mid-July.

However, concerns remain and some say it’s too early to conclude that the virus is under control.

Similarly, Bangladesh, which has seen a total caseload of 196,323 as of July 16, saw its highest daily cases between mid-June and the beginning of July.

After that, it has seen a downward curve in positive cases, with the infections currently doubling every 28 days.

Afghanistan’s doubling rate is slower than its neighbours’, currently every 41 days. But questions have been raised about the reliability of its official figures.

Nepal and Sri Lanka have much lower levels of infection overall. In Nepal, the government imposed a lockdown which went on for 100 days. In that period, most of the cases detected were in areas bordering India.

Recent trends show daily numbers coming down, but experts suggest that may partly be because cases in the community are going undetected.

Sri Lanka has had spikes of infections since April but has managed to keep numbers low. It has implemented a tight lockdown, traced contacts of positive patients and imposed strict quarantine rules for those infected.

Sri Lanka has recently lifted the lockdown ahead of forthcoming parliamentary elections.

South Asia has about a quarter of the world population, but only 11% of total recorded infections are from this region.

“Total number of cases per million in India and the rest of South Asia are low, but so is the number of tests per million,” says virologist Dr Shahid Jameel.

He says that while total numbers of tests in these countries seem high, when you compare it with the population size, the numbers have been “sub-optimal”.

For instance, India has scaled up its testing over time and has so far conducted 10.3 million tests. Pakistan has carried out more than 1.6 million.

But per capita tests in these countries are far lower than in many other countries.

Moreover, in Pakistan and Bangladesh, testing levels have fallen, which will have had an impact on the number of positive cases recorded.

Pakistan, at its peak, conducted over 31,000 tests per day, but this has been scaled down since the last week of June, and they are not testing those without symptoms.

A recent government survey conducted in and around the Pakistani capital, Islamabad, suggested that nearly 300,000 people may have been infected by the virus there alone, a majority of them asymptomatic.

Bangladesh’s testing numbers have also seen a downward trend, and the reliability of those tests has also been called into question because of a scandal around the sale of fake negative test certificates.

In Nepal, a little over 300,000 tests have been conducted as of July 16. The government had said earlier that they would conduct 10,000 tests per day from July, but testing remains low, at around 4,000 a day.

Testing data for Afghanistan is not available and the Red Crescent has recently expressed concern that the actual number of cases could be much higher than officially announced.

The World Health Organization (WHO) has set a benchmark range for adequate testing of between 10 and 30 per confirmed cases in a country or region.

South Asian countries fare poorly on this measure. Russia and Japan, which have populations similar to Bangladesh, are testing far more widely, finding a positive case every 32 and 26 tests respectively. But Bangladesh is identifying one positive case for every five tests carried out, which is well below the WHO benchmark.

Nepal was finding a positive case every 25 tests until June 14. Data after that is not available.

Deaths recorded in these countries are far lower than in western countries, whether we look at absolute numbers or per head of population.

This information is regularly updated but may not reflect the latest totals for each country.

** The past data for new cases is a three day rolling average. Due to revisions in the number of cases, an average cannot be calculated for this date.

This appears to be an encouraging sign, but it also calls into question the reliability of data in a region with a poor track record of spending on health infrastructure.

“Many deaths are not reported within the vital registration system and the causes of deaths are mis-classified,” said Professor Kamran Siddiqi, a public health expert at the University of York.

But Dr Shahid Jameel says even if the deaths are under-reported, the difference is “quite stark”.

“The most plausible explanation is that the populations in South Asia are made up of far more younger people than say in Europe and the US,” professor Siddiqi said.

The average age of the population in these countries ranges between 18 and 34.

Send us your questions