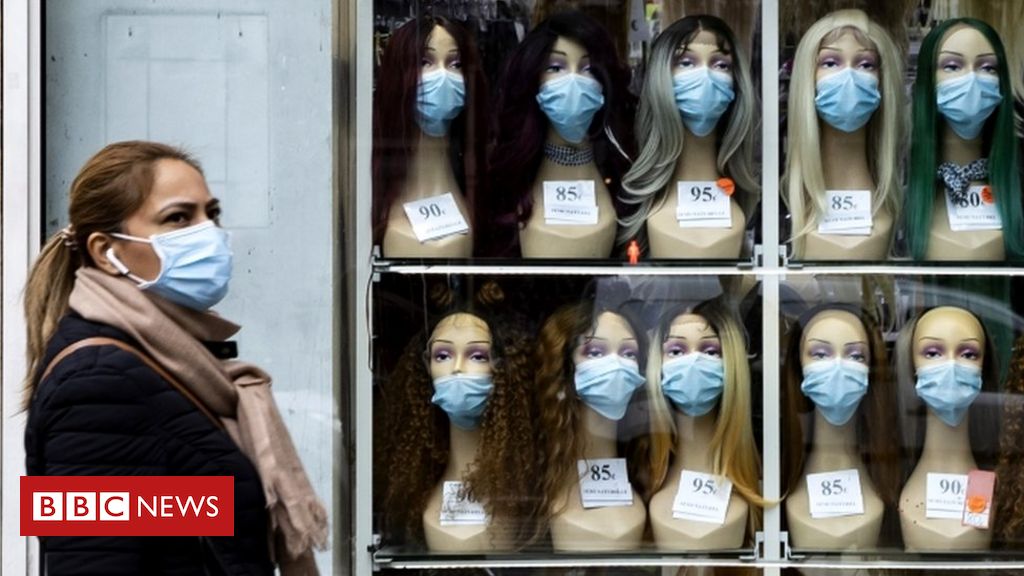 French President Emmanuel Macron has announced a second national lockdown until at least the end of November.

Mr Macron said that under the new measures, starting on Friday, people would only be allowed to leave home for essential work or medical reasons.

Non-essential businesses, such as restaurants and bars, will close, but schools and factories will remain open.

Covid daily deaths in France are at the highest level since April. On Tuesday, 33,000 new cases were confirmed.

Mr Macron said the country risked being “overwhelmed by a second wave that no doubt will be harder than the first”.

Meanwhile, Germany will impose an emergency lockdown that is less severe but includes the closure of restaurants, gyms and theatres.

Infections are rising sharply across Europe, including the UK which on Wednesday announced 310 new deaths and 24,701 new officially-recorded cases.

In England, a new study estimates almost 100,000 people are actually catching the virus every day, with researchers warning that “something has to change”.

Night curfews are in force in several countries, including for 46 million people in France.

News of the new restrictions being introduced in Europe’s biggest economies led to sharp falls in the financial markets on Wednesday. The UK’s FTSE 100 ended almost 2.6% lower, and Germany’s Dax dropped 4.2%. Major US indexes also sank 3.4% or more.

“We are deep in the second wave,” European Commission President Ursula von der Leyen said. “I think that this year’s Christmas will be a different Christmas.”

Why is France acting now?

In a televised address on Wednesday, Mr Macron said that France must now “brutally apply the brakes” to avoid being “submerged by the acceleration of the epidemic”.

“The virus is circulating at a speed that not even the most pessimistic forecasts had anticipated,” he said, adding that half of all intensive care beds at French hospitals were being occupied by Covid patients.

The president said that under the new rules, people would need to fill in a form to justify leaving their homes, as was required in the initial lockdown in March. Social gatherings are banned.

“Like in the spring, you will be able to leave your house only to work, for a medical appointment, to provide assistance to a relative, to shop for essential goods or to go for a walk near your house,” Mr Macron said.

But he made clear that public services and factories would remain open, adding that the economy “must not stop or collapse”.

Mr Macron added that visits to care homes – which were banned during the two-month lockdown declared in March – would be permitted under the latest measures.

The curbs will apply until 1 December and will be reassessed every two weeks. The president said he retained “hope that families will be able to be reunited for Christmas”.

A new French lockdown – with differences

The French government has been taken by surprise by the virulence of this second Covid wave. Some 50,000 new cases a day are being reported and that’s probably a big underestimate.

The proportion of critical beds occupied by Covid patients is now 70% in Paris. The new restrictions announced by President Macron on Wednesday are similar to measures introduced in March, but with some key differences.

For business, it’s going to be another massive blow – especially for sectors like entertainment and events. The president promised help for French firms, but did not provide details.

After the economy picked up in the third quarter, it now looks inevitable that it’ll contract again between now and the end of the year, and for the whole of 2020 the government’s predicting a 10% fall in GDP.

What about Germany’s new restrictions?

Earlier, German Chancellor Angela Merkel said her country had to “act now” and called for a “major national effort” to fight the spread of coronavirus.

While Germany has a lower infection rate than many other parts of Europe, the speed with which the virus has been spreading in recent weeks has alarmed Berlin.

“Our health system can still cope with this challenge today, but at this speed of infection it will reach the limits of its capacity within weeks,” Mrs Merkel said.

A partial lockdown will now begin in Germany on 2 November, under terms agreed by Mrs Merkel and the 16 state premiers:

The chancellor said the measures were necessary to avoid a national emergency.

The German government is keen to enable families and friends to meet at Christmas, but daily infections have soared to a new high of 14,964, with 85 more deaths reported in the latest 24-hour period.