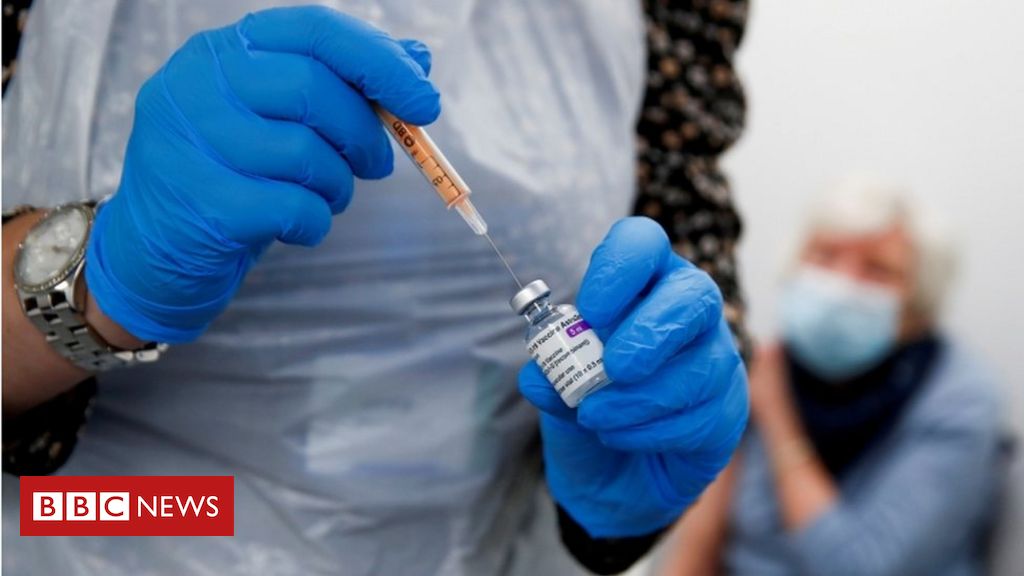 The EU is urging pharmaceutical company AstraZeneca to publish details of the contract they signed for Covid vaccines, amid a row over shortages.

The EU is unhappy with an explanation over production delays, but a confidentiality clause binds it from releasing the deal’s details.

In an interview, the company’s CEO said the contract compelled it to make its “best effort”, rather than obliging it to meet a set deadline.

The two sides are set to meet later.

Earlier on Wednesday, an EU official said that AstraZeneca had pulled out of the meeting, but the company has since insisted it will attend.

Pfizer/BioNTech, which has an even bigger vaccine-production deal with the EU, is also experiencing delays.

French drug maker Sanofi has announced that it will help produce 125 million doses of the Pfizer/BioNTech jab by the end of the year.

The company will allow Germany-based BioNTech to use its facilities in Frankfurt from July, Sanofi said in a statement, having delayed the development of its own vaccine.

Pfizer says its agreement with Sanofi is just one of several efforts it is making to increase supply by expanding manufacturing facilities, and adding suppliers and contract manufacturers to its supply chain.

What are the supply problems?

The EU signed a deal with AstraZeneca in August for 300 million doses, with an option for 100 million more, but the company has reported a production delays at two plants, one in the Netherlands and one in Belgium.

Italy was among the countries threatening to sue over the delays.

The Anglo-Swedish company says it has been able to meet a separate deal with the UK because it was signed three months earlier.

The AstraZeneca vaccine has not yet been approved by the EU, although the European Medicines Agency (EMA) is expected to give it the green light at the end of this month.

The EU had hoped that, as soon as approval was given, delivery would start straight away, with some 80 million doses arriving in the 27 nations by March.

Officials have not confirmed publicly how big the shortfall will be, but Reuters news agency reported that deliveries would be reduced to 31 million – a cut of 60% – in the first quarter of this year.

The EU has also ordered 600 million doses of the Pfizer/BioNTech vaccine, but the company was not able to supply the 12.5 million vaccines it promised the EU by the end of 2020.

Pfizer said last week it was delaying shipments for the next few weeks because of work to increase capacity at its Belgian processing plant.

The EU has threatened to restrict the exports of vaccines made within the bloc to deal with the shortfall.

The head of BioNTech, Uğur Şahin, in an interview with Germany’s Der Spiegel magazine, explained the delay by saying the EU had wrongly assumed that several vaccines would be ready at once and therefore spread its orders. He also said his company was ramping up its manufacturing capacity.

The EU is desperate to boost its stuttering vaccination programme but there is no quick fix. Wednesday’s Sanofi-Pfizer deal doesn’t help in the short term.

Germany is urging Brussels to allow members states to block exports of EU-made jabs – to ensure that the continent gets its “fair share”.

But the EU trade commissioner, Valdis Dombrovskis, suggests it’s better, for now, to ask companies to provide more information about where they were sending jabs – rather than blocking them.

This row with AstraZeneca is over a vaccine that the EU is yet to approve. That is likely to happen at the end of the week, but there are signs it may not be approved for the over 65s because of a perceived lack of efficacy testing within this age group.

The challenge for the EU is to make sure any such decision doesn’t look like retaliation amid this increasingly bitter argument.

Which other vaccines is the EU buying?

The European Commission says it has reached agreements with four other pharmaceutical companies to purchase hundreds of millions of vaccines, once they pass clinical trials:

The Commission also concluded initial talks with another company, Novavax, for up to 200 million doses.

What about the UK?

The UK did not take part in the EU vaccine scheme although it could have done until the end of 2020, while it was still in the Brexit transition period.

At the time, the government said it was opting out because it felt it wouldn’t be allowed to continue its own negotiations with potential suppliers and wouldn’t have a say on the price, volume and date of possible deliveries.

The UK was the first country in the world to approve the Pfizer/BioNTech vaccine (and rolled it out several weeks before the EU).

The UK has also approved the Oxford/AstraZeneca vaccine and the Moderna vaccine.

Have you been affected by vaccine supply issues? Share your experiences by emailing haveyoursay@bbc.co.uk.