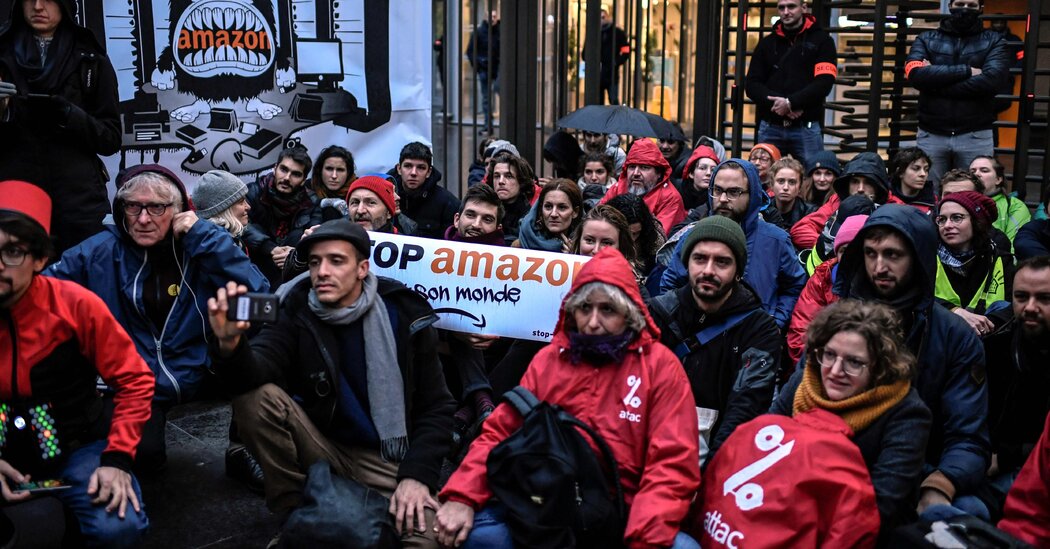 LONDON â€” Those who have tried ending a membership in Amazon Prime, the technology giantâ€™s digital subscription service, may be familiar with the multi-click process: warnings that cancellation will mean losing â€œexclusive benefits,â€ and prompts to reverse course, or switch to an annual membership instead.

Consumer rights groups in Europe and the United States are now urging regulators to take action against Amazon over that Prime design feature, saying it manipulates users into sticking with paid memberships.

A Norwegian consumer rights group on Thursday filed a legal complaint with that countryâ€™s regulators accusing Amazon of engaging in unfair commercial practices with the Prime cancellation design, the latest move in a broader push to make tech companies more accountable to users.

â€œIt should be as easy to end a subscription as it was to subscribe in the first place,â€ said Finn LÃ¼tzow-Holm Myrstad, the director of digital policy for the rights group, the Norwegian Consumer Council. â€œThis practice not only betrays the expectations and trust of consumers but breaches European law.â€

The move was welcomed Thursday by consumer rights advocates in Europe, some of whom said they had filed their own complaints, and in the United States.

Ekpizo, a consumer organization in Greece that said it had lodged complaints with regulators there after hearing from consumers, said the design of the Prime cancellation process was â€œa deliberate effort by Amazon to confuse and mislead its customers.â€

â€œAmazon should treat customers with respect instead of trying to undermine their autonomy and fight their decisions,â€ said Burcu Kilic, director of the groupâ€™s digital rights program.

â€œWe make it easy for customers to leave whenever they choose to,â€ the company said in a statement Thursday, adding that there were several ways to cancel online or with a phone call. Information provided during the cancellation process â€œgives a full view of the benefits and services members are canceling,â€ the company said.

Consumer rights advocates said that the technique employed by Amazon exemplifies the â€œdark patternsâ€ used on websites and apps to encourage people to do things they would not otherwise do. Tech companies like Amazon, they said, held immense sway over consumers.

The techniques can include tacking travel insurance onto flights, encouraging people to accept a legal agreement or signing up for marketing emails, said Harry Brignull, an expert in deceptive online practices who coined the term â€œdark patternsâ€ in 2010. Once designed, the techniques can easily be deployed for all users, he said.

A recent survey of 1,000 people conducted by the Norwegian Consumer Council found that one in four reported difficulties unsubscribing from digital content services.

Techniques used to keep users signed up to Amazon Prime included complicated navigation panels and skewed wording that framed membership cancellations as negative, said Mr. Myrstad of the Norwegian consumer group. â€œTheyâ€™re used to evoke emotions in you. People are afraid of losing something. They play on your fears.â€

Though he called the tactics manipulative, Mr. Brignull said it was unclear whether they were illegal. The new California Privacy Rights Act, for example, specifies that an â€œagreement obtained through use of dark patterns does not constitute consent,â€ but itâ€™s unclear how that might applied.

The effort by the consumer groups comes as tech companies like Amazon, Google, Facebook and Apple are grappling with a barrage of criticism and lawsuits.

In the United States, the Justice Department has accused Google of illegally protecting its monopoly over search, while federal and state regulators have sued Facebook for buying up its rivals to dominate social media. In Europe, lawmakers and regulators are drafting regulations aimed at limiting the four companiesâ€™ power.

Over a dozen consumer rights groups across Europe and the United States have worked together to raise concerns with regulators about major technology companies, said Ursula Pachl, deputy director-general of the European Consumer Organization, an umbrella organization representing groups in 32 countries.

â€œEurope has very good consumer protection law, but it needs to be enforced,â€ said Ms. Pachl, adding that her organization was planning to send a letter to the European Commission raising the concerns of the groups. â€œWhat we need now is the authorities to take the existing tools to apply them to the online market.â€

The effort will build on a previous campaign, waged in 2018 by seven European consumer organizations, that said Google had manipulated users in order to get location tracking information.

Outside of consumer actions, disgruntled everyday consumers had another path available to them â€” complaining loudly, Mr. Brignull said.

â€œMy message to consumers would be to complain about these things publicly,â€ he said, adding that regulators paid attention to feedback on social media and on business review sites. â€œIt gives a massive signal to them.â€

Reporting was contributed by Niki Kitsantonis from Athens, Christopher Schuetze from Berlin, and Aurelien Breeden from Paris.