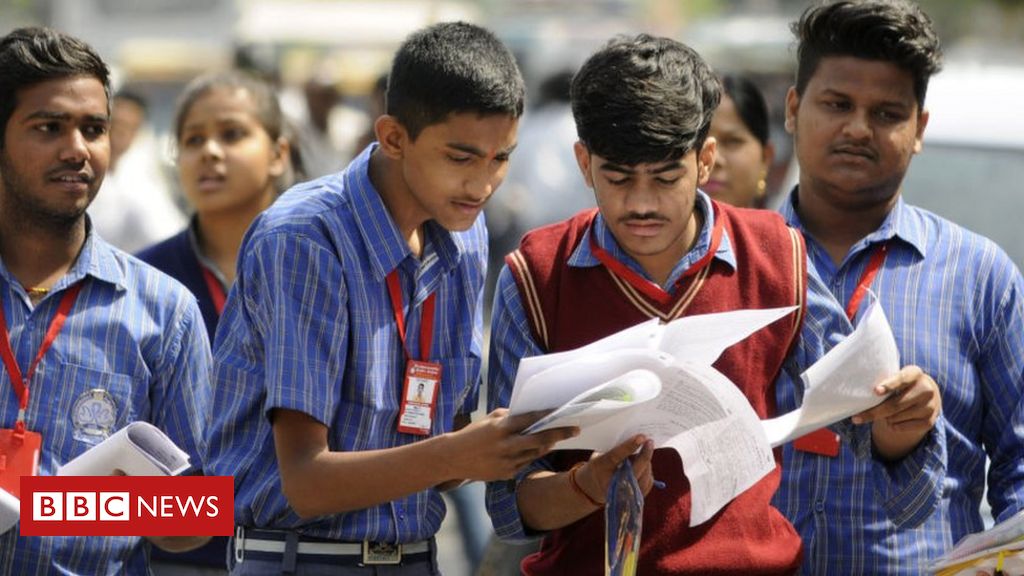 “We were glued to our phones, waiting for the announcement on Twitter,” 18-year-old Vishwas Dubey told the BBC.

He was among millions of students who were due to take the national school-leaving tests.

The examinations – popularly called boards – are crucial for students hoping to secure admission in some of India’s most prestigious public universities.

The exams, originally planned for May, were postponed to July, with the authorities saying they would do a review on 1 June.

The cancellation came as a huge relief to many who were anxious about writing exams at a time when Indian towns and cities were gripped by a deadly second wave of Covid-19 pandemic.

But, students said, this relief soon gave way to anxiety.

“I was cheerful in the beginning but soon I started asking questions about the future and what would happen,” Mr Dubey told me over the phone.

Shubransu Dash, a student from Cuttack city in the eastern state of Odisha (formerly Orissa), described it as a “somewhat bittersweet moment” when he found out that he wouldn’t have to write the tests under such pressure but it also opened up a whole world of uncertainty.

Government of India has decided to cancel the Class XII CBSE Board Exams. After extensive consultations, we have taken a decision that is student-friendly, one that safeguards the health as well as future of our youth. https://t.co/vzl6ahY1O2

“I was studying very hard, logged on to Zoom calls from early morning to late noon. But with exams cancelled, how do we prove ourselves?” he asked.

For the most part, the education system in India is geared towards this one big board exam that Class 12 students have to take. It marks the culmination of their school life and forms the basis for all their future studies.

The cancellation of these tests, students say, complicates matters.

“We don’t know how we are going to be evaluated, how colleges and universities would accept our admission applications,” Mr Dubey said.

In their cancellation order of 1 June, authorities said that students would be marked according to a “well-defined, objective criteria” which would be announced later.

The Central Board of Secondary Education (CBSE), the government-controlled board that conducts these examinations, said experts would look at all angles and decide how students would be evaluated.

Some educationists feel that students could be marked on the basis of their performance in previously-held examinations such as pre-boards – internal school tests conducted before the final boards.

But students say that this is rife with issues.

“It’s unfair as we write the pre-boards to assess ourselves. These are essentially to prepare for the boards. They’re not the real thing,” Mr Dubey said.

Also, he said, writing the pre-boards during the pandemic meant that many were sick or dealing with losses, while some just lost momentum after the tests were postponed the first time and, as a result, many didn’t perform well.

“I lost my grandparents to Covid-19 this year. The emotional trauma was intense,” he told me.

Teachers also say that asking the schools to mark their own students could lead to all sorts of issues.

“Now schools will be in a bit of a quandary,” Mohit Sinha, a teacher at The Doon School, a boarding school in the Himalayan city of Dehradun, told me.

An external exam removes bias as everyone writes the same exam and is graded by a neutral party, whereas schools might be “emotionally invested in their own students” and “instead of giving a student three on five, I might give them four on five”, he explained.

Some schools might also take this opportunity to push up the average grades of students to improve the school’s ranking, he said.

Students appear unhappy with the arrangement. “What happens if I am not happy with the marks assigned to me?” Mr Dash asked. “How will I prove to, say the Delhi University, that I am qualified?”

The CBSE announced that students would be allowed to write an examination if they were not satisfied with their evaluations.

“But that could delay my admissions process and I don’t want to waste a whole year,” Mr Dash contended.

It’s not just the exams, many 12th grade students are also unhappy that they have missed out on the last year of school and time with their friends.

With classes moving online, students spent the year at home, logging into Zoom to study and keeping in touch with classmates.

“Its been a lost year for us. We have stayed home for most of this academic year,” Sanshray Ghorawat, a student from Kolkata told me.

“We couldn’t meet our friends or even have a graduation ceremony. It was very disheartening,” he said.