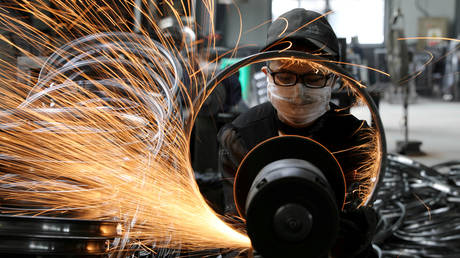 Chinese factory activity has beaten expectations once again, expanding for the fifth straight month and recovering at a faster pace, new data shows.

China’s closely watched manufacturing purchasing managers’ index (PMI) rose to 51.1 in July from 50.9 in June, hitting its highest level since March. This is higher than analysts predicted – those polled by Bloomberg had forecast it to remain at June’s level, while economists polled by Reuters expected it to ease to 50.7.

The PMI is a key gauge of manufacturing activity measured through a survey of factory owners and purchasing managers. Any reading above 50 signals growth in factory output, while a reading below signals contraction. It is the fifth month in a row that the key figure topped the 50 mark.

Also on rt.com
China’s economy roars back to growth after record coronavirus contraction


The official non-manufacturing PMI, also released on Friday, was 54.2 for July, down from 54.4 in June.

While the NBS says that businesses are optimistic about future recovery, analysts warn that further headwinds lie ahead for the country’s factories. They say that pent-up demand is set to wane, while floods in Chinese provinces, considered the worst in decades, may disrupt economic activity.

A resurgence of coronavirus in the country could create another hurdle. Chinese health authorities reported 127 new coronavirus cases on Thursday, up from 105 the previous day. This is the highest daily number since March.

The recovery of the world’s second largest economy comes as some leading nations are reporting sharp contractions. US gross domestic product (GDP) shrank by 32.9 percent in the second quarter, marking the sharpest decline on record. During the same period, Germany’s economy contracted by 10 percent and France’s economy shrank by 13.8 percent.