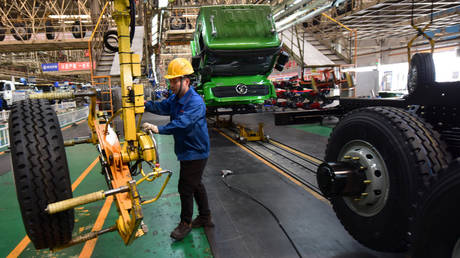 The results of a private business survey reveal that Chinaâ€™s manufacturing sector continues to rebound from the coronavirus pandemic, recording the strongest expansion since January 2011.

The Caixin/Markit manufacturing Purchasing Managersâ€™ Index (PMI), which gives an independent outlook of the countryâ€™s manufacturing sector, ticked up to 52.8 in July from 51.2 in June, with readings above 50 showing growth. The figures, released on Monday, were around 1.3 points higher than analysts polled by Reuters had predicted.

The private survey data is consistent with the official PMI released by Chinaâ€™s National Bureau of Statistics (NBS) last week. According to the agency, the index rose to 51.1 in July from 50.9 in June, hitting its highest level since March.Â

The Caixin manufacturing PMI focuses on smaller and private companies, while the results released by the NBS mostly reflect the performance of larger and state-linked enterprises.

Economists at Caixin Insight Group said that the results reflect the ongoing economic recovery, and that the recent regional flare-ups of the coronavirus infection “did not hurt the improving trend.â€

â€œThe supply and demand sides both improved, with relevant indicators maintaining strong momentum. However, we still need to pay attention to the weakness in both employment and overseas demand,â€ said Wang Zhe, senior economist at Caixin Insight Group.

Weak overseas demand comes as most countries continue to struggle to contain the Covid-19 outbreak. Although the gauge for export orders continued to slump for the seventh consecutive month, the pace of the contraction slowed, according to the analyst.Â

As the worldâ€™s second largest economy suffered from the economic fallout of the pandemic, Beijing rolled out numerous measures to help hard-hit sectors to recover after weeks-long lockdowns. These included tax exemptions, the issuance of special treasury bonds, lower lending rates and increasing the budget fiscal deficit to a record 3.6 per cent of gross domestic product (GDP) this year.

Analysts say that the coronavirus stimulus package helped Chinaâ€™s recovery. The countryâ€™s GDP rose 3.2 percent in the second quarter, making it one of the few countries that managed to avoid technical recession, which is defined as two consecutive quarters of economic contraction.

â€œThe survey data are consistent with our view that policy stimulus has paved the way for a period of above-trend growth in construction and industry,â€ said Julian Evans-Pritchard, senior China economist at Capital Economics, according to media reports. â€œIn the near-term this should help offset continued weakness in consumption and services activity, allowing the economy as a whole to return to its pre-virus trend by year-end.â€