Home Economy China ensures its domination of rare-earths global production & supply as it... 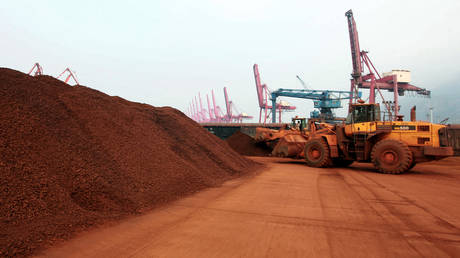 Three rare-earth-producing Chinese companies will be restructured and merged into a single, state-owned giant, with a near-70% share of the domestic production quota for the vital materials, Asia Nikkei reports.

The government is seeking to extend control from production of the metals, essential to manufacturing high-tech products, to the entire supply chain, including exports.

Beijing plans to accelerate the development of resources and processing technology, and to strengthen control over the mining sector. The move also comes as the United States looks to create an alternate supply chain for rare earths, joining forces with Australia.

Also on rt.com
What are rare earth metals & why they are China’s ‘nuclear option’ in trade war with US

A major state-owned resource company China Minmetals Corporation (CMC), major state-owned nonferrous metals company China Aluminum Corporation, and the government of Ganzhou City in Jiangxi Province, which is known for its rare-earth deposits, are “planning a strategic reorganization” of their respective rare-earths subsidiaries. That’s according to the listed subsidiary of CMC.

Secretary-general of the country’s State-Owned Assets Supervision and Administration Commission, Peng Huagang, said this week that the government would “promote the restructuring of rare earths to create a world-class company.”

The new company’s share of the production quota for medium and heavy rare earths in China will be nearly 70%, and nearly 40% of total rare-earths production, including light rare earths.

Dubbed “industrial gold,” rare earths are a group of 17 chemical elements that are used in everything from high-tech consumer electronics to military equipment. Demand for rare earths is currently increasing due to the global growth of electric-vehicle production. They have long been at the center of the US-China trade conflict.

China leads the world’s rare-earth sector in terms of production and refining technologies. According to the US Geological Survey, China accounted for 58% of rare-earths production worldwide in 2020, down from around 90% four years ago as the US and Australia gradually boosted production.