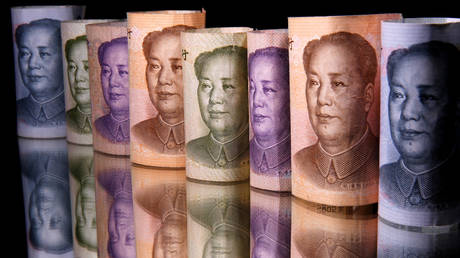 A senior Chinese government adviser said that Beijing aims to use its national currency, the yuan, â€œas much as possibleâ€ in its Belt and Road Initiative (BRI), to try to expand its use as a reserve currency.

According to the former mayor of Chongqing Huang Qifan, the yuanâ€™sÂ share of global payments is limited as it accounted for about two percent of global reserves and 1.76 percent of cross-border payments by the end of June. â€œItâ€™s not commensurate with our countryâ€™s status as the worldâ€™s largest foreign trade country,â€ he said, as quoted by the South China Morning Post.

The country should redouble efforts to increase the currencyâ€™s use in countries that signed up for the massive infrastructure plan, Huang added.Â â€œ[China] should accelerate internationalization of the yuan,â€ he said, explaining that the renminbi should be used as much as possible in pricing, settlement, receipts and payments and reserves.

Huang said Chinaâ€™s new inward-facingÂ â€œdual circulationâ€ strategy,Â which focuses more on the domestic economy and less on exports, could be a chance to spur belt-and-road projects.

Dubbed the 21st century Silk Road project, the BRI was announced by Chinese President Xi Jinping seven years ago. Since then, Beijing has inked around 200 cooperation documents with 167 countries and international organizations.

The multi-trillion-dollar initiative aims to boost connectivity and cooperation between Asia, Europe, Africa, and Latin America. Experts say it will significantly boost global commerce, cutting trading costs by half for the countries involved.

Donald Kendall, Pepsiâ€™s Chief During the Cola Wars, Dies at 99