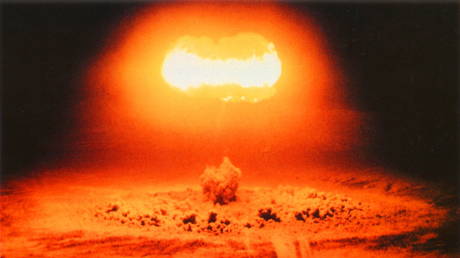 Max Keiser and Stacy Herbert have compared the global monetary system to the â€œinsane nuclear technologyâ€ of the past, saying it could easily explode if some central banks continue to push forward with quantitative easing.

What we’re seeing from US Federal Open Market Committee, the European Central Bank and the Bank of Japan, resembles a â€œsuicide mission,â€ Stacy said in the latest episode of Keiser Report.

â€œBank of Japan, by the way, is leading the way of this whole kamikaze technique,â€ she noted, adding that Tokyo is far ahead of the others on quantitative easing and expanding their balance sheet.

Thus, the heads of the US, European and Japanese monetary watchdogs have â€œstrapped down the suicide quantitative easing vest and theyâ€™ve pulled the ripcord and lit the fuse,â€ according to former Wall Street stockbroker Max Keiser. The â€œfalloutâ€ from those actions is the recent rise in the price of gold, which lately has hit new all-time highs.