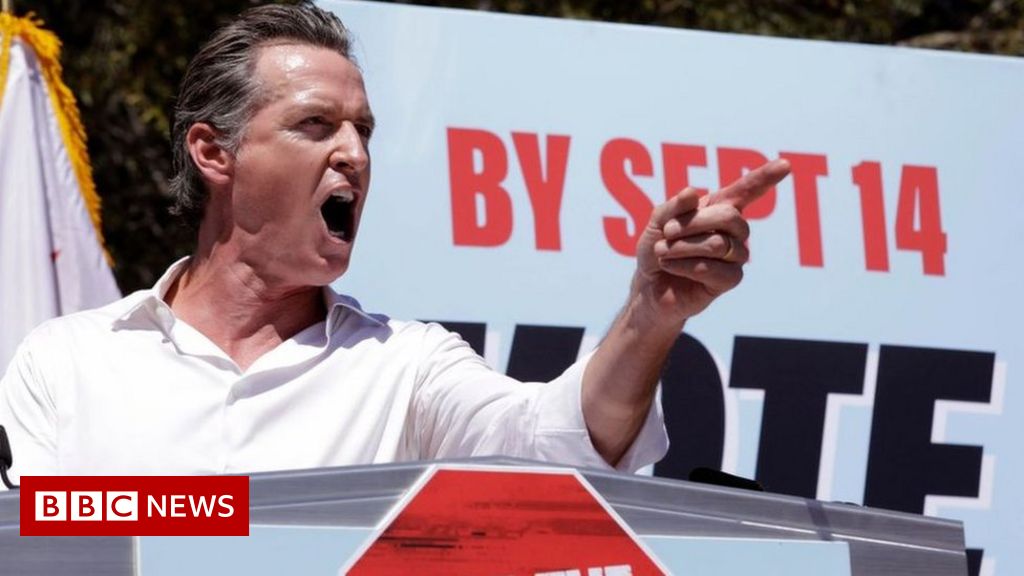 California’s Democrat Governor, Gavin Newsom, appears to have got enough votes to defeat a move to replace him as leader of the state.

His handling of the pandemic had been criticised, which fuelled a long Republican-led effort to remove him as governor.

BBC News looks at some of the claims that were made by Governor Newsom and his challengers during the campaign.

Gavin Newsom: ‘We have among the lowest positivity rates in America… We have one of the lowest case rates.’

Governor Newsom was comparing California’s Covid record with those of states with Republican governors.

In contrast to California, he said in late August, Texas, Florida and Mississippi had some of the country’s highest case and test-positivity rates in the US.

The positivity rate shows the proportion of Covid tests that come back positive.

In California, the latest seven-day average proportion of Covid tests that came back positive is 2.9% – the third lowest reported of all US states, according to Johns Hopkins University.

Meanwhile, Texas and Mississippi have test-positivity rates of 15-20% and Florida 10-15%, the latest data from the US Centers for Disease Control shows.

Over the course of the pandemic, California has recorded more Covid cases than any other state.

But it also has the largest population in the US. And 34 of the 49 other states, including Florida, Texas and Mississippi, have higher per-capita case rates.

Those with lower rates, however, do include states with Republican governors, such as West Virginia and Maryland.

Gavin Newsom: Voting to recall me ‘elects an anti-vax Republican’

On 30 August, Governor Newsom released a campaign advert saying voting to recall him would help elect an “anti-vax” Republican governor.

But all of his Republican challengers have been vaccinated.

“I’ve been vaccinated because of my age, because of a blood condition I have, and my doctor strongly advised me to become vaccinated.”

Mr Elder has said he does not believe children need to be vaccinated.

And all the Republican challengers have said they would roll back vaccine mandates put in place by Governor Newsom for state, school and healthcare workers.

Larry Elder: ‘We have rising crime’

Launching his campaign in July, Mr Elder said crime in California was rising under Governor Newsom – a claim his challengers have reinforced throughout the race.

Certain crimes have increased significantly since Governor Newsom took office, in January 2019. But this is a trend seen in many other parts of the country too.

The following year, the rate rose 31% – while across the country there were 25% more murders – although other offences such as property crime fell by 7.7%.

Overall, violent crime – including murder, robbery, aggravated assault and rape – rose by 0.8% in California in 2020, compared with 2019.

But it remains far below its 1990s peak.

And it rose about 3% across the US as a whole.

Before the pandemic, California’s violent crime rate ranked 12th nationwide and was higher than the national average.

Larry Elder: ‘People are leaving California for the first time in our state’s 170-year history’

Mr Elder made this claim on 5 September, saying under Governor Newsom, for the first time, fewer people were coming to live in California than moving away.

This did happen in 2019 and 2020 under Governor Newsom, according to the Public Policy Institute of California, but it was also the case in 2018 under the previous governor.

The state’s population growth has been slowing for 20 years.

Natural population increase – which represents births minus deaths – has been slowing for many years and took a sharp downturn during the pandemic.