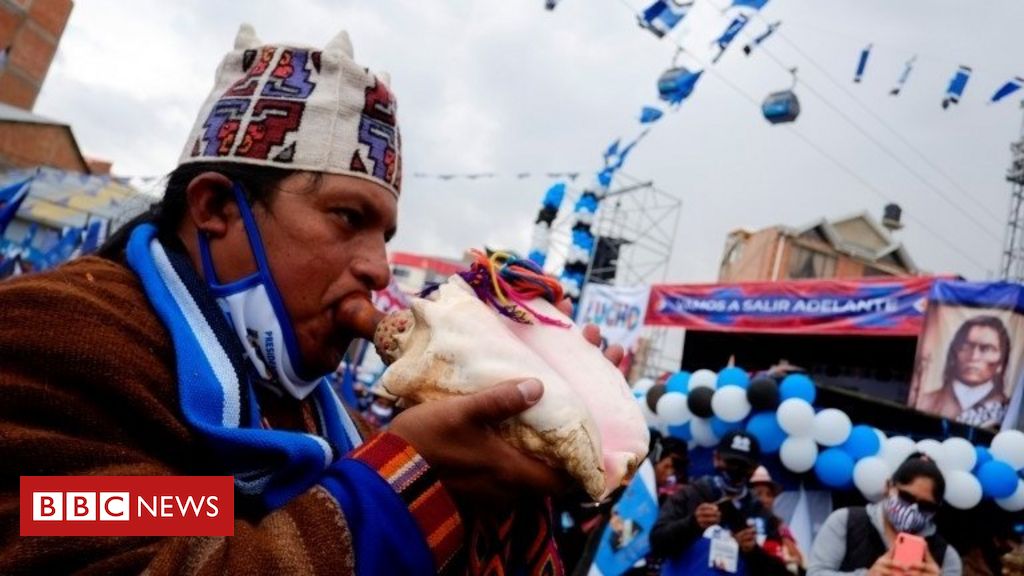 Bolivians go to the polls on Sunday in a tensely awaited presidential election, held in the midst of the Covid-19 pandemic.

The vote is a re-run of a chaotic October 2019 election that led to the resignation and exile of left-wing president Evo Morales. As Bolivia’s first indigenous leader, he had governed the landlocked gas- and mineral-rich South American nation since 2006.

The vote could open the way for the return from exile of Mr Morales, who alleges he was forced out by a right-wing “coup”. The ex-president is not a candidate but his Movement Towards Socialism (Mas) party’s presidential pick, Luis Arce, has been the consistent favourite in opinion polls.

Second in the polls has been former President Carlos Mesa, the centrist candidate of the Citizens’ Community alliance.

Bolivians will be choosing a president, vice-president and 166 members of Congress.

If on 18 October no candidate succeeds in obtaining more than 50% of the votes or 40% with a 10-point lead over the nearest challenger, a run-off between the top two contenders will be held on 29 November.

Here are five things you need to know about the Bolivian election:

The re-run election has been postponed twice due to coronavirus. When conservative Senator Jeanine Áñez took over as interim president on 12 November 2019, just days after Mr Morales publicly announced his resignation, she said her task would be to lead the country to a re-run of the October 2019 elections. This vote, in which Mr Morales sought a controversial fourth term, had ended in chaos, conflict and allegations of fraud.

Electoral authorities set the fresh elections for 3 May 2020 but with Bolivia gripped by the Covid-19 emergency, they were postponed until 6 September, and then put back again until 18 October.

Mr Morales’ Mas party and other critics of the right-wing interim government of Ms Áñez have accused it of using the pandemic to try to hold on to power. They say the Áñez administration has focused more on trying to persecute political opponents, especially the exiled Mr Morales, his Mas party and his indigenous supporters, than on working to ensure fair elections and a smooth transition of power.

Under the Áñez administration, Mr Morales, who has sought refuge in Argentina, was barred by electoral authorities from standing as a senator, and he has also been formally charged with “sedition” and “terrorism”.

2. No Morales on the ballot

This will be the first presidential election since 2002 in which Mr Morales is not on the ballot.

Evo Morales, 60, has been leading the Mas party’s campaign from exile in Argentina, supporting Mr Arce, and making his voice and opinions heard through media interviews and social media. He has portrayed the Áñez government as a right-wing “dictatorship”.

The former leader of the coca growers’ union still commands considerable support in Bolivia among its indigenous population and unions.

Mr Morales said in late September that, if Mr Arce won, he would return to the country “the next day”.

A Mas victory, and Mr Morales’ return to Bolivia, would be welcomed by old allies in the region such as the left-wing presidents of Cuba, Venezuela and Nicaragua.

However, it would be dimly viewed by US President Donald Trump’s administration and its allies in Latin America – Mr Morales has been a fierce and life-long critic of US “imperialism”, even though he was credited with applying pragmatic economic policies during his nearly 14 years in office.

3. Morales’ party in the lead

Mr Arce is Mr Morales’ former finance minister. The 57-year-old has consistently led opinion polls since his candidacy was announced, with some counts showing him nearly 10 points ahead.

With more than one anti-Mas candidate running, the vote against a possible Mas victory and return of Mr Morales has been fractured.

With the anti-MAS field thinning out somewhat, a deciding November run-off between Luis Arce and Carlos Mesa is a possibility.

4. Why the interim president bowed out

Ms Áñez, 53, initially surprised many Bolivians, including members of her own government, when she announced in January 2020 that she would stand as a candidate in the re-run vote. Critics accused her of political ambition, saying this compromised her previous pledge to lead the country to fair elections.

However, on 17 September, Ms Áñez announced that she was dropping out of the presidential race to avoid a “dispersion of the vote” between candidates opposed to Mr Arce.

On 11 October, another anti-Mas candidate, ex-president Jorge “Tuto” Quiroga, of the Free 21 party, also announced he was pulling out of the race, and there were reports that the Nationalist Democratic Action (ADN) party might do the same to improve the chances of defeating Mr Arce.

However, right-wing candidate Fernando Camacho of the anti-Mas We Believe party, who has been running third in opinion polls, remained in the race, keeping alive the concerns among opponents of Mr Arce about whether they could present a wide, unified front to win.

5. Risk of political confrontation and violence

Tension and expectation ahead of the vote have been building up for months and international organisations, including the Catholic Church, the European Union and the United Nations, have called on all sides to avoid confrontation.

The interim government has cited “intelligence information” to allege that Mas and allied groups are preparing violent acts if Mr Arce does not win, and it said the armed forces were “ready” to face any eventuality.

Andrónico Rodríguez, coca growers’ leader in Cochabamba and a Mas supporter, has warned that if Mas loses, the party will encourage “mobilisations”.

The UN has registered 46 incidents of violence during the campaign.