Home World USA Blinken Is Grilled on Afghanistan in Congress 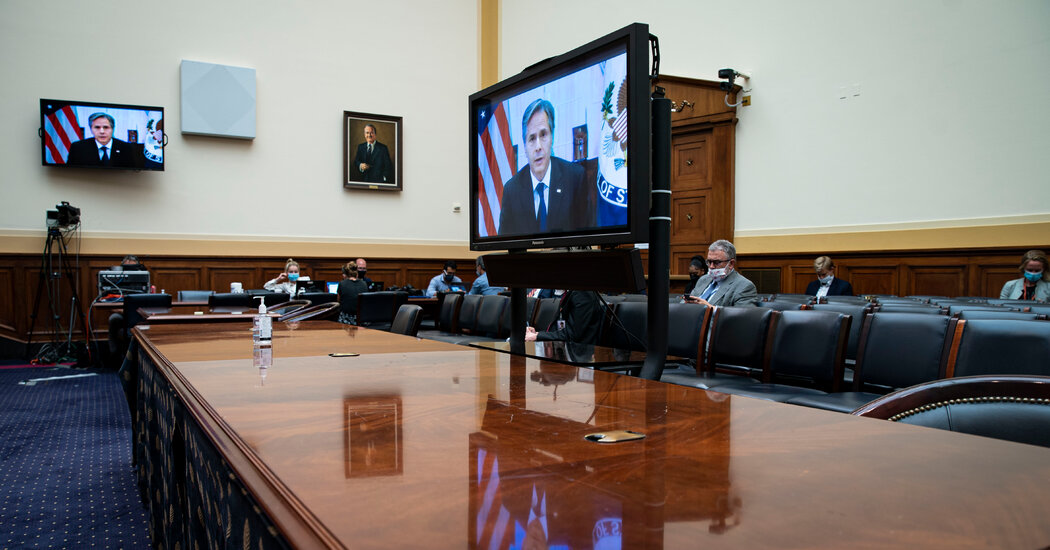 WASHINGTON — Secretary of State Antony J. Blinken said on Monday that there was no way to predict how quickly Afghanistan would fall to the Taliban and no evidence that extending the U.S. troop presence could have stabilized the country, in a resolute defense of the American withdrawal last month.

In more than five hours of testimony to the House Foreign Affairs Committee, Mr. Blinken faced at least two calls for his resignation, as well as a string of demands from critics who accused the Biden administration of badly mishandling the end of the 20-year war. Even Democrats noted the desperation of Afghans who had allied with the United States but were not evacuated and wondered how they would survive under Taliban rule.

“Make no mistake, Mr. Secretary — the Biden administration’s egregiously inept withdrawal has left America and the world a much less safe place,” said Representative Ann Wagner, Republican of Missouri. “Do you take any responsibility, Secretary Blinken, for this disastrous withdrawal, or do you still want to call it a success?”

Mr. Blinken, his voice straining, said he accepted responsibility for his decisions — including to evacuate nearly 125,000 people from the airport in Kabul over a two-week period, and to pressure the new Taliban government to respect Afghans’ rights.

His measured defiance did not, however, satisfy lawmakers who questioned how the Biden administration failed to understand how quickly Afghanistan would deteriorate as the U.S. military prepared to leave.

An early intelligence assessment predicted that Afghan security forces would be able to repel the Taliban well into 2022, Mr. Blinken said, a forecast that was shortened in July to the end of 2021. “Even the most pessimistic assessments did not predict that government forces in Kabul would collapse while U.S. forces remained,” he said.

Additionally, he said, “there’s no evidence that staying longer would have made the Afghan security forces or the Afghan government any more resilient or self-sustaining.”

Mr. Blinken also could not clarify with precision how many American citizens and residents, or Afghans at high risk of Taliban retribution, remain dependent on U.S. help to escape. He described that as a mission without a deadline, and noted that more than 50 American citizens and legal residents have left Afghanistan over the last several days. More than 6,000 exited before the U.S. military departed on Aug. 30.

By the end of September, he said, about 60,000 Afghans who worked for the American government over the course of the war will have been admitted to the United States — a high priority for their U.S. military partners, who are struggling to evacuate tens of thousands more.

He acknowledged disjointed coordination across the American government in trying to pull off one of the largest airlifts in history, including the unexpected evacuation of the U.S. Embassy in Kabul. “It definitely improved, but it did not start from a great place,” Mr. Blinken said.

Democrats on the House panel repeatedly raised the fact that the withdrawal was negotiated by the Trump administration, seeking to shift some blame for its chaos away from President Biden.

“We inherited a deadline,” Mr. Blinken said, adding that the Taliban would have attacked U.S. forces had they stayed. “We did not inherit a plan.”

“It’s amazing that it was not much, much worse,” responded Representative Brad Sherman, Democrat of California.

Mr. Blinken said that the Biden administration would not abandon Afghans, noting continued diplomatic efforts from Doha, the capital of Qatar, and nearly $64 million in humanitarian aid that the U.S. Agency for International Development announced on Monday for relief agencies working in Afghanistan.

He said the Biden administration was focused on minimizing security threats — both through so-called over-the-horizon strikes to keep terrorists from gaining ground in Afghanistan and in vetting even longtime Afghan allies before they are allowed into the United States.

The Taliban has agreed to refuse refuge to terrorist groups as a condition of the U.S. military withdrawal, which the Trump administration brokered in February 2020. But it is widely believed that Al Qaeda’s most senior leader, Ayman al-Zawahri, is living in Afghanistan, and top C.I.A. officials, including William J. Burns, the agency’s director, have acknowledged that their ability to gather information on terrorist activity there is now diminished.

Ahead of Mr. Blinken’s testimony, the Biden administration’s top intelligence official said Afghanistan was not the most pressing terrorism threat for the United States, even after the Taliban’s takeover. Avril D. Haines, the director of national intelligence, said the withdrawal of American troops and the collapse of the U.S.-backed government have created challenges for collecting intelligence in the country.

But, she said, “in terms of the homeland, the threat right now from terrorist groups, we don’t prioritize at the top of the list Afghanistan.”

Who are the Taliban? The Taliban arose in 1994 amid the turmoil that came after the withdrawal of Soviet forces from Afghanistan in 1989. They used brutal public punishments, including floggings, amputations and mass executions, to enforce their rules. Here’s more on their origin story and their record as rulers.

Who are the Taliban leaders? These are the top leaders of the Taliban, men who have spent years on the run, in hiding, in jail and dodging American drones. Little is known about them or how they plan to govern, including whether they will be as tolerant as they claim to be. One spokesman told The Times that the group wanted to forget its past, but that there would be some restrictions.

Her comments underscored a tenet of Mr. Biden’s decision to leave: that the enduring conflict in Afghanistan had become a distraction from more immediate threats to the United States, like China, Russia, climate change and the coronavirus.

Given that strategy, the overall decision to withdraw from Afghanistan “made good sense,” said James F. Jeffrey, a former ambassador who worked closely with Mr. Blinken and other senior officials during the Obama administration and is now chair of the Middle East Program at the Wilson Center, a think tank in Washington.

But, Mr. Jeffrey said, “the preparations for this thing, and the failure of imagination on how fast it would happen and how complete the collapse — that’s a problem that you have to point to the administration on.”

The diplomatic effort that Mr. Blinken vowed would continue largely focuses on pressuring the Taliban to ensure safe passage for people who want to leave Afghanistan, and to protect Afghan women and girls who were denied educations and jobs, and in worst cases, brutalized, when the Taliban last ruled, from l996 to 2001. On Monday, he acknowledged that the Taliban had fallen “very short of the mark” in creating a government that includes women or ethnic minorities, as many countries have demanded.

“I know there have been night letters that have been posted on doors marking people for interrogation or assassination,” said Representative Abigail Spanberger, Democrat of Virginia. She added that “murders and beatings have been documented against those who have helped the United States.”

Mr. Blinken agreed that such episodes “are deeply, deeply disturbing” and suggested that the Biden administration was preparing consequences for the Taliban should their leaders renege on their assurances. They are expected to include economic sanctions against the government, and an end to Taliban hopes for international funding and legitimacy.

Officials had expected Mr. Blinken to face a vitriolic hearing, and Republicans who questioned him from the House dais or through a teleconference lens berated him as having lost credibility or not being forthcoming.

At one point, Representative Steve Chabot, Republican of Ohio, questioned whether the withdrawal marked “the worst foreign affairs disaster in American history.” At another, Representative Joe Wilson, Republican of South Carolina — who famously shouted, “You lie!” as President Barack Obama addressed Congress in 2009 — hammered Mr. Blinken for the steps that led to the Taliban’s takeover. “You should resign,” Mr. Wilson said.

Mr. Blinken will appear before the Senate Foreign Relations Committee on Tuesday. Hours later, Gen. Austin S. Miller, the former commander of U.S. forces in Afghanistan, is set to testify to the Senate Armed Services Committee, but in a closed-door session.

The House committee’s chairman, Representative Gregory W. Meeks, Democrat of New York, said ending the war in Afghanistan was “never going to be easy for my friends who presume a clean solution for the withdrawal existed.”

But he suggested that the Trump administration bore responsibility for the deal that outlined the withdrawal and that the current outcry carried a partisan tinge: “Once again, you’re seeing domestic politics injected into foreign policy,” Mr. Meeks said.