Home Economy Bitcoin's plunge below $29,000 wipes out ALL of this year's gains 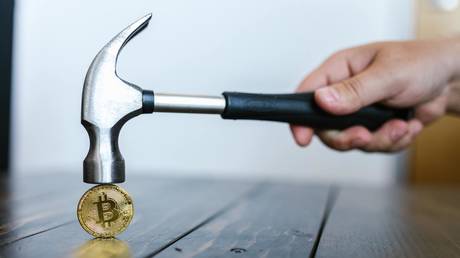 The world’s top digital asset, bitcoin, has suffered a daily plunge of over 11%, dragging the cryptocurrency down to its lowest level this year – $28,993 as of 13:54 GMT on Tuesday, according to data tracked by CoinMarketCap.

The plunge comes a day after the People’s Bank of China, in a further extension of its nationwide crackdown on cryptocurrencies, summoned banks and payment companies and ordered them to stop facilitating crypto transactions.

Bitcoin has lost over half its value since peaking above $64,000 in mid-April.

Also on rt.com
Bitcoin plummets as China steps up crackdown on crypto miners

According to technical analysts, the next level to watch for support could now be as low as $20,000.

“$30,000 – we’ll see if it holds on the day. We might plunge below it for a while and close above it. If it’s really breached, $25,000 is the next big level of support,” Galaxy Investment Partners CEO Mike Novogratz told CNBC.