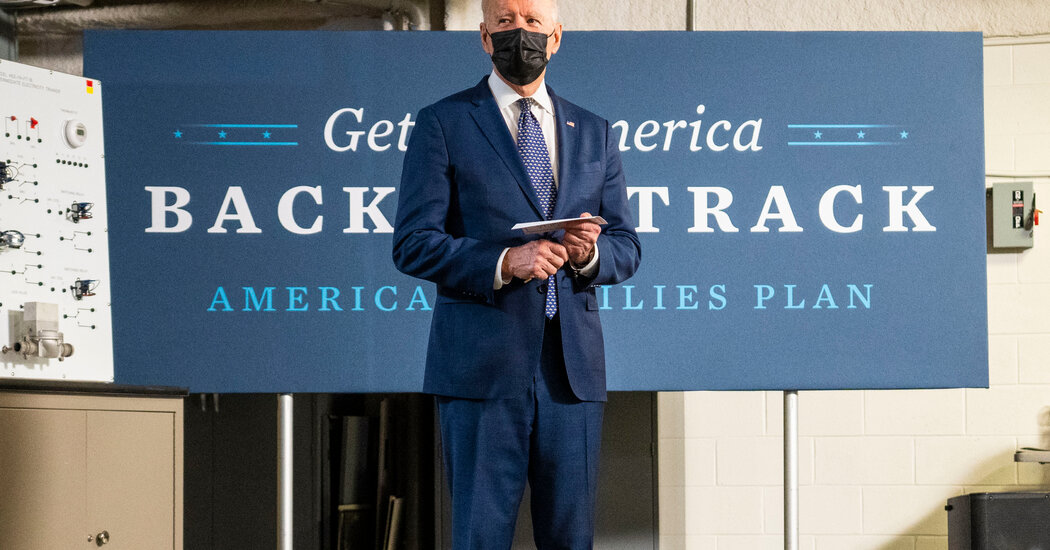 Business lobbyists and conservative think tanks are not big fans of President Bidenâ€™s proposed tax increases on the wealthy.

The Tax Foundation has said that Biden wants to raise the capital gains tax to â€œhighs not seen since the 1920s.â€ Suzanne Clark of the U.S. Chamber of Commerce called the same plan â€œoutrageous.â€ Jay Timmons of the National Association of Manufacturers called the proposed increase in the corporate tax rate â€œarchaic.â€ And Brendan Bechtel, the chief executive of the construction company that bears his family name, said that â€œit doesnâ€™t feel fair.â€

All of this rhetoric has obscured a basic fact about Bidenâ€™s tax plan: It would not actually raise tax rates on the rich to high levels, historically speaking.

If all of Bidenâ€™s proposed tax increases passed â€” on the corporate tax, as well as on investment taxes and income taxes for top earners â€” the total federal tax rate on the wealthy would remain significantly lower than it was in the 1940s, â€™50s and â€™60s. It would also remain somewhat lower than during the mid-1990s, based on an analysis that Gabriel Zucman of the University of California, Berkeley, did for The Morning.

The data is a reminder of just how far taxes on the wealthy have fallen over the past 70 years. In the decades just after World War II, many corporations paid about half of their profits in federal taxes. (Shareholders, who are disproportionately affluent, effectively pay those taxes). Today, corporate taxes are only about one-fourth as large, as a share of G.D.P., as they were in the 1950s and â€™60s.

The declines are not all ancient history, either. For most of the past quarter-century, taxes on the affluent have continued falling, including the rates on corporate profits, personal income, stock dividends, stock holdings and inheritances. Barack Obama reversed some of the declines, but only some. â€œThe net effect over the past 25 years of federal income tax policy has been to reduce the overall revenue collected from top earners,â€ Owen Zidar, a Princeton University economist, told me.

Whether you like Bidenâ€™s plan or dislike it, it is not radical. For that reason, it is highly unlikely to have the harmful effects on economic growth that its critics are claiming. Remember: In the 1990s, the last time tax rates were as high as the ones Biden has proposed, the economy boomed. It also grew rapidly after World War II, when tax rates were higher yet.

History suggests that tax rates on the wealthy are not the main determinant of economic growth (and, if anything, higher taxes on the rich can sometimes lift growth). The main effect of Bidenâ€™s tax plan probably wonâ€™t be on the level of G.D.P. It will instead be on the relative tax burden that wealthy people pay. When they criticize the plan as unfair, archaic and outrageous, they are really saying that they enjoy paying low tax rates.

When the World Trade Organization meets this week, should it waive Covid vaccine patents to increase access for poorer countries?

A Times classic: Can you guess whether these neighborhoods voted for Biden or for Trump?

Lives Lived: He was born Joseph Jacques Ahearn, but his mother thought Jacques dâ€™Amboise would be better suited to the ballet world. After he became a dancer, dâ€™Amboise found stardom in New York and Hollywood. He died at 86.

The incredible making of â€˜All the Girlsâ€™

By the time last year that producers were ready to record a new album by the soprano Rebecca Luker, she was too sick to sing. A.L.S. had robbed her of her strength.

But the producers did not give up.

They created what Tommy Krasker, the head of Lukerâ€™s label, called â€œthe first studio album made without ever stepping in the studio.â€ They used recordings of one of Lukerâ€™s final performances â€” and the rehearsals for it â€” while musicians recorded material at home during lockdown. The producers mixed the sounds, â€œand by some miracle what emerged sounded pristine,â€ the critic Jesse Green writes in The Times.

The album, â€œAll the Girls,â€ also featuring the soprano Sally Wilfert, came out two days after Lukerâ€™s death in December. Green calls it beautiful and funny. (It includes this song, which is worth watching.)

Tonight, Lukerâ€™s colleagues and friends will tell stories and sing songs from her career at a fund-raising concert you can stream. â€” Claire Moses, Morning writer