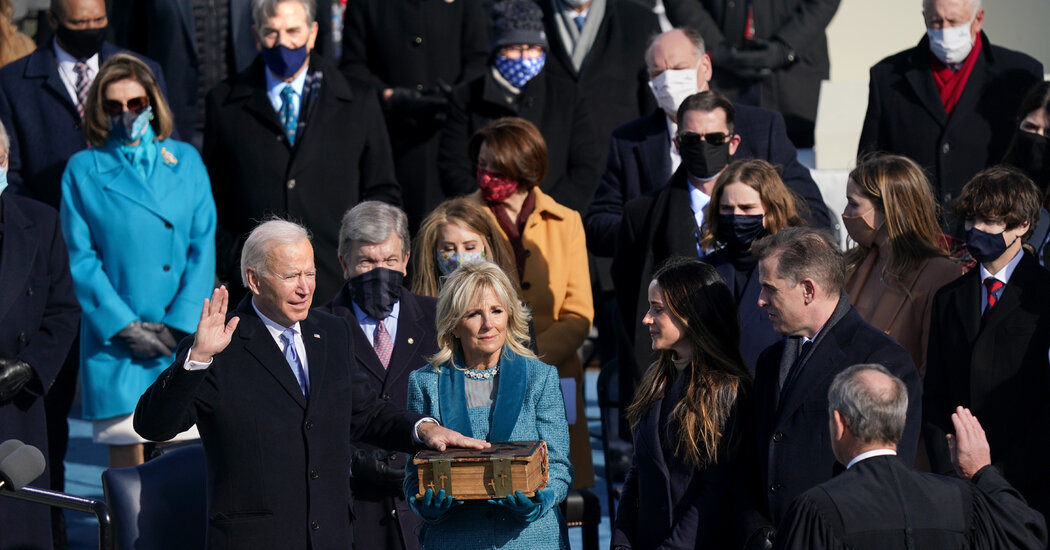 Want to get The Morning by email? Hereâ€™s the sign-up.

Good morning. The Biden administration begins to address the six crises that the new president described in his inaugural address.

Near the end of his inaugural address yesterday, President Biden named six crises that the U.S. faces: the virus, climate change, growing inequality, racism, Americaâ€™s global standing and an attack on truth and democracy.

â€œAny one of these will be enough to challenge us in profound ways. But the fact is, we face them all at once,â€ Biden said. â€œWe will be judged â€” you and I â€” by how we resolve these cascading crises of our era.â€

To get started, Biden announced a longer list of Day 1 executive actions â€” 17, in all â€” than any previous modern president, as The Timesâ€™s Michael Shear points out. The Biden administration is also asking for legislation by Congress. But hereâ€™s our explanation of how the new president is trying to make immediate progress:

Biden signed an executive order yesterday requiring masks where he has the authority to do so â€” in federal buildings, for example â€” as well as a separate order creating a White House position to improve the governmentâ€™s response to the virus.

He also made clear that he was ending the Trump administrationâ€™s hostility to global cooperation by halting the U.S. withdrawal from the World Health Organization. Biden is sending Dr. Anthony Fauci to the groupâ€™s meeting today as the head of the U.S. delegation. â€œItâ€™s an interconnected world,â€ my colleague Apoorva Mandavilli says. To succeed in combating the virus, â€œwe have to coordinate with other countries.â€

Biden is also asking Americans to wear masks for the next 100 days. One question he hasnâ€™t yet answered: How will he persuade more Republican voters â€” many of whom are skeptical of masks â€” to wear them?

Biden signed two executive orders on climate â€” one that recommits the U.S. to the Paris climate agreement and another that reverses Donald Trumpâ€™s hostility to environmental regulations. â€œNo president has brought in this many people at the start of an administration to work on climate change,â€ Lisa Friedman, who covers climate policy, said.

Still, these actions are only first steps, Nathaniel Keohane of the Environmental Defense Fund told me. Reversing Trumpâ€™s actions is significant, he added â€” but the world needs more ambitious steps to curb the use of greenhouse gases that are causing so much damage.

Bidenâ€™s biggest attempts to reduce economic and racial inequality will require congressional legislation. But he took some early steps yesterday.

He has extended moratoriums on evictions and student-loan payments that the Trump administration had put in place. He also ordered federal agencies to root out racially unequal policies. â€œWe have great evidence from economists that tearing down barriers to advancement for men of color and women of all races fueled huge amounts of growth in the United States in decades past,â€ The Timesâ€™s Jim Tankersley said.

Biden also sought to undo several of Trumpâ€™s anti-immigration policies. Among the moves: refocusing deportation efforts on those undocumented immigrants who have committed crimes in the U.S. â€œTrump, on the other hand, decided that anyone in the country illegally should be arrested and deported,â€ Miriam Jordan, who covers immigration for The Times, said.

Democracy, truth and Americaâ€™s role in the world

In his address, Biden repeatedly stressed the importance of truth and included a veiled but obvious reference to Trump by criticizing â€œlies told for power and for profit.â€ And at her first White House briefing last night, Jen Psaki, Bidenâ€™s press secretary, said: â€œThere will be moments when we disagree â€¦ but we have a common goal, which is sharing accurate information with the American people.â€

Biden signaled his emphasis on diplomacy by embracing the Paris climate accord and World Health Organization. Another big move to improve the U.S. image around the world was his immediate repeal of a signature Trump policy: the so-called Muslim travel ban. It had restricted nearly all passport holders from several Muslim-majority countries â€” including Iran, Libya, Somalia, Syria and Yemen â€” from entering the U.S.

MORE ON THE INAUGURATION

Reviews of the Speech

A Morning Read: An ode to Gottliebâ€™s Bakery, whose Georgia-made rye bread rivaled any deli in New York City for those who grew up with it.

From Opinion: Access to the coronavirus vaccines has been unfair and inequitable. But if youâ€™re offered one, you should take it â€” no matter how undeserving you may feel, Melinda Wenner Moyer writes.

Lives Lived: Margo St. James was one of the nationâ€™s most prominent advocates for sex workers, devoting her life to decriminalizing prostitution and destigmatizing its practitioners. She called her organization COYOTE (for Call Off Your Old Tired Ethics). She died at 83.

What to Listen to

The 20-year-old British singer-songwriter Arlo Parks talks about making music that strikes the perfect balance of happy and sad.

The pangram from yesterdayâ€™s Spelling Bee was multiply. Todayâ€™s puzzle is above â€” or you can play online if you have a Games subscription.

Thanks for spending part of your morning with The Times. See you tomorrow. â€” David

P.S. A hidden haiku in Abraham Lincolnâ€™s 1861 inaugural address, recently spotted by @nythaikus: â€œThough passion may have / strained it must not break our / bonds of affection.â€ And one from Bidenâ€™s: â€œWe can join forces / stop the shouting and lower / the temperature.â€

Todayâ€™s episode of â€œThe Dailyâ€ is about the inauguration. On the latest â€œSway,â€ Isabel Wilkerson discusses Americaâ€™s caste system.

Claire Moses, Ian Prasad Philbrick, Tom Wright-Piersanti and Sanam Yar contributed to The Morning. You can reach the team at themorning@nytimes.com.

Sign up here to get this newsletter in your inbox.