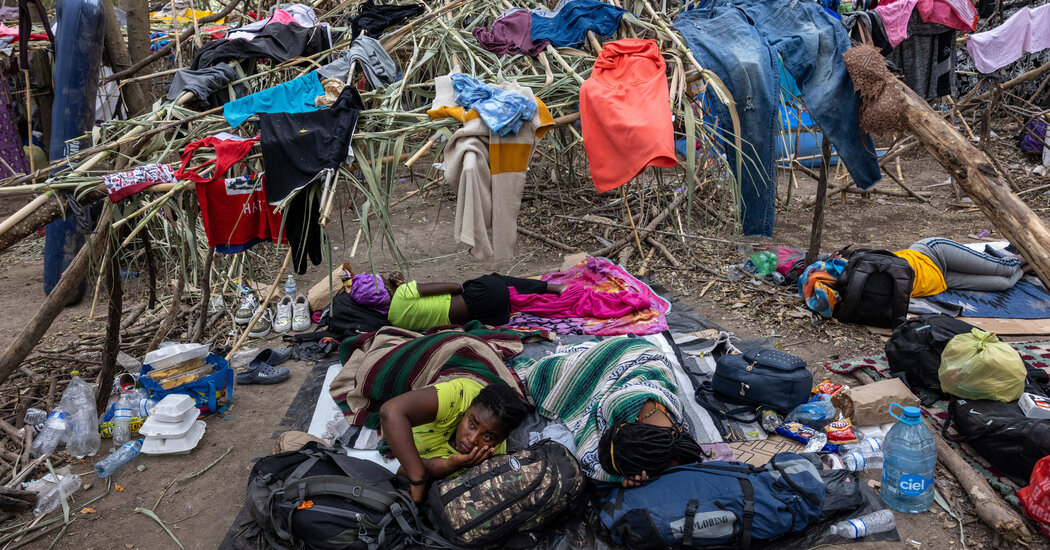 In fact, the aggressive effort to quickly clear a makeshift camp in Del Rio, Texas, of more than 15,000 Haitian migrants was part of a Biden administration response that included â€œsurgingâ€ agents to the overrun area using a public health immigration rule invoked by Mr. Trump to send many people home.

President Bidenâ€™s spokeswoman said the scenes of agents on horseback were â€œhorrificâ€ and not â€œacceptable or appropriate.â€ Vice President Kamala Harris said â€œhuman beings should never be treated that way.â€ The Department of Homeland Security said it was investigating.

Still, the deportations are a stark example of how Mr. Biden â€” who declared on Feb. 2 that his goal was to â€œundo the moral and national shame of the previous administrationâ€ â€” is deploying some of the most aggressive approaches to immigration put in place by Mr. Trump over the past four years.

Having failed in his attempts to build a more â€œhumaneâ€ set of immigration laws, Mr. Biden has reacted in a way that few of his supporters expected. In case after case, he has shown a willingness to use tough measures.

Part of the dilemma Mr. Biden faces is that his efforts to use the power of his office to enact lasting immigration change have been blocked by federal judges skeptical of executive power and slowed by a bureaucracy purposely hobbled by the former president. His proposal for a comprehensive overhaul of immigration laws is going nowhere in Congress, and his hopes to grant millions of undocumented immigrants a path to citizenship was dealt a serious setback in the Senate on Sunday.

Mr. Biden is struggling to confront a challenge that has vexed presidents for decades: securing the borders while living up to U.S. humanitarian obligations to migrants fleeing economic hardship, political instability and violence.

The approach has prompted fierce debate in the administration, where some of his top aides favor stronger policies that would deter people from trying to cross the border, while others advocate a more welcoming stance.

The hard line has infuriated immigration advocates, who have lashed out at the president for expelling the Haitians.

But their frustration with Mr. Biden runs deeper than the current situation. Many said they had begun to doubt whether he had the will or the desire to make good on any of his immigration promises.

â€œThe question thatâ€™s being asked now is: How are you actually different than Trump?â€ said Marisa Franco, the executive director of Mijente, a Latino civil rights organization, who consulted the Biden campaign as a representative for Senator Bernie Sanders of Vermont. â€œYou campaigned that immigration was one of the places where Trump was inhumane and failed. And last time I checked, Trump is not the president.â€

Biden administration officials bristle at that suggestion, saying the president moved within hours of taking office to undo many of Mr. Trumpâ€™s anti-immigrant policies. And they say advisers are united behind a strategy that includes building a new, robust asylum system while also cracking down on illegal immigration.

Jen Psaki, the White House press secretary, on Wednesday reiterated Mr. Bidenâ€™s hopes for an immigration system that is more open to those seeking refuge, even as she acknowledged the administrationâ€™s determination to keep the border secure.

â€œThe president remains committed to putting in place a humane and orderly immigration system that includes an established and efficient process for applying for asylum,â€ she told reporters.

Mr. Bidenâ€™s allies blame Republicans for standing in the way of needed changes because they view the border chaos on his watch as a good political issue.

â€œRepublicans have figured this out, right?â€ said Cecilia MuÃ±oz, the director of former President Barack Obamaâ€™s Domestic Policy Council and his top immigration adviser. â€œAs long as you can keep a Democratic administration from making progress on immigration, you get to demagogue it. As long as you prevent them from fixing it, itâ€™s a political tool.â€

At a hearing on Tuesday, Senator Josh Hawley, Republican of Missouri, accused the Biden administration of allowing â€œcontinued uncontrolled illegal immigration into the country.â€

But to many immigration activists, the presidentâ€™s reaction to the surge of border crossings â€” including a firm declaration that the border was closed and a refusal to allow many migrants to seek refuge in the United States â€” was a grim reminder of the Trump years and of Mr. Obamaâ€™s aggressive policies.

They point to the fact that Mr. Biden has fought civil rights groups in court to allow his administration to maintain one of the Mr. Trumpâ€™s strictest immigration policies: the use of a public health law known as Title 42 that allows the authorities to deny migrants their usual rights to claim asylum during the coronavirus pandemic.

The public health rule is not being used for every migrant at the border. From February to August, officials caught people crossing the southwestern border about 1.24 million times, according to government data. The rule was used to turn them away 56 percent of the time. Others were allowed into the United States for a range of reasons, including exemptions from the public health rule.

But activists argue the use of the authority should be dropped altogether.

â€œThis deterrence-first approach is wrong and simply does not work,â€ said Todd Schulte, the president of FWD.us, a pro-immigration group that has been an ally of the administration.

Administration officials, including staff members from Ms. Harrisâ€™s office, have made calls to humanitarian organizations in recent days. Senior homeland security officials are holding calls this week with advocacy organizations representing the Haitian community and those working on the ground in Del Rio. Top Democrats in Congress sent a letter on Monday requesting a halt to the expulsion of Haitian migrants.

About 1,500 Haitian migrants have been quickly deported, even as thousands more are allowed to enter the United States while they wait for deportation hearings, according to an official familiar with the situation, who spoke on the condition of anonymity because they were not authorized to discuss the matter. Many migrants have made claims of asylum.

Eduardo Maia Silva, a spokesman for the Department of Homeland Security, said the migrants who were not deported were being released with monitoring devices, such as an ankle bracelet.

In some cases, there did not appear to be any clear criteria for who was allowed to stay and who was sent back to Haiti, though single adults are mostly being deported.

Many of the Haitian migrants are not seeking refuge from natural disasters and political violence this year. Rather, they have been living in South America for years, forced from their homes by previous disasters, instability and poverty. Fleeing poverty is often not enough to win asylum in the United States, and many migrants may eventually be deported.

In interviews, several Haitian migrants trying to cross the border said they made the journey because they had lost their visas or their jobs and had no choice but to find a way to survive in the United States.

The question of how much emphasis to place on border enforcement has been a topic of intense debate in Mr. Bidenâ€™s orbit since before he became president.

As a candidate, Mr. Biden vowed to take action on his first day in office to end a Trump-era policy that forced asylum seekers to wait in squalid camps in Mexico while the United States processed their claims.

As officials were drawing up migration policy memos, some advisers pushed back against immediately ending the Trump policy â€” known as Remain in Mexico â€” arguing that it made more sense to unwind the program slowly, according to several people familiar with the discussions who requested anonymity to talk about the debate.

They argued that such an abrupt move, which would open the door to asylum seekers pursuing their claims in the United States, could overwhelm the capacity of U.S. officials. That concern was shared by Mexican officials, who also believed that quickly ending the program could send the wrong message to Central Americans considering the journey north.

But the Biden campaign was already facing pressure from advocates, many of whom doubted the sincerity of his progressive commitments on migration. And people close to Mr. Biden believed that the Trump policy had become so politically toxic that the only feasible option was to make a clean break from it. That view eventually won out when the administration moved to suspend the program the day of Mr. Bidenâ€™s inauguration.

In the months that followed, though, a surge in migration forced officials to reconsider the issue. Even as the administration fought a lawsuit by Texas and Missouri to reinstate the program, officials were privately discussing ways to revive it in a limited form, believing they needed to send a clear signal to migrants not to come to the United States.

At the end of the summer, the Supreme Court ruled that the administration must follow a lower courtâ€™s ruling to restart the program, a decision that officials said they would abide by even as they continued the legal fight.

But in the sprawling federal agencies that deal with immigration â€” Homeland Security, State, Justice and Health and Human Services â€” the debate over how aggressive to be at the border has continued, contributing to what critics on the left and right say appears to be a chaotic and reactive policy.

Several officials who have been involved in discussions about the border said that Susan E. Rice, Mr. Bidenâ€™s domestic policy adviser, has been a leading proponent of more aggressive enforcement, arguing that it is more compassionate to pursue an immigration system that is orderly in order to pass broader reforms.

Esther Olavarria, a Cuban-born immigration lawyer who serves as Ms. Riceâ€™s deputy, has often pushed to allow more migrants into the United States so they can pursue asylum claims, according to three people who have witnessed the discussions. Alejandro N. Mayorkas, the homeland security secretary, is sympathetic to Ms. Olavarriaâ€™s view, several people said, but as the head of the department he has been the public voice of the harsher approach.

â€œIf you come to the United States illegally, you will be returned,â€ Mr. Mayorkas said on Monday. â€œYour journey will not succeed, and you will be endangering your life and your familyâ€™s lives.â€