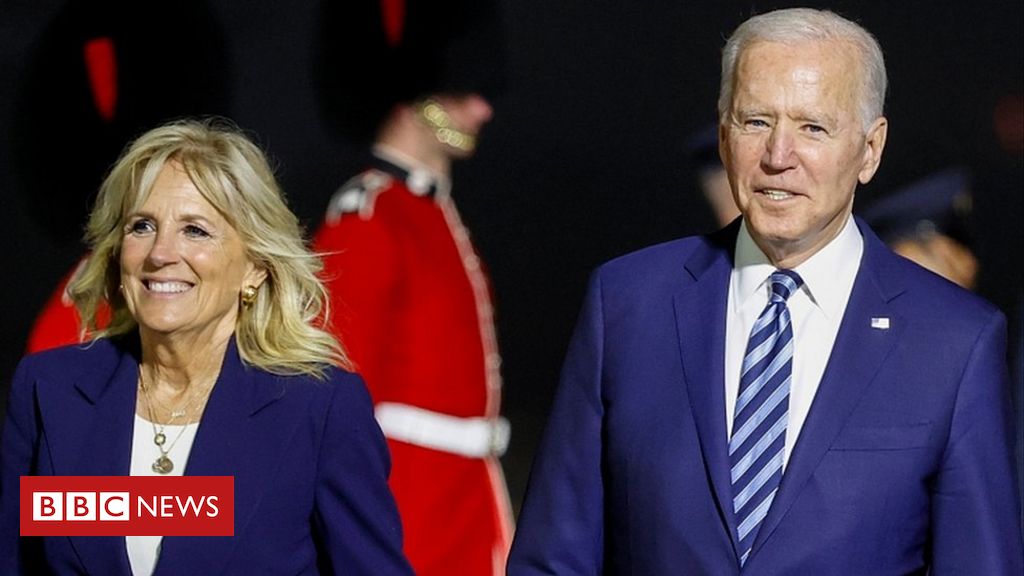 US President Joe Biden has launched his first official overseas trip with a warning to Russia that it faces “robust and meaningful” consequences if it engages in “harmful activities”.

Mr Biden made clear his intention to strengthen ties with US allies, following strained relations under the Trump administration.

President Biden arrived in the UK on Wednesday.

He will meet PM Boris Johnson to agree a new “Atlantic Charter”.

The pact will be a modern version of the one agreed between Winston Churchill and Franklin Roosevelt in 1941, with a focus on challenges including climate change and security.

The BBC’s political editor, Laura Kuenssberg, says the two are aiming to refresh a vital relationship, after the turbulence of the Trump years and the pressures of the pandemic.

During a packed eight-day European visit Mr Biden will meet the Queen at Windsor Castle, attend a G7 leaders’ meeting, and join his first Nato summit as president.

At the end of his trip Mr Biden is due to meet Russian President Vladimir Putin in Geneva.

The White House has indicated that he intends to cover a “full range of pressing issues” with his Russian counterpart, including arms control, climate change, Russian military involvement in Ukraine, Russia’s cyber-hacking activities and the jailing of Russian dissident Alexei Navalny.

Three organisations linked to Mr Navalny were outlawed by a Moscow court on Wednesday for being “extremist”.

Addressing US troops and their families at the RAF Mildenhall airbase in Suffolk on Wednesday, where he landed before travelling on to Cornwall, Mr Biden said he would deliver a clear message to Mr Putin.

“We’re not seeking conflict with Russia,” he said. “We want a stable and predictable relationship … but I’ve been clear: The United States will respond in a robust and meaningful way if the Russian government engages in harmful activities.”

Ties between Washington and Moscow are at a low point over a variety of issues. In April, Mr Putin accused Western powers of trying to “pick on” Russia and warned them not to cross a “red line”.

Mr Biden said that “at every point” during his first overseas trip as president he wanted to make it clear that “the United States is back and democracies of the world are standing together to tackle the toughest challenges, and the issues that matter most to our future”.

Other leaders of the G7 (Group of Seven) will arrive in Cornwall, south-west England, on Friday and meetings will take place over the weekend.

The G7 is made up of the world’s seven largest so-called advanced economies – Canada, France, Germany, Italy, Japan, the UK and the US – plus the EU.

The main topic of conversation will be Covid recovery, including “a stronger global health system that can protect us all from future pandemics”.

In an article for the Times, Boris Johnson said the G7 would “begin the framing of a new global treaty on pandemic preparedness so the world is never caught out in the same way again”.

The Biden administration has said it plans to provide 500 million doses of the Pfizer Covid-19 vaccine to about 100 countries over the next two years.

Mr Biden is expected to warn that the UK-EU trade row could endanger peace in Northern Ireland. He will call on fellow leaders to protect the gains of the Good Friday agreement.

At the end of the summit, the UK – as the host nation – will publish a document outlining what has been agreed by the leaders.

After the G7, Mr Biden and First Lady Jill Biden will meet the Queen at Windsor Castle before flying to Brussels for talks with Nato on Monday and the EU on Tuesday.