Home World Biden Thanksgiving speech: We're at war with the virus, not each other 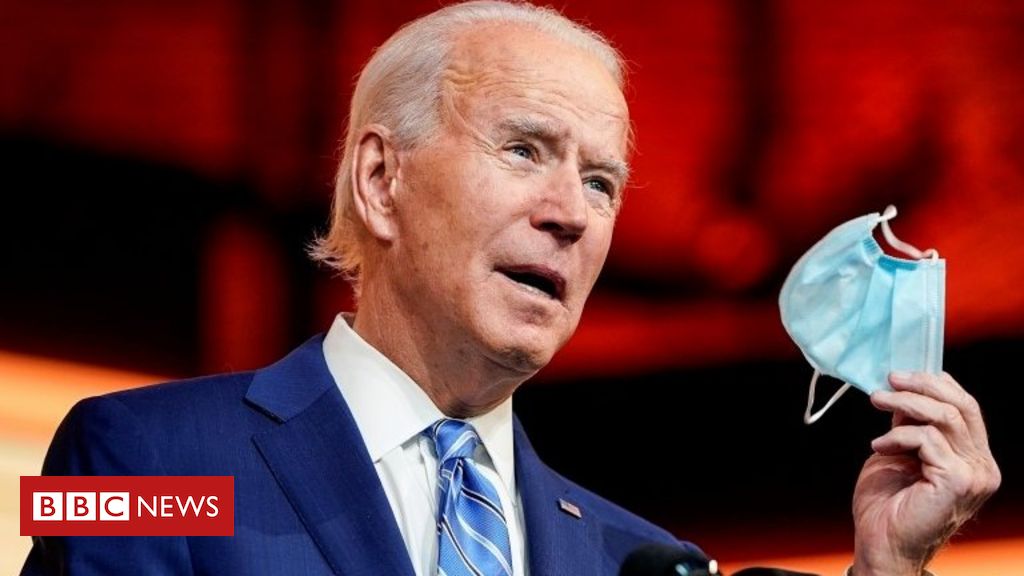 US President-elect Joe Biden has called for an end to the “grim season of division”, as the country faces a long, hard winter with Covid-19.

In a speech for the Thanksgiving holiday, he said Americans were at war with coronavirus, not each other.

The US saw more than 1.2 million cases last week, with 2,200 deaths on Tuesday – the highest number since late May.

Meanwhile, President Donald Trump urged supporters to work to overturn the results of the 3 November election.

Speaking via phone from the White House to an event organised by Republican state legislators in Pennsylvania, Mr Trump repeated unsubstantiated claims about widespread electoral fraud.

“We have to turn the election over,” he said, adding that it was “rigged”.

Mr Trump had been expected to attend the event in person but the trip was cancelled after two associates of his lawyer Rudy Giuliani tested positive for the virus. Mr Giuliani attended in person.

Mr Biden won the election with a comfortable victory in electoral college votes, and the transition to his presidency is already well under way. Mr Trump’s efforts to challenge the results in key states in courts have so far failed.

On Wednesday, China’s President Xi Jinping sent a message congratulating Mr Biden, more than two weeks after his victory was projected by US media.

However, a number of world leaders have still not reached out to the president-elect, including Russia’s Vladimir Putin and Mexican President Andrés Manuel López Obrador, who said on Wednesday that he would not offer congratulations until “the electoral process in the US ends”.

‘We can beat this virus’

In his speech on Wednesday, Mr Biden told the nation: “I believe you always deserve to hear the truth from your president. We have to slow the growth of this virus. We owe it to the doctors and the nurses and the frontline workers… We owe it to our fellow citizens.”

He said Covid-19 had “brought us pain and loss and frustration” and cost many lives.

“It’s divided us, angered us, set us against one another. I know the country’s grown weary of the fight, but we need to remember – we’re at war with the virus, not one another.

“We have to steel our spines, redouble our efforts and recommit ourselves to the fight.”

The president-elect urged Americans to modify their Thanksgiving celebrations. He said that instead of the usual large gathering he would be spending the holiday with just his wife Jill and their daughter and son-in-law, while the rest of the family would be in small groups.

Millions of Americans are travelling to be with their loved ones despite warnings from health officials, although numbers are down on previous years.

The president-elect vowed that in due course, the pandemic would be beaten.

“I know that we can and will beat this virus,” he said. “Life is going to return to normal, I promise you. I believe this grim season of division… is going to give way to a year of light and unity.”

The Thanksgiving holiday comes as new cases of the virus continue to increase in the US.

More than 260,000 Americans have now died with the virus, the largest number of any country in the world, according to a tally from Johns Hopkins University.

What is happening with the transition?

Mr Biden can now access key government officials and millions of dollars in funds as he prepares to take over the presidency on 20 January.

He will also receive the Presidential Daily Brief – an update on international threats and developments. Aide Jen Psaki said he would get his first briefing on Monday, and classified information was already being shared with Mr Biden’s senior team.

On Tuesday he named six key posts in his administration, including his picks for secretary of state and national security adviser. He is set to name more staff including his economic team next week.

Most of his picks will need to be confirmed by the Senate.