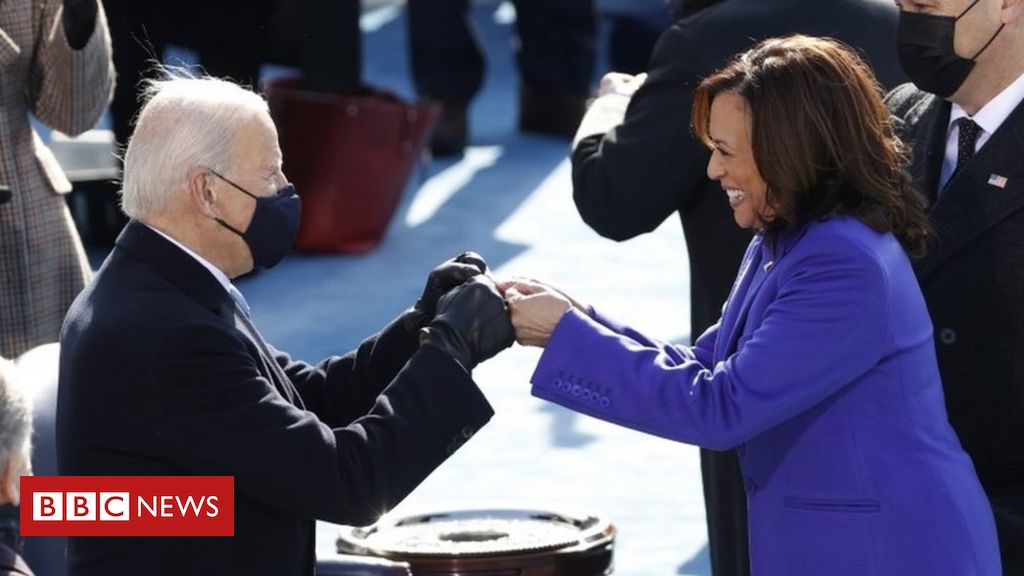 Joe Biden has been sworn in as the 46th US president, ending one of the most dramatic political transitions in American history.

“Democracy has prevailed,” he said after taking the oath of office from Chief Justice John Roberts.

Donald Trump – who has not formally conceded the presidency to Mr Biden – snubbed the inauguration ceremony, in a departure from longstanding precedent.

The new president has announced a raft of measures reversing Trump policies.

Kamala Harris was sworn in as vice-president ahead of Mr Biden. She is the first woman – and the first black and Asian-American person – to serve in the role, a heartbeat from the presidency.

The inauguration took place at the US Capitol. There is extra-tight security after the building was stormed by violent pro-Trump protesters in a deadly riot on 6 January.

Some 25,000 National Guards protected the ceremony, which missed the traditional hundreds of thousands of spectators because of the coronavirus pandemic.

How is inauguration day unfolding?

In his inaugural address, Mr Biden said it was a day of “history and hope”.

“My whole soul is in putting America back together again,” he added.

Highlighting a message of unity after the turbulent Trump years, he promised to be a president “for all Americans” – including those who voted against him.

Among those attending the ceremony were three of his predecessors: Barack Obama – under whom Mr Biden served for eight years as vice-president – Bill Clinton and George W Bush.

The inauguration ceremony included musical performances by Lady Gaga – who sang the national anthem – as well as Jennifer Lopez and Garth Brooks.

An evening concert at the Lincoln Memorial in the city will be hosted by Tom Hanks and will feature Bruce Springsteen, John Legend, Jon Bon Jovi, Justin Timberlake, and Demi Lovato.

The new president’s motorcade was led to the White House by an escort of police motorcycles. He walked the last block with his family, and hugged his wife Jill before entering their new home.

Joe Biden knows he has a hard job ahead of him. In his inaugural address, he outlined the biggest challenges facing his presidency – a devastating pandemic, massive job losses, a threatened environment, urgent calls for racial justice and a resurgence of political extremism.

Mr Biden didn’t offer a laundry list of solutions. Those will come in policy addresses and announcements of executive action in the coming days or even hours.

In his first address as president, he offered only an overarching prescription for the nation’s ills. “Unity is the path forward,” he said. “And we must meet this moment as the United States of America.”

Standing on ground that was occupied two weeks ago by an angry mob supporting his predecessor, Mr Biden called for an end to what he termed an “uncivil war”.

Biden campaigned as a centrist capable of healing the nation’s wounds. In the months since his victory, the breadth of the divisions in the US has only become more apparent. With his party in control of Congress, he will have an opportunity to enact an ambitious presidential agenda. Keeping the nation united while doing so would be a significant accomplishment.

What is Trump doing?

Mr Trump was the first president not to attend his successor’s inauguration since 1869.

In his farewell address at the base, he highlighted what he regarded as the successes of his presidency. “What we’ve done has been amazing by any standard,” Mr Trump said.

The 74-year-old then left for his Mar-a-Lago golf club in Florida, where he arrived later in the morning.

In his last hours as president, Mr Trump granted clemency to more than 140 people, including his former adviser Steve Bannon, who had been facing fraud charges.

The political drama surrounding Mr Trump is far from over. The US Senate is expected to put him on trial soon, following his record second impeachment by the House of Representatives for allegedly inciting the Capitol riot.

On Tuesday, the Senate’s Republican leader, Mitch McConnell, said the mob had been provoked by Mr Trump and fed lies.

What is Biden doing on his first day?

The new president set to work straight after the inauguration. He is expected to sign 15 executive orders aiming to:

Other orders will cover race and gender equality, along with climate issues.

Vice-President Harris swore in three new Democratic senators on Wednesday, leaving the upper chamber of Congress evenly split between the two main parties. This will allow the vice-president to act as a tie-breaker in key votes.

Mr Biden’s legislative ambitions could be tempered by the slender majorities he holds in both the Senate and House of Representatives, however.