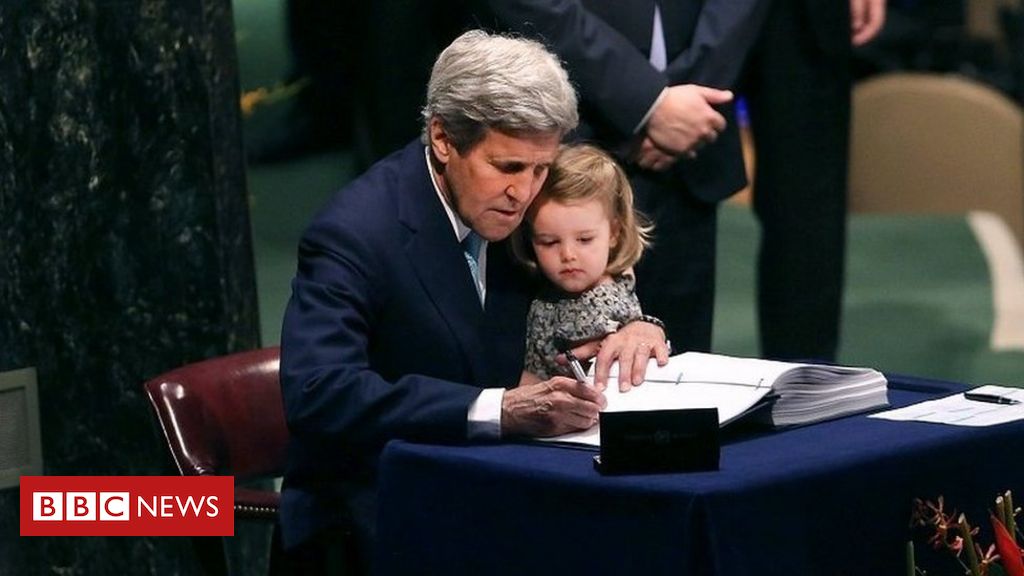 US President-elect Joe Biden is to nominate one of the leading architects of the Paris climate agreement as his climate envoy.

Ex-US Secretary of State John Kerry was one of several named for top positions by the Biden transition team on Monday.

It marks a big break with the climate policy under the Trump administration as Mr Biden makes good on his campaign pledge to tackle climate change.

Other key picks include long-time aide Antony Blinken as secretary of state.

The nomination comes as calls are growing for President Donald Trump to concede the election.

He has made unsubstantiated claims of electoral fraud and is continuing to pursue legal challenges over the result.

Mr Biden is projected to beat President Trump by 306 votes to 232 when the US electoral college meets to formally confirm the winner on 14 December. This is far above the 270 votes he needs.

In a statement following the cabinet announcement on Monday, Mr Biden said: “I need a team ready on day one to help me reclaim America’s seat at the head of the table, rally the world to meet the biggest challenges we face, and advance our security, prosperity, and values. This is the crux of that team.”

Some of the positions require confirmation in the US Senate.

Who is John Kerry and what will he do?

Mr Kerry was chosen for the role of special presidential envoy for climate.

The Biden transition team said the position would see him “fight climate change full-time”. He is also set to be the first official dedicated to climate change to sit on the National Security Council.

Mr Kerry signed the Paris climate agreement on behalf of the US in 2016. The deal committed countries to working to limit the global temperature rise.

Under Mr Trump, the US recently became the first country to formally withdraw from the agreement. But Mr Biden has said he plans to rejoin the accord as soon as possible.

Following news of his new role on Monday, he tweeted: “America will soon have a government that treats the climate crisis as the urgent national security threat it is.”

He was a senator for 28 years and chairman of the foreign relations committee.

What about the other roles?

Mr Blinken was nominated as secretary of state – the most important foreign policy position. The 58-year-old was deputy secretary of state and deputy national security adviser during the Obama administration, in which Mr Biden served as vice-president.

The messages from friends and colleagues that I’ve received over the past 15 hours have been humbling.

Honored to announce, officially, that I have been nominated to serve as Secretary of State. If confirmed, this is a mission I will take on with my full heart.

He is expected to manage a Biden foreign policy agenda that will emphasise re-engaging with Western allies.

Avril Haines was nominated as the first female director of national intelligence. Ms Haines is a former deputy director of the CIA and deputy national security adviser.

Long-time diplomat Linda Thomas-Greenfield was nominated US ambassador to the UN. She also served under President Obama, including as assistant secretary of state for African affairs between 2013 and 2017.

In his choice of a national security team, Joe Biden has signalled that the US is resuming its conventional international role, after four turbulent years of Donald Trump’s America First.

His pick for secretary of state, Anthony Blinken, is an advocate of global alliances. Mr Blinken will lead the charge to re-establish ties with allies and rejoin agreements and institutions rejected by Trump. And there’s no doubt that he’ll be speaking for the man in the White House: Mr Blinken has advised Biden on foreign policy for so long he’s been described as an alter ego.

Another familiar face is former Secretary of State John Kerry. The president-elect’s decision to give him a new cabinet-level position as climate envoy shows he’s treating the issue as a significant national security threat.

But even with the old team this is not going to be Obama 2.0: the landscape has shifted in both America and the world during the last four years. Still, Mr Biden is projecting stability and familiarity, and international leaders know what they will be getting

What about the calls for Trump to concede?

Donald Trump has now accepted that a formal transition should begin for President-elect Joe Biden to take office.

But the president vowed to keep contesting his election defeat and has been pursuing so-far fruitless legal challenges in several states to try to overturn his loss.

It comes as calls are growing for him to accept defeat.

“I have been a supporter of the president’s. I voted for him twice. But elections have consequences, and we cannot continue to act as if something happened here that didn’t happen,” he told ABC.

High-profile Trump supporter Stephen Schwarzman, the CEO of investment company Blackstone, also said it was time for Mr Trump to accept he lost.

“Like many in the business community, I am ready to help President-elect Biden and his team as they confront the significant challenges of rebuilding our post-Covid economy,” he said in a statement reported by US media.

Some Republican lawmakers have also moved to acknowledge Mr Trump’s defeat in the election.