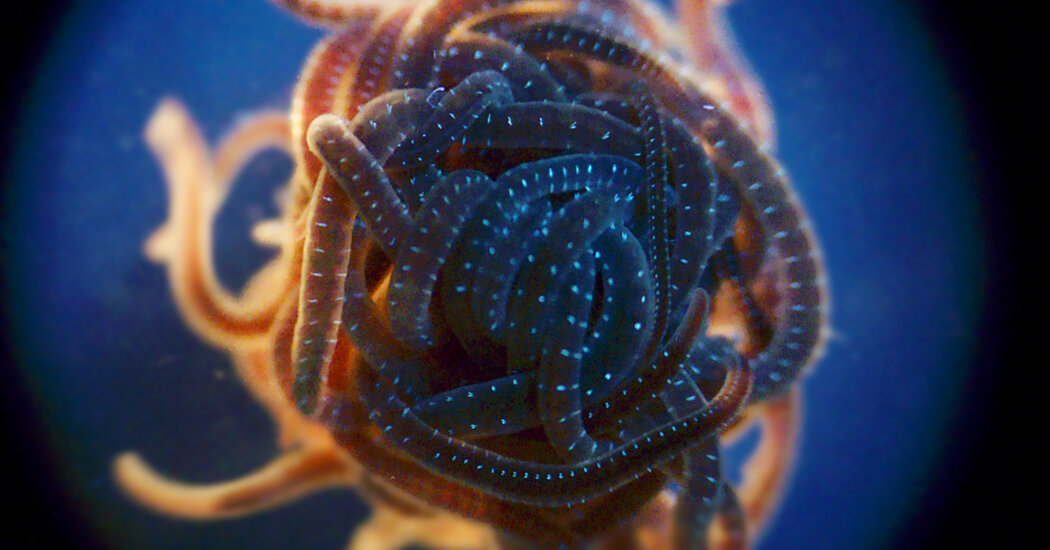 In the wild, a worm blob looks like any other mud ball lolling around the bottom of a pond. But if you poke an unassuming worm blob, it will respond in a way a mud ball never would, wriggling out into a noodly shape that a Pastafarian might mistake for something divine.

This is how Saad Bhamla discovered his first worm blob, in a pond in California. “As you poke it with a stick, it comes alive,” said Dr. Bhamla, a bioengineer at the Georgia Institute of Technology’s school of chemical and biomolecular engineering. Dr. Bhamla’s encounter with the worm blob haunted him for years (in a good way, he says) until he started his own lab and needed a first project.

California blackworms, soft and slender ropes as surreally red as grocery store meat, often live in seasonal pools. When times are good, a worm is simply a worm, wiggling about on its own. When times are bad, a worm must become a blob, entangling with hundreds or thousands of other worms into a slimy, writhing ball. And, like an animated ball of yarn, the worm blob can move as one unit, meandering away from predators or stress.

“They remain braided and twisted into this cohesive unit that’s crawling around,” said Chantal Nguyen, a postdoctoral associate and physicist at the BioFrontiers Institute at the University of Colorado Boulder.

But how does a worm attain and maintain blobdom? In a recent study in the journal Frontiers in Physics, a group of researchers including Dr. Nguyen and Dr. Bhamla unraveled the secrets of the blob’s ability to move. They did so by creating a computer model of entangled California blackworms.

“It was pretty horrific and pretty shocking, but also kind of beautiful,” said Albert Kao, a postdoctoral fellow studying collective behavior at the Santa Fe Institute in New Mexico, of the worm blobs. The simulation, he added, “lays a path forward for new kinds of models for similarly entangled systems.”

Since time immemorial, people have witnessed groups of animals moving collectively and in unison: starlings flock, fish school, midges swarm, and heavy metal heads mosh. But few people have had the privilege of, or the interest in, observing worm blobs.

A worm blob behaves as a solid and a fluid, like a ball of dough or a glob of shampoo. It only takes around 10 worms to form a coherent blob. A blob of about 100,000 worms resembles a lump of (red) pizza dough. There is no known limit to how many worms can form a blob, except, perhaps, your imagination.

When Serena Ding, a researcher at the Max Planck Institute of Animal Behavior, first saw a photo of blackworm blobs, her mind raced. “I was first just shocked,” said Dr. Ding, who was not involved with the paper. “And then I was grossed out, and then I was fascinated.”

Dr. Ding, who studies blobbing in the much-studied nematode Caenorhabditis elegans, described her C. elegans blobs as “strongly overlapping, like a bowl of spaghetti noodles.” Blackworm blobs “are more like spaghetti noodles dropped on the floor,” she said, frowning, in a Zoom call. “C. elegans is named for being elegant. These ones are just … not.”

But it was precisely this messy splat of blackworm blobs that captured Dr. Bhamla’s heart. To him, the blobs feel like pizza dough flowing through fingers. “But it’s composed of worms,” he said. “Like a nightmare come alive.”

In February, Dr. Bhamla and a group of researchers described the dynamics of worm blobs in the journal Proceedings of the National Academy of Sciences.

For that paper, Yasemin Ozkan-Aydin, who is now a robotics engineer at the University of Notre Dame, led the experiments. When Dr. Ozkan-Aydin took the worms out of water, they slithered on individual quests to return to it. If unable to find water, they blobbed, an entanglement that enabled them to survive out of water 10 times longer than individual worms.

“The reason they are gathered together is not out of the kindness of their hearts, but using the rest of the individuals to protect against dessication,” said Simon Garnier, a biologist at the New Jersey Institute of Technology who was not involved with the research.

Dr. Ozkan-Aydin also found that the worm blobs moved collectively away from stressors like light and heat. A worm blob on a hot plate will move toward a cooler section, and a worm blob under a spotlight will move as a blob. But if the plate is heated to around 100 degrees Fahrenheit, too hot for the worms to survive, the blob rapidly disentangles. In smaller numbers, the blob propels itself by dividing the labor, with outstretched, pulling worms up front and coiled, wiggling worms in the back reducing friction. Larger worm blobs, which are harder to visualize because of the sheer density of their constituents, may move in more complex ways.

Orit Peleg, a physicist at the University of Colorado and an author on the new paper in Frontiers in Physics, first glimpsed the blobs on a visit to Georgia Tech. The blobs reminded Dr. Peleg of biological polymers she once worked with, like DNA, except the blobs were visible to the naked eye and made of worms. When Dr. Peleg showed Dr. Nguyen a video of a worm blob solving a maze, Dr. Nguyen needed no further convincing to work on the worms.

Dr. Nguyen designed a simulated model of both individual and blobbed blackworms, involving small blobs of 20 identical worms. Each worm was represented by a series of strung beads, able to bend and stretch like a real worm. Dr. Nguyen introduced an attachment force into the model that spurred the model worms to cling together into a blob in two dimensions.

“It’s not what the real worm is doing, and yet they still reproduce visually and also quantitatively the behaviors of the blob,” Dr. Kao said of Dr. Nguyen and her colleagues.

In early prototypes of the model, the simulated worms were uncooperative, either disentangling themselves from the blob or hunkering down in one place. Dr. Nguyen fiddled with the stickiness of the worms and the strength of their individual propulsion until she found a sweet spot where the worm blob could finally move as one.

The model shows us “there isn’t this clear-cut divide” between living materials and nonliving materials, Dr. Peleg said, adding that the researchers hope the model might inspire entangled robots made of flexible materials.

The researchers plan to expand their model to three dimensions to gain more insight into how the worms entangle, twist and braid together. Dr. Garnier suggested that this expansion could answer one of his burning questions about the blob: where inside the blob a worm would most want to be.

The best spot, he mused, might be close enough to the surface to grab resources but deep enough inside that the worm is not the first line of defense. “Collective systems have to deal with these trade-offs,” he said. “When there’s too many of us, not enough cake for everyone, things start to go ugly.”

Luckily, Dr. Bhamla’s lab has tens of millions of blackworms that are ready to blob. The coronavirus pandemic and the drought made the worms a hot commodity, so Dr. Bhamla’s lab grows its own. Some days he discovers a braided chain of worms slithering up a wall in an attempted jailbreak.

In the morning, when the researchers flick on the overhead lights, all the freewheeling worms scurry together into blobs until they adjust to the light and relax. “I’m like, ‘What party was going on in there when it was dark and cold?’” Dr. Bhamla said. “It is not hard to fall in love with them.”