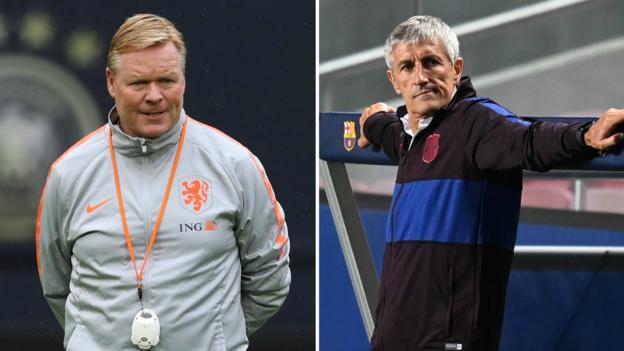 Barcelona have sacked manager Quique Setien, three days after his side’s humiliating 8-2 defeat by Bayern Munich in the Champions League.

Netherlands manager Ronald Koeman, who played for the Catalan giants between 1989 and 1995, is set to replace Setien at the Nou Camp.

A new coach will be announced “in the coming days,” said the club.

Barca’s thrashing by German champions Bayern on Friday was the fourth time in the past five years they have been knocked out at the quarter-final stage of Europe’s elite competition.

Setien, who replaced Ernesto Valverde at the Nou Camp, had said after the defeat that it was “time for us to review and take the decisions which are needed for the future”.

After he was sacked on Monday, Barcelona said: “This is the first decision within a wider restructuring of the first team.”

The club also announced next year’s presidential elections, scheduled for June, will be brought forward to March 15.

Barcelona defender Gerard Pique said he would be the “first to leave” if the club wished to make changes.

Koeman is going to be given a two-year deal. He would have said yes to a one-year deal. He has been trying to get to Barcelona for a long while.

Former Tottenham manager Mauricio Pochettino was contacted and there were talks with him even though the chairman realised the fans wouldn’t like him [as a former Espanyol player and manager].

Pochettino is a better option. There is no doubt about that.

But we’re not talking about the real issue. A club that’s in disarray with a debt that some calculate could be 700m euros unable to move on because they spend 70% of their income on wages for the first team.