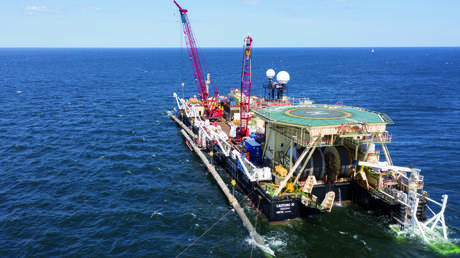 Austrian President Alexander Van der Bellen says he is against the idea of blocking Russiaâ€™s Nord Stream 2 gas pipeline over the situation with the alleged poisoning of Russian opposition figure Alexey Navalny.

“I emphasize that personally I do not see any connection between the case with Navalny and Nord Stream 2,â€ he said on Tuesday following talks with Ukrainian President Volodymyr Zelensky in Vienna. â€œFor me Nord Stream 2 is a commercial project that essentially concerns Russia, Ukraine and European partners,” Van der Bellen added.Â

According to the Austrian president, the fate of the gas pipeline should be decided in Europe, and not in the United States.

“This is a commercial issue between the partners who have been cooperating for many decades. In conclusion, I would like to add that this economic and political issue [around Nord Stream 2] should be resolved in Europe, not in Washington,” he said.

His comments follow Berlin saying earlier this month that it was wrong to link the Nord Stream 2 project with the Navalny incident. German Chancellor Angela Merkel said that the gas pipeline should be completed.Â

Meanwhile, the US has already threatened to punish Russia with sanctions, and a government spokesman said that Germany would discussÂ â€œan appropriate joint responseâ€Â with leaders in the European Union and Washington.

Also on rt.com
Will the alleged Alexey Navalny poisoning sink the Nord Stream 2 pipeline? It might, but it shouldnâ€™t

Once completed the Nord Stream 2 pipeline project will bring a total capacity of 55 billion cubic meters of gas per year from the coast of Russia through the Baltic Sea to Germany. The project wasÂ suspended at the end of 2019 when the Swiss pipe-laying company Allseas stopped work due to a threat of US sanctions. The German government has repeatedly spoken in favor of the project, despite pressure from many of its western allies.