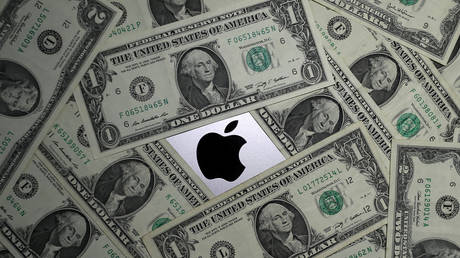 Recent market shake-ups have allowed the iPhone maker to topple Saudi Aramco, depriving the oil giant of its long-held title of the world’s most valuable company.

Apple stocks hit record highs on Friday, adding around 10 percent and closing at over $425 per share. The boost came as investors cheered historically strong quarter results, which showed that the smartphone giant recorded $59.7 billion in revenue and a double-digit rise in sales despite the disruptions caused by the coronavirus pandemic.

Also on rt.com
Amazon posts record profits as Apple thanks stimulus aid for forecast-beating earnings, despite worst US quarter on record


Thanks to Friday’s gains, Apple’s market cap rose to $1.82 trillion, leaving behind Saudi Aramco, which is currently valued at around $1.76 trillion. Since its blockbuster IPO – the biggest in history – on the Saudi stock market in December, 2019, the oil giant has been considered the undisputed leader not only among energy peers, but also among other global corporations.

However, the halt in travel and manufacturing triggered by the Covid-19 outbreak has crippled demand for oil and, thus, had a tremendous impact on Saudi Aramco as well as all energy companies’ performance. In the first three months of this year, the company’s profits tumbled 25 percent, and analysts do not expect any miracle recovery in the oil major’s second quarter financial results, set to be released on August 9. According to Bloomberg, Aramco’s revenue could have more than halved in the second quarter from $76 billion a year.


India’s Reliance, owned by the fifth richest man in the world, Mukesh Ambani, seems to be the only exception among energy majors as it has recently beaten US’ Exxon to become the second biggest energy firm in the world. The success, however, is mostly explained by the company’s retail and digital expansion that drew interest from major foreign investors, including Miscorosoft, Facebook and Google.

Apple is not the only tech company that enjoyed enormous profits amid the coronavirus pandemic. Amazon and Facebook have also strengthened their market positions, adding more millions to the pockets of their CEOs.