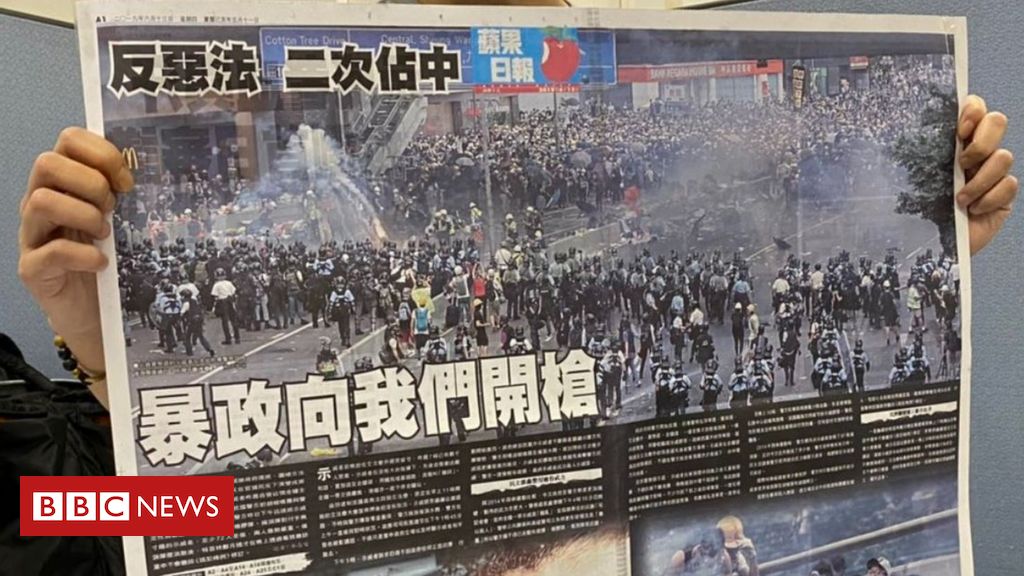 Hong Kong’s largest pro-democracy paper Apple Daily has announced its closure, in a blow to media freedom in the city.

The tabloid’s offices were raided last week over allegations that several reports had breached a controversial national security law.

Police detained the chief editor and five other executives, and company-linked assets were frozen.

The publication had become a leading critic of the Hong Kong and Chinese leadership.

The Apple Daily management said that “in view of staff members’ safety”, it had decided “to cease operation immediately after midnight” – making Thursday’s publication the final printed edition.

The Hong Kong Free Press website reports that a million copies of Apple Daily will be printed on Thursday.

UK Foreign Secretary Dominic Raab said the paper’s closure was a “chilling blow to freedom of expression in Hong Kong”.

The digital version of the 26-year old paper will no longer be updated after midnight.

A separate announcement by publisher Next Digital thanked the readers for their “loyal support” as well as its journalists, staff and advertisers.

The tabloid has long been a beacon of media freedom in the Chinese-speaking world, and is widely supported by political dissidents in Hong Kong.

Chinese officials have repeatedly said media freedoms in Hong Kong are respected, but are not absolute.

Ronny Tong, a member of Hong Kong’s government, accused the paper of orchestrating a political stunt in its decision to shut down.

“People around the world probably will accuse the Hong Kong government of forcing Apple Daily to close down. But the fact of the matter is, they don’t need to,” he told the BBC.

As night fell, supporters of the paper gathered outside its office, and lit their phone flashlights as a show of solidarity. They were also heard chanting “add oil,” an expression that was used during the mass protests in 2019.

Those inside, returned the gesture, waving to those below.

‘A knife over your head’

The closure comes after sustained pressure on the paper from the authorities.

Apple Daily founder Jimmy Lai, who has long been a critic of the Chinese Communist Party, is already in jail on a string of charges.

The arrests struck fear in employees at the paper and a number quit the publication soon after.

An editorial staff member at the paper described the feeling of unease as “having a knife over your head”. “If you don’t leave by yourself, you may be held criminally responsible,” she told BBC Chinese.

A current affairs reporter for Apple Daily said after last week’s raid: “I had mixed feelings. On one hand, I was angry at the ruthlessness of the regime. I was also sad that Hong Kong might not have Apple Daily but I also felt fear.”

From sensationalist tabloid to voice of dissent

It started off as a successful local tabloid, best known for its sensationalist articles and bold catchy headlines – promising sex, drugs and scandal. But over the past 26 years, it evolved into one of the city’s loudest pro-democracy voices – one of few that dared to challenge China.

Its founder Jimmy Lai was labelled by Beijing as an “anti-China troublemaker”, the paper accused of causing chaos. Advertisers were told to stay away from Apple Daily but Lai and his team did not back down. In fact, the paper doubled down on its critical coverage.,

“They were really a strong and loud critical voice to the government,” one professor told me. “It’s a terrible blow for press freedom in Hong Kong. I think everyone is in shock right now.”

As for what lies ahead – Hong Kong’s government is set to introduce a fake news legislation – raising fears that this could be used as a new tool to stifle dissent.

Police had accused the newspaper of publishing more than 30 articles calling on countries to impose sanctions on Hong Kong and mainland China since 2019.

The paper then said it only had enough cash to continue normal operations for “several weeks”.

On Wednesday, a 55-year-old man, identified as an Apple Daily columnist, was arrested on suspicion of conspiring to collude with a foreign country or foreign forces, local media reports said.

What is the national security law?

China introduced the national security law in Hong Kong last year in response to massive pro-democracy protests that swept through the administrative region.

The law essentially reduced Hong Kong’s judicial autonomy and made it easier to punish demonstrators and activists. It criminalises secession, subversion and collusion with foreign forces with the maximum sentence life in prison.

Since the law was enacted in June, more than 100 people have been arrested under its provisions.

Kathy Griffin: US comedian has surgery after lung cancer diagnosis

Senator Lindsey Graham Says He Has a Breakthrough Covid Infection

The Death Toll Continues to Rise Following Flooding in China