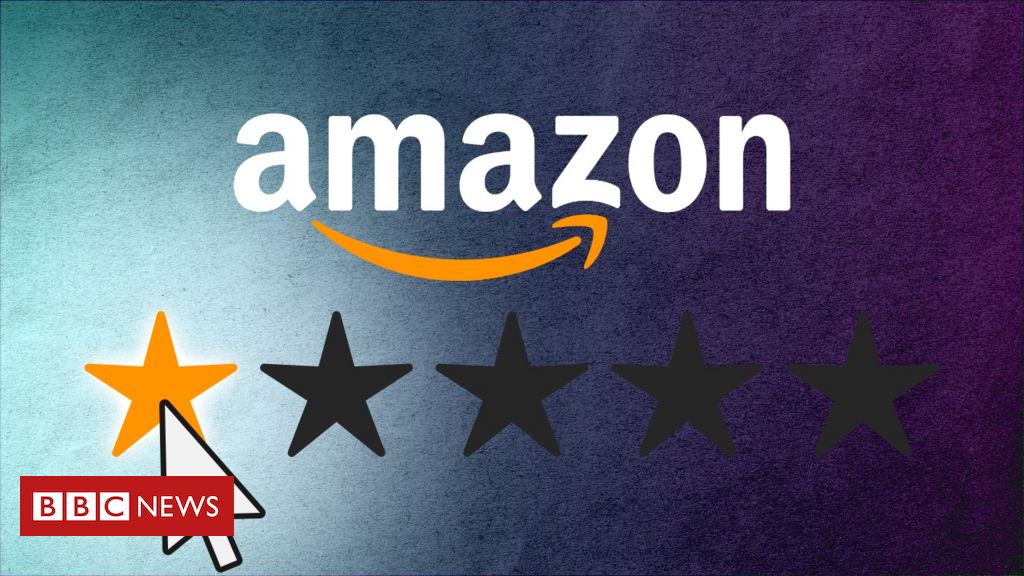 Amazon’s marketplace is being abused by independent sellers using one-star reviews to harm rivals, the BBC has been told.

Newsnight spoke to a number of those affected who believe their sales have suffered as a consequence.

A consumer rights champion now wants a UK watchdog to investigate further, as part of a probe into fake reviews that is already under way.

Amazon claims to be “relentless” in tackling review manipulation.

Even so, some of those targeted believe it cannot eradicate the problem.

Third-party vendors have sold more physical goods on Amazon’s site than the US tech giant itself every year since 2015, according to its own figures.

Perhaps it’s not surprising then that some online retailers are playing dirty.

“The sad thing is that you could have 50 positive reviews, like five-star reviews – but if you’ve got one or two one-star reviews, then it’s going to be very difficult to compete,” Janson Smith, a third-party Amazon seller, told the BBC.

I asked if he would want an additional 20 five-star reviews, if they were accompanied by a single one-star rating.

Fake positive reviews on the net are a well-known problem,.

Only last week, the Financial Times reported some of Amazon’s top-ranked UK reviewers appeared to be engaged in such activity. Amazon removed 20,000 fake positive posts over the weekend.

But some sellers now believe it’s fake one-star feedback that is the new front of review manipulation.

She says she had about 60 reviews, almost all of them positive. She was making roughly £3,000 a month.

Then something strange happened – she got a flurry of one-star reviews.

“Initially when the first couple came it didn’t make too much of an impact because I had enough positive reviews to sort of offset it”, she recalled.

“But when more and more started coming in, I noticed that sales just dropped off a cliff.

Ella believes some of these negative reviews were fake, and the stress began to get to her.

After a few months she abandoned the venture.

Janson Smith says something similar happened to him, but he decided not to go down without a fight.

He cross-referenced the negative reviews he had received with the orders, and came to realise almost all had come from suspicious accounts. He managed to get Amazon to remove them.

He has since set up an online consultancy to help other Amazon sellers facing this and other predicaments.

“I think that now sellers have realised it’s very hard to fake getting four-star or five-star reviews,” he explained.

“So they’re like ‘hang on let’s now bring the competition down so that our score is relatively higher’.”

Collectively, independent sellers generate about £150bn of global sales a year via Amazon.

Find the right niche and there’s money to made.

There are legitimate ways to take down a negative review. For example, if a seller receives bad feedback because of a poor delivery – for which they were not responsible – they can get Amazon to remove it.

But there’s one big no-no: Amazon’s rules forbid trying to bribe or blackmail customers into removing them.

That’s not to say some unscrupulous sellers don’t try.

One customer – who asked to remain anonymous – told the BBC about ordering some knitting needles which never arrived.

She left a negative review as a result. On seeing it, the Chinese seller offered a full refund if she deleted it.

I alerted Amazon to the case. It has since suspended the vendor.

Consumer group Which? says this problem isn’t unusual, and extends to other online stores.

“People have told us when they’ve left a negative review, they’ve have had to negotiate with the seller or even felt bullied by the seller to remove their legitimate negative reviews” said Neena Bhati, the group’s head of campaigns.

Amazon responded that it wanted people to shop with confidence on its platform, and was addressing the problem.

“We have clear policies for both reviewers and selling partners that prohibit abuse of our community features, and we suspend, ban and take legal action against those who violate these policies,” it said.

In May, the Competition and Markets Authority launched an investigation into online reviews. Which? now wants it to include negative review manipulation.

Whatever it eventually recommends, it’s likely that efforts to stop review manipulation will only ever offer temporary respite. Close one loophole, and others will be found.

“I do genuinely think that Amazon does as good a job as it can, but I think it’s a bit of a cat-and-mouse game” said Mr Smith.

“Amazon’s one step behind, and they’re always playing catch-up.”