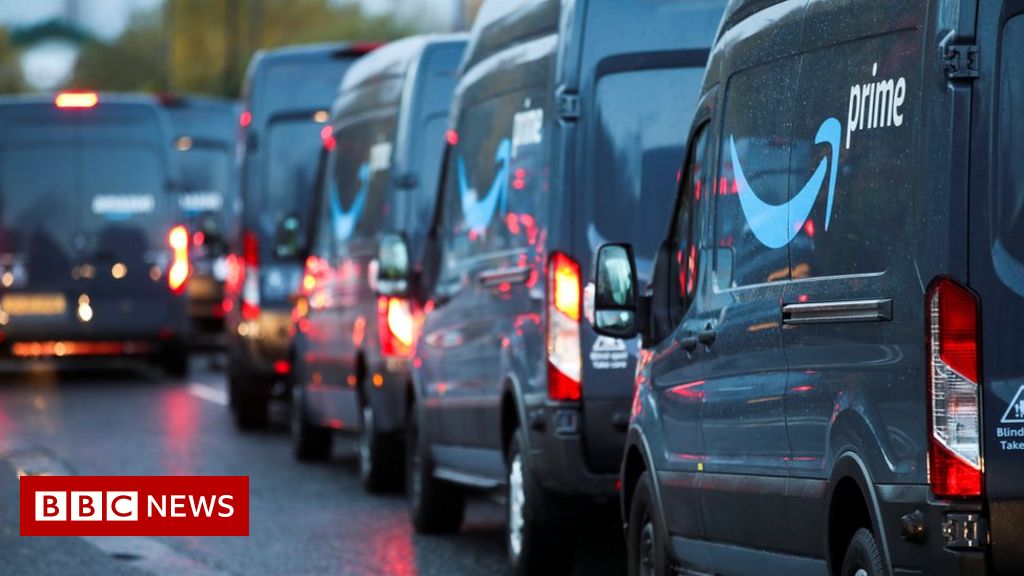 Protests are being staged at Amazon buildings in the UK, US, and Europe – on Black Friday.

The shopping sales day is among Amazon’s busiest all year.

An international coalition of unions, equality and environmental groups called “Make Amazon Pay” is staging a day of action.

The movement is demanding Amazon make changes to its business, including improved pay, an end to employee surveillance, and union engagement.

In an unrelated separate protest, the Extinction Rebellion environmental group has blocked the entrances to Amazon distribution centres in the UK.

It is staging similar action abroad in Germany and Netherlands.

The Make Amazon Pay coalition is not affiliated with Extinction Rebellion group, but also has environmental groups such as Greenpeace among its members.

“Amazon takes too much and gives back too little,” it claims – backed by trade unions, grassroots campaigns and non-profit-making organisations in individual countries.

In the UK, that includes:

Many employees will be working on the day, but campaign groups which include Amazon workers are staging protests at Amazon buildings in Coalville, Leicestershire, Coventry, Peterborough and at its London headquarters.

But strikes are being encouraged elsewhere.

In Germany, for example, the union Verdi called on employees at major shipping centres to strike, beginning on Wednesday night. And in France, major union CGT is also calling for workers to down tools.

Worldwide, nearly 50 organisations have signed up to a list of “common demands”, published by the Make Amazon Pay coalition, which include:

Owen Espley, from the War on Want campaign group, said: “Amazon is abusing its dominance across online retail, cloud services, and logistics, to create unfair competition that is driving down standards for everyone.

“It’s time for Amazon to pay fair wages, fair taxes, and for its impact on the planet.”

The GMB union also released figures on Friday that it said showed ambulance callouts to Amazon warehouses increased by nearly 50% in the run-up to Black Friday – something it blames on staff rushing to hit “crushing targets”.

It filed Freedom of Information requests with four ambulance trusts near “major Amazon sites”. It said the data shows that over five years, November had the most ambulance visits.

Amazon said such claims were “using incomplete information that’s without context and designed to intentionally mislead”.

“We know we’re not perfect and are continuing to get better every day, but the fact is that Amazon has 40% fewer injuries on average compared to other transportation and warehousing businesses in the UK,” a spokesperson said.

It claimed the “vast majority” of ambulance visits to its buildings were for pre-existing conditions.

Mick Rix, from the GMB Union, said: “This company is a pandemic profiteer that can afford to do better.”

“It’s time for Amazon sit down with their workers’ union GMB and make Amazon a great, safe place to work. “

Amazon reported a tripling of profits earlier this year, attributed to its success during the Covid-19 pandemic.

Amazon issued a prepared statement in advance of the protests about the wider Make Amazon Pay movement.

“These groups represent a variety of interests, and while we are not perfect in any area, if you objectively look at what Amazon is doing in each one of these areas you’ll see that we do take our role and our impact very seriously,” it said.

“We are inventing and investing significantly in all these areas, playing a significant role in addressing climate change with the Climate Pledge commitment to be net zero carbon by 2040, continuing to offer competitive wages and great benefits, and inventing new ways to keep our employees safe and healthy in our operations network, to name just a few.”