Home Economy Alibabaâ€™s value plummets by over $340 billion as China cracks down on... 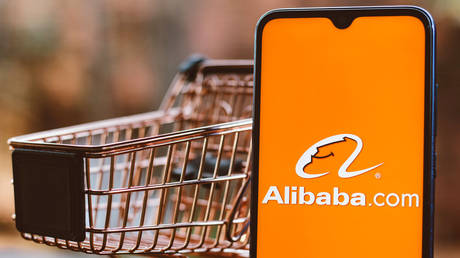 Chinese internet giant Alibaba has lost $344.4 billion in market capitalization over the past year, amid Beijingâ€™s efforts to rein in the countryâ€™s massive tech sector to stop monopolistic practices.

The companyâ€™s shares collapsed gradually but steadily throughout the year. After reaching an all-time high of $317.14 per share in October 2020, they hit a historic low of $139.63 per share on October 4, 2021. Although they have shown a slight growth in the past week, they are still 44% below their 2020 peak.

Also on rt.com
Chinaâ€™s crackdown on firms trading in US could kill $2 TRILLION listings market

The sharp collapse began last year, when regulators suspended the planned IPO of Alibabaâ€™s technology subsidiary Ant Group, which was set to become the largest in the history of the entire stock market. In addition, an antitrust investigation was launched against the tech giant, as a result of which the company was fined a record $2.8 billion. Beijing then tightened its control over the firmâ€™s activities and demanded it reorganize its fintech business.

Shortly afterwards, the authorities began to tighten their grip on other sectors as well, which led to the fall of many Chinese stocks. For instance, in an effort intended to prevent student burnout, tutoring companies were banned from expanding their operations by attracting private and foreign capital, or launching IPOs. Beijing also issued regulations and investigated firms involved in video gaming; biotech, IT, and the manufacture of semiconductors, electronic cigarettes, alcohol and baby food.

In August this year, the Chinese government published a 2021-25 development plan, calling for tighter regulation of vast sectors of the economy. It is planning broad legislative changes in areas such as security, technology, personal data and antitrust regulation.

Alibabaâ€™s capitalization loss sets a record among all companies trading across the world, according to Bloombergâ€™s calculations.