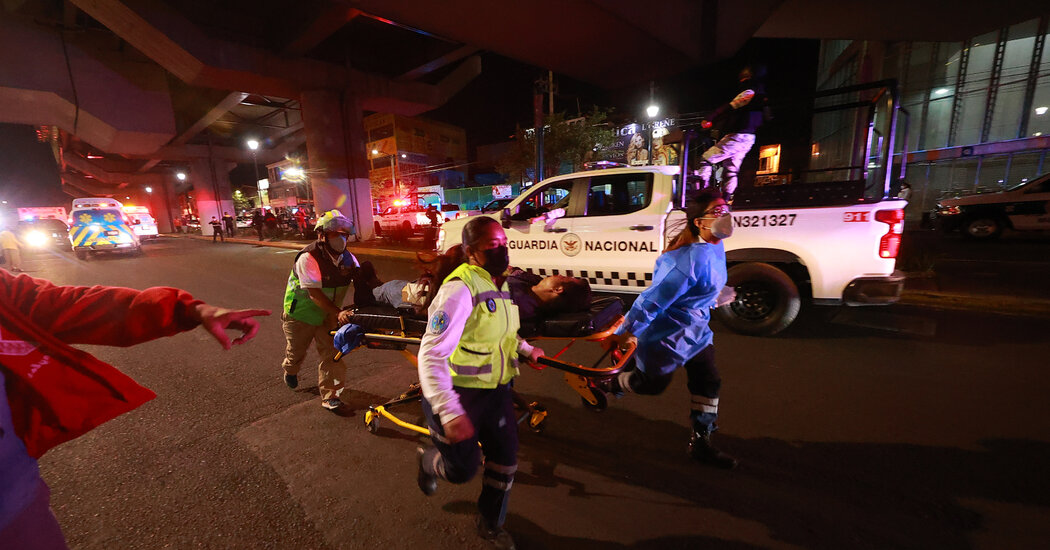 Americas|People searched for missing loved ones, including children.

Mayor Claudia Sheinbaum said on Tuesday that 21 victims had been found dead at the scene of the accident, and three others had died after being taken to hospitals. Authorities released the names of more than 70 injured people taken to local hospitals.

But for some, the search for their loved ones was just beginning.

“I’m looking for my son,” Marisol Tapia told reporters at the scene of the accident through sobs. “I can’t find him anywhere, in any of the ambulances.”

Hours later, her 13-year-old son, Brandon Giovani Hernández Tapia, was still missing: Ms. Tapia and her mother were growing desperate, unsure if he was dead or alive.

“I went to all the hospitals and they say he’s not there,” she told reporters gathered back at the crash site later on Tuesday morning for a news conference with opposition politicians. “The metro wasn’t built on its own — this flaw has been there for a long time and no one did anything.”

On social media, families searched for any scrap of news about missing people. Details of those injured began to emerge, but the dead remained unnamed. Four bodies had been trapped inside one of the train carriages, according to Ms. Sheinbaum.

“All the support will be given to the victims,” Ms. Sheinbaum said during a morning news conference. “Our solidarity with all the family members who lost someone.”

A total of 79 injured people had been taken to hospitals, according to Ms. Sheinbaum, three of whom later died. Among those hospitalized were three minors and three elderly people.

Some witnesses to the event were also injured.

“I was going to my mother’s house and a large stone fell on me,” Esmeralda Serrano, 21, who lives in a neighborhood near where the crash occurred, told El País, a Spanish-language newspaper.

Late on Tuesday morning, cries for help to find the missing were still pouring onto social media, while the hashtag #NosFaltan23 or ‘We’re missing 23’ became a rallying cry.

“Friends I need your help, we can’t find her (Nancy Lezama Salgado),” wrote one user on Twitter. “She was also on the subway, we’ve only found her sister, please share.”

Government officials, including those who were involved in the fatal subway line’s construction and maintenance, sent their condolences to the families of the victims.

“It is the most terrible accident we have ever had,” said Marcelo Ebrard, the country’s foreign minister who was mayor when the now-collapsed line was first built, at a news conference. “A very sad day for Mexico City, for everyone.”