Home World USA After a Year of â€˜Rampantâ€™ Cheating, Elite Bridge Tries to Clean Up 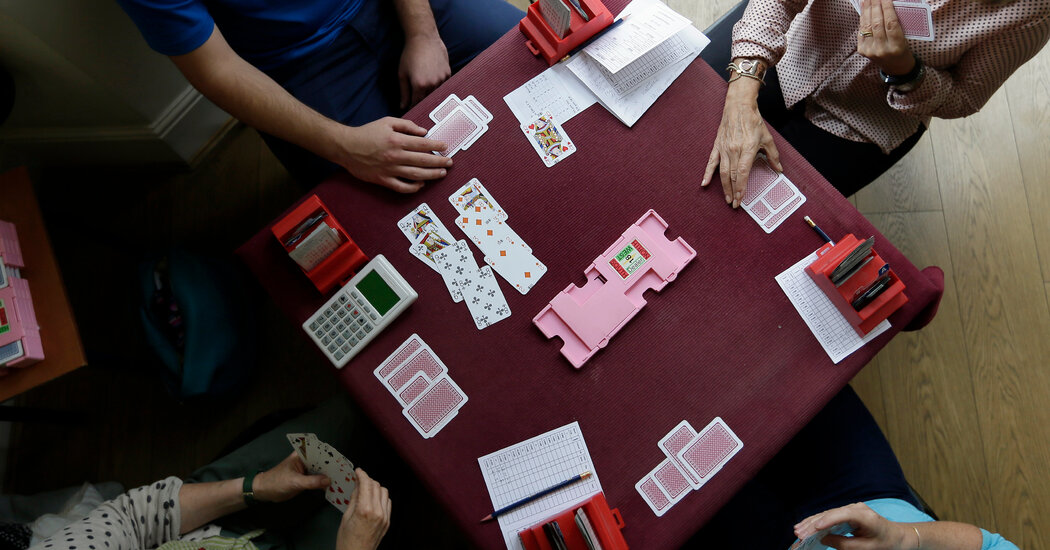 Ten days after the first elite player confessed to cheating, a second said she had done it, too.

A few months later, wealthy sponsors pleaded for players to clean up the game. Then officials suspended one top player, and another, and this summer 30 teams forfeited rather than play someone accused of cheating.

For over a year, the topic of cheating has consumed many players in the highest levels of contract bridge, the card game with a reputation for complex gameplay and clubby community.

In interviews, top players, league officials and data analysts described a surge in cheating as the coronavirus pandemic pushed players online, and a subsequent backlog of cases in the gameâ€™s byzantine disciplinary system.

â€œItâ€™s a problem. I think anybody who says itâ€™s not a problem is probably naÃ¯ve,â€ said A.J. Stephani, the chair of the appeals and charges committee â€” a kind of Supreme Court of bridge â€” for the American Contract Bridge League, North Americaâ€™s biggest federation.

Bridge is played by partners sitting opposite each other, trying to win a certain number of tricks in each hand based on a predetermined bid, or contract. In person, cheating usually meant surreptitious signals to share â€œunauthorized information,â€ like who has a good suit. A foot might tap out a coded message, a pencilâ€™s angle could signal a strong hand, or a card placed vertically or horizontally could guide a partner how to play.

When the pandemic forced players online, teammates could cheat effortlessly: talking side-by-side on the sofa, chatting by phone, or using spectator accounts to see everyoneâ€™s cards.

But Mr. Stephani cautioned that, despite assertions by some analysts, the extent of the problem was unknown. â€œWe just donâ€™t know what percent of bridge players playing online are cheating,â€ he said.

Cheating has â€œabsolutely explodedâ€ during the pandemic, said Michael Kamil, the winner of nine North American championships and a player who has turned his skills toward detecting cheating. He described the problem as â€œrampant.â€ With remote play, organizers couldnâ€™t look for secret signals, analyze video of important matches, or tell whether partners were talking.

They had only a digital record of decisions in the game and an incredibly complicated set of rules. The leagueâ€™s disciplinary code, until recently, ran to more than 29,000 words.

â€œYou wouldnâ€™t believe how ridiculous it is,â€ said Mr. Stephani, who is also a law professor at the University of Cincinnati. â€œItâ€™s just awful.â€

He estimated that the league had worked through more than two dozen cases in the past 16 months, barely a dent in the number of suspected instances of cheating. League leaders were â€œexploring different optionsâ€ for how to better detect, prevent and process cases, he said.

Compounding the problem, cheating was for decades a taboo subject in the genteel, tiny community of elite bridge â€” a game that evolved from 19th-century whist and was modified by a Vanderbilt on a yacht in 1925.

â€œIt was whispered about, there were rumors,â€ said Ellis Feigenbaum, 60, the director of a club in Costa Mesa, Calif. â€œBut we assume people to be gentlemen, and honorable, and ladies.â€

That assumption is so strong that the league still has a rule that threatens a player with suspension for publicly accusing another of cheating.

Serious cracks in that culture began in 2015, when a top player named Boye Brogeland described cheating by top international players. He said internet cheating in 2020 had shocked players much like his allegations years ago, and that it was critical to confront the problem openly.

â€œYou have to go on some sort of crusade to do something, otherwise within the system itâ€™s just so hard to get anything done,â€ he said.

Since 2015, cheating has either â€œgotten worse or our ability to detect it has gotten better, or both,â€ said Doug Couchman, the chairman of the leagueâ€™s advisory council.

Mr. Couchman said that bridge should confront the problem publicly. â€œWe canâ€™t keep pretending something isnâ€™t there,â€ he said. â€œItâ€™s part of the maturation process. Weâ€™re entering what I hope could become known as the modern era of bridge.â€

If bridge is maturing, there have been growing pains. â€œFor a long time, everyone knew cheating was going on and no one could prove it,â€ Mr. Feigenbaum said. â€œAll of a sudden they could prove it.â€

Over the past 18 months, he said, players have lobbed accusations and â€œvenomâ€ in online forums, debating the extent of the problem, degrees of wrongdoing and penalties.

â€œPeople are beginning to realize,â€ Mr. Feigenbaum said, â€œthat the mind sport that we love, if we donâ€™t do what we need to to protect it, it wonâ€™t be there anymore.â€

Some have called for suspensions, others for lifelong banishment, still others for a slap on the wrist. Players wondered why so many, including experts, would cheat. (Only a small group of professional players stand to make five- or six-figure paychecks from â€œsponsors,â€ who are often financiers or rich hobbyists who pay to team up with pros.)

â€œTheyâ€™ve caught people who everybody likes â€” normal people you would never in a million years think were cheating,â€ said Jenny Wolpert, one of the worldâ€™s top players.

Sylvia Shi, a high-level player who was suspended last year until 2023 for online cheating, apologized in an open letter: â€œI didnâ€™t do it for money, glory, results, victories, some sort of fulfillment, or masterpoints,â€ she said, referring to bridgeâ€™s ranking system. â€œI did it because it was so, so easy, and so tempting.â€ (Ms. Shi did not respond to requests for comment.)

A digital record of every trick

Online platforms not only simplified cheating, but they also left a record of every bid and card played. Players like Mr. Kamil began to analyze patterns of odd decisions that led to uncanny success. Statistical analysts like Nicolas Hammond, the author of â€œDetecting Cheating in Bridge,â€ noticed players who were suddenly competing beyond the abilities of bridgeâ€™s all-time best players.

Mr. Hammond, the chief executive of a software consulting company, created algorithms to parse the data and assess playersâ€™ performance.

He concluded that cheating pervades the game. He estimates that, based on data beginning in March 2020, about 2 to 5 percent of all pairs playing online were cheating, a figure that translates to several hundred players in the league.

â€œItâ€™s a horrible statistic,â€ he said, and, with a backlog of prosecutions, gaming officials are â€œnowhere close to addressing the problem.â€

Officials are also concerned about costs: Prosecutions can be long and painful, potentially leading to expensive litigation and the challenge of explaining bridge to judges or arbiters â€” in the actual, non-bridge judicial system â€” who donâ€™t play.

Defendants face similar dilemmas. Tobi Sokolow, a 20-time North American champion, said she resigned from the league last month to avoid the â€œcostly, time-consuming and extremely stressful processâ€ of facing a hearing. Mounting a defense would require hiring experts and a representative, analyzing hands and enduring a hearing that could last months.

â€œMy ethics have never once been questioned,â€ Ms. Sokolow, 79, said. But citing her age and her health, she said, â€œI did not feel I could handle a grueling ordeal.â€

Several players argued that cracking down on cheating among beginner or intermediate players was less important than stopping it at the top. And some argued that recent, prominent prosecutions had gone a long way to cleaning up the game, at least at high levels.

â€œBut the few people that got caught, it really mattered,â€ she added. â€œPeople are behaving much better.â€

A threat to bridgeâ€™s future

Players and officials also speak of a culture shift. â€œThereâ€™s a lot of pressure from the top players down to make players do the right thing,â€ said Mitch Dunitz, a player who prosecuted a case this year.

At a qualifying tournament in August for the World National Team Championships, 30 teams forfeited when faced with the prospect of playing against an Italian player who had been accused of cheating, a case documented this month by The New Yorker.

Cheating will always be a problem to some degree, Mr. Couchman said.

â€œWe probably need to get a better handle, and with more modern methods weâ€™re doing so,â€ he added.

He and Mr. Stephani said league leaders were also debating what resources should be devoted to prosecutions versus other projects, like teaching bridge to younger people.

â€œWe canâ€™t let cheating get so out of control it drives everyone away,â€ Mr. Stephani said. â€œWeâ€™ve got to do something to rebrand the game, reinvigorate it, and we need to keep it clean along the way.â€

The average age of league members is about 74, and membership is declining. Mr. Stephani, who is 54, said it was â€œnot uncommonâ€ to be the youngest person in a club.

â€œIf we donâ€™t do something for the survival of the game,â€ he said, â€œitâ€™s going to die with us.â€