Home World Afghanistan: The pledge binding al-Qaeda to the Taliban 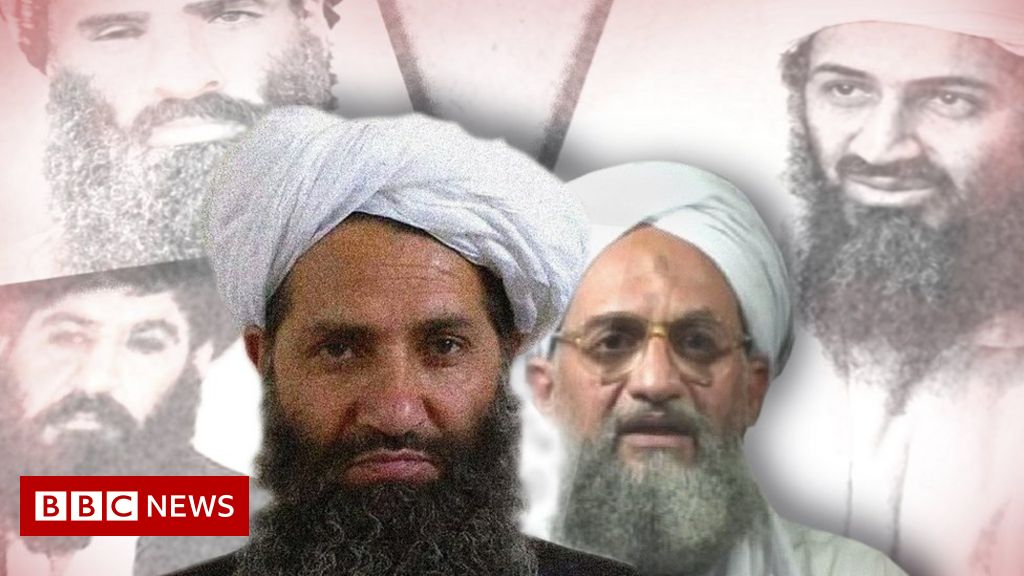 A key question arising from the Taliban’s return to power in Afghanistan is their relationship with their long-time ally, al-Qaeda.

Al-Qaeda is bound to the Taliban by a pledge of allegiance – or “bay’ah” – which was first offered in the 1990s by Osama Bin Laden to his Taliban counterpart Mullah Omar.

The pledge has been renewed several times since, although it has not always been publicly acknowledged by the Taliban.

Under the 2020 peace deal with the US, the Taliban agreed not to allow al-Qaeda or any other extremist group to operate in areas under their control. They reiterated this vow days after the takeover of Kabul on 15 August.

But they do not appear to have publicly rejected al-Qaeda either.

And al-Qaeda has certainly not softened its rhetoric towards the US.

Significance of the pledge

The Arabic word bay’ah is a term meaning a pledge of loyalty to a Muslim leader and is the foundation of fealty between many jihadist groups and their affiliates.

It entails obligations for both parties, including obedience by the one offering bay’ah to a leader. Reneging on the pledge is considered a serious offence in Islam.

In al-Qaeda’s case, it effectively subordinates it to the Taliban, by bestowing the honorific title of “commander of the faithful” upon the Taliban leader and his successors.

It was probably a factor in Mullah Omar’s refusal to hand Bin Laden over to the Americans after the 9/11 attacks, leading to the US-led invasion in 2001.

One famous example of the flouting of bay’ah came when al-Qaeda’s affiliate in Iraq refused to adhere to its pledge to central command, leading it to break away and later re-emerge as the Islamic State group (IS).

IS and al-Qaeda remain fierce rivals.

IS-K – Islamic State Khorasan Province – is the IS regional affiliate in Afghanistan.

Al-Qaeda is not the only jihadist group to offer bay’ah to the Afghan Taliban.

The Pakistani Taliban have previously pledged loyalty and recently renewed it after the takeover of Afghanistan.

Oath to a dead man

After Bin Laden’s death in 2011, his successor, Ayman al-Zawahiri, offered his pledge of allegiance to Mullah Omar on behalf of al-Qaeda and its regional branches.

This was renewed in 2014 after IS declared its caliphate in areas of Iraq and Syria.

But in July 2015, the Taliban announced that Mullah Omar had died two years prior. Embarrassingly, al-Zawahiri had offered allegiance to a dead man.

Al-Zawahiri renewed his pledge to the new leader, Mullah Akhtar Mohammad Mansour, on 13 August 2015, vowing to “wage jihad to liberate every inch of occupied Muslim land”.

Mansour quickly acknowledged the pledge from “the leader of the international jihadist organisation”, an apparent endorsement of al-Qaeda’s global jihadist agenda.

This is starkly is at odds with the Taliban’s own messaging, which restricts the group to the implementation of Islamic rule in Afghanistan and normal relations with neighbouring states.

When current leader Hibatullah Akhundzada assumed leadership of the group after Mansour’s death in a US air strike in May 2016, the Taliban did not publicly acknowledge the renewed pledge from al-Zawahiri.

This ambiguity over the current status of the pledge is at the heart of the ongoing uncertainty over the relationship between the two groups.

With their return to power, the Taliban are now being pulled in two directions.

Their ties to al-Qaeda lend the Taliban credibility within hardline jihadist circles, and the historic loyalty towards al-Qaeda means they may not be keen to abandon their ally now they hold power.

But the Taliban also remain bound by their obligations under the US peace deal, and the pragmatic approach to governance they have espoused.

Congratulatory messages from al-Qaeda and the group’s regional affiliates have heaped praise on the Afghan group for their “victory” and reiterated Akhundzada’s status as “commander of the faithful”.

The Taliban have not publicly acknowledged these messages, despite doing so for other groups like the Palestinian Islamist movement Hamas.

But the reported arrival in Afghanistan of Amin al-Huq – a close associate of Bin Laden – suggests that links between the two groups do remain.

And al-Qaeda reportedly maintains strong links with the Haqqani network, which is part of the Taliban.

The issue is illustrative of the essential dilemma facing the Taliban. On the one hand, they crave recognition on the international stage and the benefits that brings – but this is largely incumbent on their rejection of extremism.

On the other, they cannot easily disregard their alliance of more than 20 years with al-Qaeda.

To do so might alienate the more hardline among their militants and other extremist groups who have so fervently celebrated their takeover of Afghanistan.