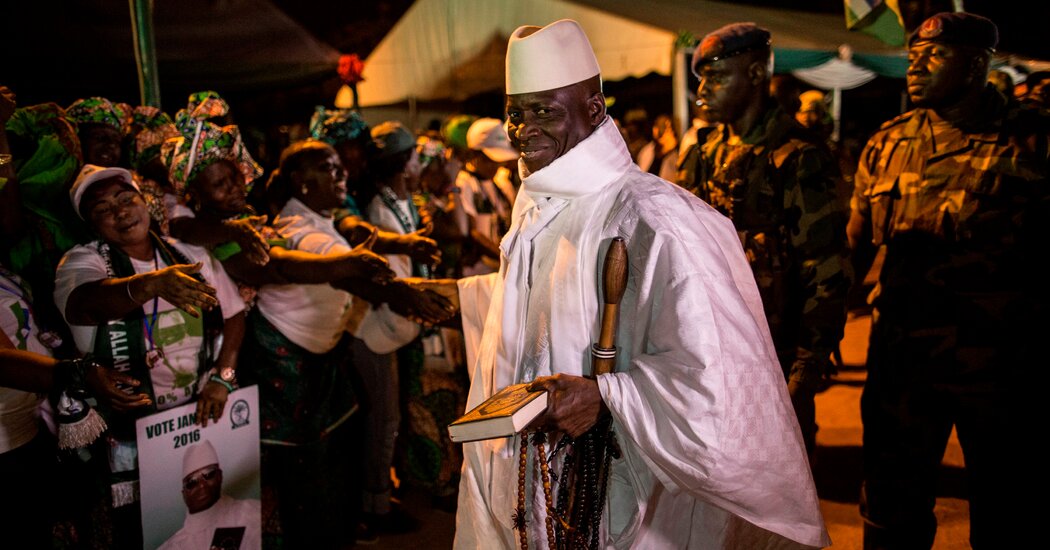 But the Truth, Reconciliation and Reparations Commission did not make public either its report or the names of people it had recommended for prosecution, leaving it unclear whether Mr. Jammeh, who governed for 22 years before going into exile almost five years ago, is among those who could face criminal charges.

In Gambia, a tiny sliver of a country on the Atlantic coast of West Africa, Mr. Jammehâ€™s fall from power in 2017 was greeted with jubilation.

But that mood has largely given way to disappointment with the government of his successor, President Adama Barrow, who is running for re-election. Mr. Jammeh and members of his regime have not been held to account, government reform proposals have failed or stalled, and Mr. Barrow has made a political alliance with Mr. Jammehâ€™s party.

â€œWe expect the president to show some commitment, and have the political will to fully implement the recommendations,â€ said Sheriff Kijera, chairman of the Gambia Center for Victims of Human Rights Violations. â€œJammeh should face justice at all costs.â€

When asked if the government would prosecute those most responsible for the abuses, the information minister, Ebrima Sillah, said by phone: â€œI cannot commit to that,â€ saying it would depend on the merits of the report.

The commission reported the deaths of 240 to 250 people in the custody of the state or its agents, as well as rape, torture, disappearances and witch hunts, its chairman, Lamin Sise, said in a press briefing outlining the findings in Banjul, the Gambian capital.

The panel held 871 days of hearings, streaming them live online in an unusually public airing of human rights abuses. Among the 393 witnesses who testified was a soldier who said he killed a prominent journalist on the presidentâ€™s order, and a woman, Fatou Jallow, who accused Mr. Jammeh of raping her.

The commission delivered its report to President Barrow, who is supposed to give copies within a month to the countryâ€™s National Assembly and to the United Nations secretary general.

That means it is not likely to become public until after the Dec. 4 presidential election. Among the candidates running against Mr. Barrow is Essa Faal, the investigative commissionâ€™s top lawyer.

Mr. Barrow has secured the backing of segments of Mr. Jammehâ€™s party, which is not fielding its own presidential candidate and still has considerable popular support. Advocating the prosecution of members of the previous government could jeopardize that backing.

Mr. Sillah, the information minister, said the president would have six months to review the report, after which the government would publish a document giving its response.

Mr. Jammeh first took power at age 29 in a military coup, and pushed through a new constitution concentrating power in the presidentâ€™s hands. His rule was marked by corruption and the suppression of political opposition, the press and L.G.B.T. rights. He claimed to cure H.I.V. with herbs.

But the government held a relatively free election in 2016, and Mr. Barrow defeated Mr. Jammeh, who refused to accept the results. Only after a military intervention by several neighboring countries in January 2017 did Mr. Jammeh relinquish power, moving to Equatorial Guinea.

Mr. Barrowâ€™s administration was supposed to be a transitional one, setting Gambia on the road to democracy. But the recommendations of a Commission of Inquiry into Mr. Jammehâ€™s finances were only partially implemented, and last year a newly proposed, more democratic constitution was defeated in the National Assembly.

The proposed constitution would have curbed executive powers and limited a president to two five-year terms. The term limit would have applied retroactively to Mr. Barrow, so he would have been permitted just one more term.

That left the Truth, Reconciliation and Reparations Commission as the only official path left for coming to terms with the Jammeh era. Its final report was originally scheduled to be delivered in July, but was delayed until September and then delayed again.

â€œWe have the truth,â€ said Baba Hydara, who has long campaigned for justice for the 2004 assassination of his father, the newspaper editor Deyda Hydara. â€œNow we need justice. Justice for my father, justice for all of Jammehâ€™s victims, and justice for Gambian society as a whole.â€