Home World USA A Spiraling Power Struggle? That Is the Least of Many Haitiansâ€™ Concerns. 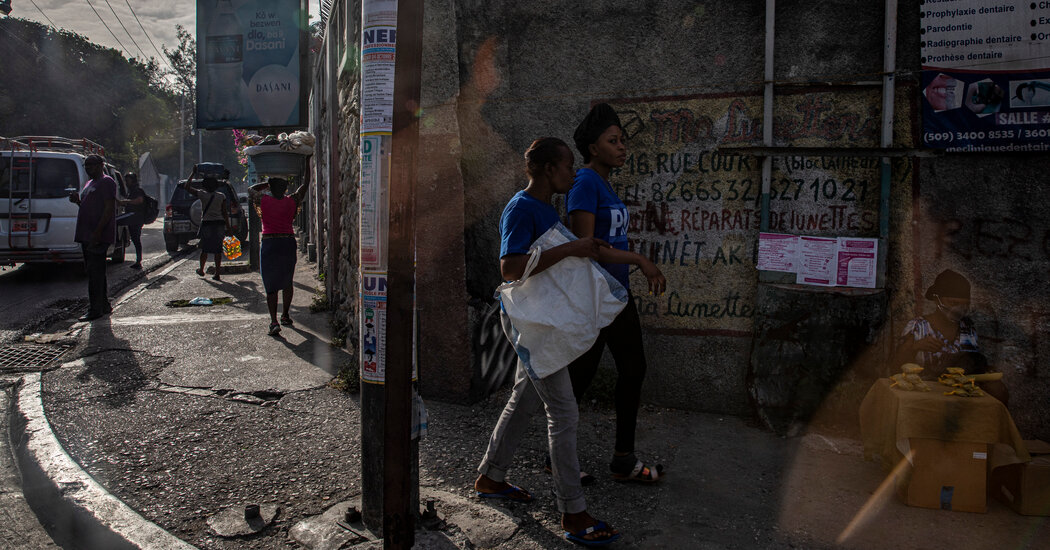 The countryâ€™s prime minister was linked to the presidentâ€™s assassination. A senator tried taking power. A shooting meant to stop the takeover paralyzed the center of the capital, Port-au-Prince.

The dramatic sequence of events unfolded over a single day, Tuesday. But most Haitians carried on with a shrug, seeing the struggle â€” if they noticed it at all â€” as another chapter in the infighting of political elites whose machinations have little bearing on their lives.

â€œThere is nothing that has ever worked well under any president I have known,â€ said Luckner Augustin, a 27-year-old handyman in Port-au-Prince. â€œThey only care about stuffing their pockets with money.â€

Long accustomed to turmoil, the Haitian population has found its resilience pushed to the limit by a cascade of overlapping crises in the past few months.

And then on Tuesday, a power struggle that has simmered since the assassination of Mr. MoÃ¯se in July burst into the open.

Outside the better-off neighborhoods in the hills of Port-au-Prince, few in the country have the energy to follow the jostling by political factions vying to fill the vacuum left by the death of Mr. MoÃ¯se.

After centuries of alternating neglect and repression, Haitians have learned to expect little from the political class claiming to represent them. They know they have only themselves to depend on for survival, many said.

Even the influx of foreign aid, intended to help after the devastation wrought by the earthquake of 2010, appears to have only deepened the countryâ€™s instability.

The dispute for the nationâ€™s leadership may be taking place on the doorstep of many Haitians in Port-au-Prince, but even so, it can feel far away.

The daily concerns for most are simple: finding their next meal tops the list, many said. Then there is the matter of trying to navigate the violent streets, where kidnapping is a constant risk, even for small children. Power, water service and fuel are sporadic; parts of the city have been made impassable by gang warfare.

The cumulative disasters and the sense that leaders come and go, but change little, have left many with low expectations.

â€œThe country is in the hands of a small group of people,â€ said Jean Remy Saint-Clair, a 65-year-old construction worker in Port-au-Prince. â€œA small clique lives well while the rest lives in misery.â€

Haitiâ€™s rural south has its own problems.

Residents there are still displaced and struggling to rebuild after the earthquake last month, which killed more than 2,000 people. Many are aware only dimly, if at all, of the latest twists of the political infighting that has paralyzed the government.

Mr. Saint-Lot said he would like to learn the truth about the death of Mr. MoÃ¯se. But as the investigation has descended into a morass of politicized and conflicting reports, he and others have begun to despair that the people behind the assassination might never be unmasked.

Mr. Henry, denying any connection with the crime, on Monday ordered the prosecutor, as well as the justice minister who used to oversee him, removed from their positions.

On Tuesday, the prosecutor issued an order prohibiting Mr. Henry from leaving the country, and laying out evidence that he said connected Mr. Henry to the assassination: telephone records that showed Mr. Henry had conversations with one of the chief suspects in the case after the killing.

But it is unclear what authority the prosecutor, Bed-Ford Claude, had to do so, since he had handed control of the case to a judge weeks ago and had been officially dismissed by Mr. Henry a day earlier.

Amid the political confusion, the head of the Senate, Joseph Lambert, attempted to have himself sworn in as president of the country on Tuesday evening â€” before the move was derailed by the eruption of gunshots in a crowd around Parliament in downtown Port-au-Prince, and by opposition from the international community, including the United States.

On Wednesday, small demonstrations erupted throughout the city as different political factions again took to the streets. The protests, which have disrupted traffic, have only added to the frustration of many Haitians.