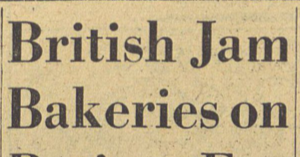 From the Herald Tribune Bureau.

LONDON, July 20. — At seven o’clock this morning British housewives began queueing in front of nearly every bakery in Great Britain, and within a few brief hours had bought out down to the last crumb the last unrationed bread which will be sold in this country for months to come.

Uncertainties over how bread rationing will work, even whether it will work, and the natural rush to buy freely for the last time combined to give bakers their maddest buying rush in history. It was all very orderly, for the British housewives have had long, sad training in queue standing. But orders of seven, eight, ten or twelve loaves were common.

The reaction of the bakers was not quite so patient though. All over England and Scotland they were saying the same things.

“The people have been going crazy,” a baker in Southeast London told a reporter. “They seem to have the idea that they can save the bread until Monday but with the quality of the loaves today it will not keep.”

“The pig bins will be full of bread by the middle of next week,” another London baker said. “This is chaos. I have never known anything like it. They’re simply clamoring for bread.”

In Liverpool a reporter was told: “I normally sell bread up to four o’clock on a Saturday, but all I can do today is clean up and do a bit of stock-taking. I put in an extra supply, but I’ve had a terrible time. Everything was gone before midday.”

Those that lasted until the middle of the day were exceptions to the rule. Many shops were sold out in half an hour and very few were still stocked after ten o’clock in the morning.

Bread rationing will use up several more sheets in the ample British food books, which were designed to handle just about any kind of rationing any government could think up. The squares already printed on these sheets now become “bread units,” and for each large pound-and-three-quarters loaf four BUs must be given up.

By American standards the size of the ration is fantastic — fourteen such loaves a week for a family of two adults and three adolescent children. The bread consumption in Britain today is 48 percent higher than pre-war and in a much-rationed country it is almost the foundation of diet.

Not only were complaints about the additional rationing heard on all sides today, but bakers say as well they are having difficulty getting scissors which they will have to clip the coupons next week.

The program, nevertheless, gets off to a shaky start on Monday. Everybody is bucking up their courage with the hope that it will not last long.